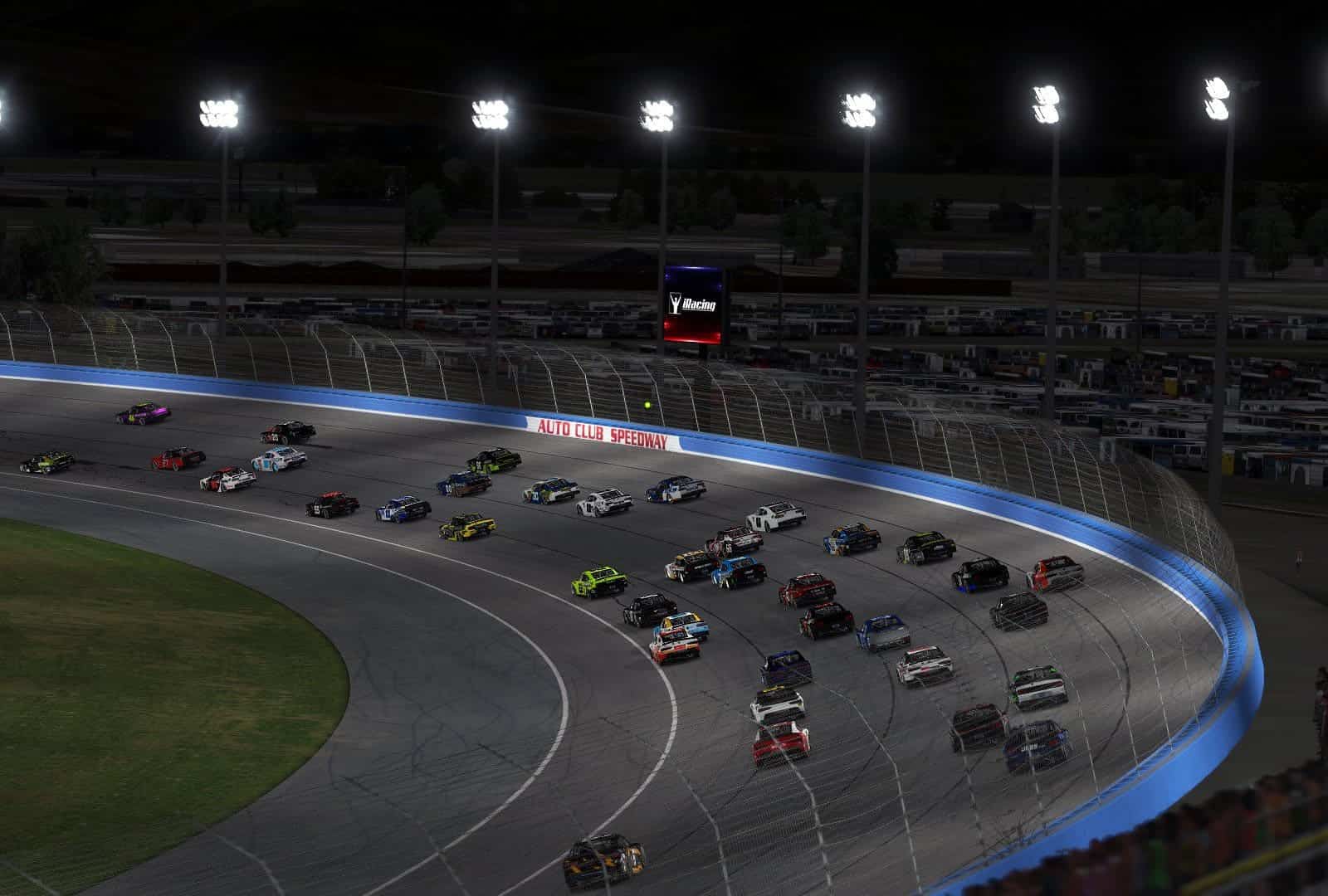 With Week 13 currently in progress, the community news is fairly light as compared to previous weeks.

On Tuesday (March 9), the service went down for a couple of hours in the early parts of the morning. When the service resumed, many virtual drivers wanted to test out as many features as they could.

The new build brings a myriad of changes to the oval side of the iRacing service. By all means, it was a mostly positive response.

The latest issue of The Virtual Frontstretch looks into some of the feedback from the first few days post-build, as well as FTF Racing and Monday Night Racing events that occurred before the new build last week.

Most notably, the dynamic track feature for many of the big ovals seems to have updated for the better. In the previous build, many lamented that there was only one line on every track that was usable, with other lines around the track either much slower or harmful to the virtual tire compound. Also, the rubber build up on the surface wouldn’t change much during the complexion of the event, which would normally force drivers to find other racing lines to gain speed.

I can't stop marveling at the racing so far with this combination. pic.twitter.com/4tSrNerZE2

With the update, multiple grooves seem to be competitive with the fastest lines moving around the track depending on which lines have the most usage. iRacing communities such as eRacr.gg and MoonCar rallied the troops to test a multitude of new features. As did some top oval drivers with hosted sessions.

Besides the intermediate changes for the better, the superspeedway drafting model got an overhaul during the update. With the NASCAR Cup Series cars, it’s now possible to side draft opponents, as well as tandem and utilize the bubble effect. The changes bring more skill into the equation and less gridlock among pack races.

This is the only thing I’ve ever wanted on this sim I couldn’t care less about multi groove racing haha, thank you @iRacing!!!!! pic.twitter.com/urMg4XioBp

Finally, the dirt tires on all NASCAR vehicles have given many a first look at how NASCAR Cup Series cars will react on a Bristol Motor Speedway covered in dirt. The Monday Night Racing drivers played in the mud on Tuesday and Wednesday for fun and even virtually cosplayed some real NASCAR drivers for promotion of the upcoming eNASCAR iRacing Pro Invitational Series on FOX Sports.

Overall, the update has many strengths, but there are still some opportunities to improve. One glaring error seen in many lobbies with cars utilizing the New Damage Model (NDM) is that it’s causing many drivers’ games to crash and lock up. Some examples include eRacr.gg’s 1987 car race on Tuesday at Talladega Superspeedway, FTF Racing’s 1987 car race at legacy Daytona International Speedway on Friday, multiple official street stock lobbies at Charlotte Motor Speedway and some Mazda MX5 Miata races.

FTF Racing forced the game to utilize the old damage by adding a car to the field of choices that utilized the old damage model, and it fixed their problem for the night. Unfortunately, in official races, it seems to be an issue that might not get fixed until the next hot-fix patch.

Short tracks just seem to bring out the worst in many on the iRacing simulator, no matter where it happens. Twenty-one caution flags marred what was, at times, some decent action at the Nashville Fairgrounds Speedway on Sunday night.

Hocevar led 225 laps on the night, sweeping both stages and earning maximum driver and owner points. Kollin Keister, Blake Reynolds and Michael P. Frisch also took turns leading at one point or another. However, Hocevar was the dominant car all night and quickly found his way back to the front every time.

After ramming his virtual car back and forth between the outside wall and the pit wall, Hocevar joked that he had to pass post-race technical inspection considering how fast he was compared to the rest of the field.

“I had to make post-race tech,” Hocevar said. “The boys back said you’re going to have to knock the nose and the rear-end off the car to pass through inspection.”

All joking aside, Hocevar climbs up to eighth in the standings and has made it clear that if he intends to run the full season, he could be a threat for the championship.

Not the cleanest race ever, but hey, I'll take 21st running one of my favorite Sam Bass schemes. Appreciate @FTFRacingLeague putting on a Cup race at the Fairgrounds.

Bigger and better things coming next year for this event. Focus is on Darlington event prep/content in Sept? pic.twitter.com/GFqaLLO7P5

Ryan Doucette finished in fifth, and with Michael Guest taking the night off, Doucette was able to claim the points lead after four races. Guest still leads the playoff standings with his two victories and 12 playoff points.

Next week, FTF heads west for 300 kilometers at the legacy version of Phoenix Raceway in the Racing boi short Live! 300k.

Only two races remain in the second season of Monday Night Racing presented by Tufco Flooring.

The diverse group of industry members and real-life racing talent took to the virtual streets in Montreal at Circuit Gilles-Villeneuve for the Big Green Egg Porsche Challenge, the first race of two in the Round of 7.

A win would automatically advance any of the seven remaining playoff drivers to the Championship 4, but it was not meant to be on Monday night as Stefan Wilson and James Davison stole the show.

In 50 minutes, 31 laps were able to be completed with one halfway caution. Davison led most of the laps, 23, but found trouble during the midway pit stop that cost him his speed. Davison filled up the fuel tank and slowed down his car as compared to his competition. Still, Davison was able to lead, but Wilson was closer than he had been all night.

In the closing laps, Wilson went low on Davison heading into the hairpin, and the two made contact. It was enough to move Davison out of the groove and into an offensive mode. Due to the disadvantage he gave to himself, Davison wasn’t able to catch back up. Wilson took the victory, the first of his Monday Night Racing career.

.@stef_wilson finally punches through for his first career MNR win at Montreal.

In the playoff race, nobody is safe heading into the penultimate race of the season. Nick DeGroot leads the standings by two points over Anthony Alfredo. Will Rodgers and Preston Pardus both currently sit above the cut, while Matt Stallknecht and Max Kennon both sit below. Gabe Wood missed the event due to oversleeping and will need to win at Auto Club Speedway in order to advance to the next round.

Frontstretch editor Michael Massie took the night off, while I wound up in an incident with Greg Stumpf on the first lap, coming home in 20th.

FINAL LAPS: @stef_wilson gets around @JD33Davison with a few minutes to go to take home his first career MNR victory in Montreal#BigGreenEggChallenge | @BigGreenEgg pic.twitter.com/WpgQQqCpA3

FTF Racing is going back in time to just a short while ago, to when Phoenix Raceway didn’t have a gigantic apron runoff area. The Racing boi short LIVE! 300k will go live on Sunday night at 8 p.m. ET on BottomSplit.

Monday Night Racing Presented by Tufco Flooring wraps up the Round of 7, utilizing the NASCAR Xfinity Series vehicles at Auto Club Speedway on Monday night. The action will be live on the secondary Podium eSports channel, Podium 2, at 8 p.m. ET.

The INDYCAR iRacing Challenge returns for a three-race limited series this week. Last year, the Challenge included many top drivers currently competing in the series as well as some invited guests such as Dale Earnhardt Jr. and Kyle Busch. The first race is at Circuit Gilles-Villeneuve on Thursday night, live on INDYCAR.com at 6:30 p.m. ET.

Both the eNASCAR Coca-Cola iRacing Series and the eNASCAR iRacing Road-to-Pro return this week. Brandon Hauff will have the Frontstretch recap for the Coca-Cola event on Tuesday, while the Road-to-Pro Series events will go off on Thursday night. The top two splits will be broadcasted live, the top split on Podium eSports and the second on STN Racing, both going live at 9 p.m. ET.

TWEETS AROUND THE VIRTUAL COMMUNITY

Here are a few tweets that stood out on social media last week.

Marcus Lemonis is having a painting contest, and some of the replies include some absolutely stunning ideas from some of the best iRacing graphic designers out there.

$20, 000 prize money for the Top 3 best @CampingWorld designers . You work hard for all of us!! Must enter using #campingworldwinner . I’ll select the top 6 , the fans will pick the winner #campingworldnascar pic.twitter.com/DmYOmnAUIt

Continue to send positive thoughts and prayers toward Kickin’ The Tires’ Seth Eggert and his family as they mourn the loss of Seth’s mom, Bryna Eggert.

Mom is no longer in pain or suffering anymore. The hospital called. She passed away, peacefully, at 1:20am this morning.

I miss you Mom.

So I’ve just been told that we’ve signed Moonhead, not Spanky. Help us welcome an equally iconic figure in the sim racing community, @itsmoonhead! We’re beyond excited about having him join the team! This is going to be fun! ? pic.twitter.com/COMJ1fH9vY

I wonder if this “Happy Camper” pitch from Moonhead to Marcus Lemonis helped make that officially happen.

Finally, it’s been a year since the COVID-19 pandemic shut down live sporting events. The eSports and iRacing wave started for a multitude of reasons, but the eTruck Series Night in America by Ryan Vargas was definitely one of the catalysts.