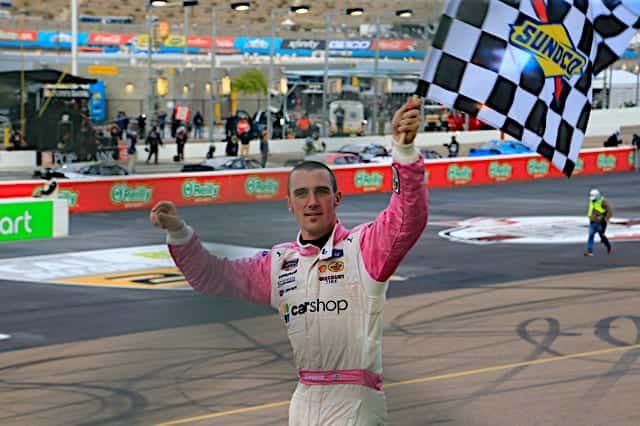 To say restarts on the current Phoenix Raceway configuration are crazy, especially late-race restarts, is putting it lightly. While pandemonium unfolded behind Austin Cindric in the Call 811 Before You Dig 200 on Saturday (March 13), Justin Allgaier in the final made a move on his outside, entering turn one on the final restart with two laps to go. As they worked through turn two, Cindric drove his No. 22 Car Shop Ford Mustang high, getting the win-hungry Allgaier into the marbles. Allgaier slammed the wall, and Cindric drove away to a second victory.

In only his second career Xfinity Series start, Ty Gibbs had a strong car but was the beneficiary of other’s misfortunes with a second-place finish. Brandon Brown was third, a career-best, and Riley Herbst and AJ Allmendinger rounded out the top five. Bayley Currey, driving for Mike Harmon, finished seventh – his best career finish and first top 10.

There was plenty of good that came out of Saturday’s Call 811 Before You Dig 200. But, let’s begin with restarts, which at Phoenix, are arguably the best you’ll see on any NASCAR schedule. After drivers cross the start/finish line, the field fans out to five-wide and more!

Then, they must funnel back down to two or three-wide like an interstate highway with multiple lanes ending suddenly. Next, momentum and lane choice plays a huge role in deciding who gets the best exit off of turn two and down the backstretch.

There were eleven restarts, giving fans in attendance and those watching from home plenty of drama to watch. In a race that lacked more or less great racing into a run, the numerous cautions were a blessing for the entertainment value. The unfortunate side is TV didn’t do the restarts justice for fans watching at home.

Good runs and results in racing are partly created by capitalizing on the misfortunes of others. Several front-running contenders were knocked out of the race, allowing drivers like Colby Howard and Stefan Parsons to run inside the top 15.

Meanwhile, J.J. Yeley and oval greenhorn Jade Buford clicked away laps inside the top 10! These types of runs are always pleasant to see when the top runners have issues.

Riley Herbst had a quiet day, floating around the brim of the top 10 for most of it after starting 30th. On the final restart, he was 10th but survived the carnage to finish fourth.

That is his first top 10 and top five with Stewart-Haas Racing. It is also his first top-five in the Xfinity Series since Darlington last September. Maybe this will be a springboard for him and the No. 98 SHR team who have struggled for results in 2021.

A final good thing to come out of the Xfinity Series race on Saturday was Josh Berry’s personality. In an age where racing drivers, particularly those in NASCAR, are considered too corporate pleasing and well-spoken, Berry let his feeling be known to Santino Ferrucci following an on-track incident. Berry had pitted for scuff tires on Lap 134 and sped on pit road in the process before being sent to the tail end of the field.

As Berry battled his way back up the running order, he was pushed up high by Ferrucci off the exit of turn two. Berry’s No. 8 Chevrolet slammed the wall viciously, came down, and was tagged in the left rear by Blaine Perkins in the No. 23 for Our Motorsports, who was making his Xfinity Series debut. As Berry entered turn three, his tire gave way, and he crashed into the outside wall.

Berry made it clear to Ferrucci about his feelings after the accident, as the JR Motorsports driver gave him the double bird before entering the safety vehicle. That was a glimpse into what makes local short-track racing great. Drivers will let their feelings be known, as there aren’t thousands or millions of people watching at home on their television and a potential phone call from a sponsor to answer to on the following day.

NASCAR needs more personality after a driver exits a car in disgust like Berry did today. Other examples include Chase Elliott in May of 2020 at Darlington or Christian Eckes at Texas last October and, dare I say, like when Kurt Busch showed his displeasure to Jimmy Spencer at the 2002 Brickyard 400.

All of these fuel conversation on social media because immediately afterward, NASCAR Twitter was all over it. We need to see more personality without consequence like this in NASCAR, especially on Sundays.

With a restart with two laps to go, you can bet things are going to get crazy. Drivers are only going to take and give nothing in return. Jeb Burton did a lot of taking on the final restart. He drove his No. 10 Kaulig Racing Chevrolet very low and very deep into turn one.

Remember that saying that eight tires are better than four? Well, Burton used 12. His car’s right side first met up with third-place runner Daniel Hemric, who had battled back up to the top three following a poor stint and speeding penalty.

Hemric’s Toyota then ran into Burton’s teammate, Justin Haley, who slammed the wall hard. Burton has been aggressive on late-race restarts in 2021. Once again, you could say it paid off for him as he finished sixth, though it was only a lateral move as he restarted sixth, as well. But Hemric finished 23rd and Haley 26th, each of whom had top 10 runs.

Just when you thought JR Motorsports had gotten the monkey off its back, it jumped back on and didn’t play nice. In the first quarter of the race, JRM had all four cars inside the top 12. But troubles began on Lap 68, five laps after a restart.

Noah Gragson’s No. 9 Chevrolet was leaking fluid during that restart and left a visible trail in his wake. Shortly after, the engine gave way, with smoking and fire escaping his machine. He was running fourth during the restart.

Then, after the caution for the second stage’s conclusion was displayed, Michael Annett directed his No. 1 Chevrolet behind the wall with engine issues. It’s not the way Annett wanted his 300th career Xfinity Series start to go. Gragson finished 39th while Annett placed 38th.

Josh Berry had a solid day going as he ran as high as third before the incident between him and Santino Ferrucci left him with a 36th place finish. Better still, he ran inside the top 10 often, which makes this result even harder to swallow.

Justin Allgaier had a great car during the closing laps. Ultimately, Allgaier finished eighth after hitting the wall with two laps to go as he battled eventual race-winner Cindric for control of the race. This was Allgaier’s first top 10 of 2021 and was JRM’s silver lining in what was another dismal weekend for the perenneial Xfinity Series powerhouse.

I am no longer considering Brandon Brown an underdog for top 10 results, but Brown ran in and around the top 10 for a large portion of the race. He restarted 11th on the final restart and survived the chaos in front of him to earn a career-best third-place finish.

That bested Brown’s fifth-place finish from last October at Texas Motor Speedway, his only top-five entering today’s race. It is hard to say that Brown is an underdog for top 10s as he is often knocking on that door, if not down. But he is still an underdog when it comes to top-five finishes.

No Cup Series points-regulars were in the race, but Justin Haley, J.J. Yeley, and Timmy Hill will all compete in tomorrow’s (March 14) Instacart 500. Yeley and Hill finished back-to-back in 13th and 14th, and as mentioned before, Haley finished 26th.

“Looks like we just got ran over by AJ (Allmendinger). I’ll keep a notebook of all this stuff and use it in my future.”- Brandon Jones

“Look, it’s data points. You have to work hard the rest of the year to get here (Champion 4 race). That’s where my focus is. I got my name up on the wall right there, and the goal is to be back with a shot to do it again.” – Austin Cindric

The race played out fine, despite some sub-par green flag racing. However, it was certainly tough to watch when Harrison Burton and Brett Moffitt spun late with no spare sets of fresh Goodyear tires in the pits.

Xfinity teams were only allocated four sets of tires for the race, which one of the four had to be put on for the start of the race. That meant that only three pit stops for four fresh sets of tires could happen.

In other races this season, Xfinity teams were allocated five sets. A fifth set would undoubtedly have been a friendly insurance policy for every team. I understand that not allocating the fifth set saves teams money. However, I can’t help but feel that tire strategy in the final stages of today’s race would have been that much more exciting, especially in the final stage, which saw six caution flags.

Atlanta Motor Speedway plays host to the NASCAR Xfinity Series next Saturday (March 20) for the EchoPark 250. Coverage begins at 5:00 p.m. on FS1 and PRN. The Xfinity competitors then have a two-week spring break before returning at Martinsville Speedway for a 250-lap race (April 9). Then there is another weekend off before the Ag-Pro 300 at Talladega Superspeedway (April 24).

Would someone please explain to me why the ARCA series can have practice and qualifying but the 3 NASCAR series can’t?

I want to see Ty Gibbs win all his races. Just to see how obnoxious and displeasing he can celebrate, while thanking the Lord above.