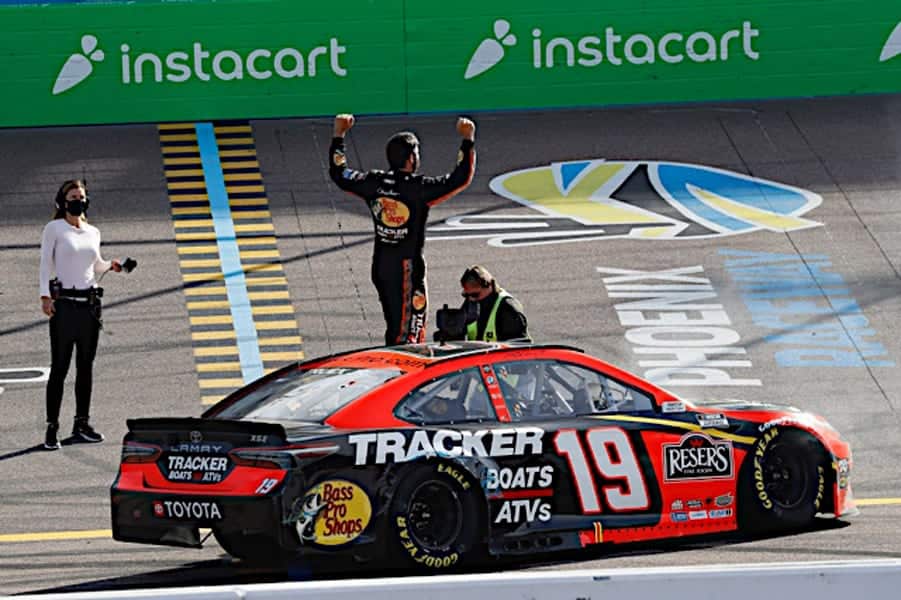 On a sunny Sunday (March 14) afternoon at Phoenix Raceway, Martin Truex Jr. finally snapped a 29-race winless streak and returned to victory lane in the 2021 Instacart 500.

It took a while for Truex’s car to come to him, especially after brushing the wall early on. But the driver of the No. 19 led 64 laps overall, coming alive in final stage and scoring his 28th career victory after passing Joey Logano on the race’s final restart on lap 288.

“Just an awesome job by everybody,” Truex said in his post-race interview. “…Really solid, I thought at the beginning of the race, we were going to run 15th or so. I can’t really believe it, I’m just speechless. Phoenix has been a tough one for us, and to come here and win this – I wish it was [the championship race in] November. Hopefully, we can come back here and have a shot at it in the final four.”

The race ended an 0-for-30 career drought for Truex at a place where he had just four top-five finishes entering Sunday. But after an ugly start, hitting the wall within the first 25 laps of the event, crew chief James Small was able to fine-tune Truex’s Toyota and get the No. 19 fine-tuned for long-run speed.

“With the track being the way it is,” Truex said, “This tire wearing out, the track getting as slick as it is, we were good enough to win. That’s really what it’s all about.”

Keselowski, though, fell back into the clutches of Denny Hamlin, who was out front when the competition caution flag flew at lap 31. Kyle Larson sped on pit road during that round of stops, while Team Penske stablemates Keselowski and Ryan Blaney led the field off pit road.

Alex Bowman became the first victim of an accident, spinning off the bumper of Austin Dillon. Ross Chastain, in front of Bowman, had checked up and created an accordion effect that sent the No. 48 into the wall.

A stack-up results in disaster for @Alex_Bowman!

He gets turned and the caution comes out at @phoenixraceway. pic.twitter.com/8TLGAEq4Bn

Once racing resumed, Blaney held the lead and won the opening stage. His teammates Joey Logano and Keselowski followed his lead.

Stage two was mere laps old when yet another caution flew, this time for Anthony Alfredo and Cody Ware. Alfredo had been running in the high lane and Ware sent the No. 51 into the corner, crashing both cars and sending the No. 38 to the garage.

Logano’s car began to further settle in and he led the way for a majority of that stage. Corey LaJoie led for a while as he stretched fuel, but was eventually forced to pit road, paving the way for the No. 22.

Larson, a week after he went to victory lane at Las Vegas, was the only real competition for Logano. However, green flag pit stops midway through the stage sent the No. 5 team reeling.

Larson sped on pit road, forcing a pass-through penalty that left him down a lap. He had climbed back to 13th by the time the green-and-white checkered flag flew but never got close to the front again.

The second segment went to Logano, his first stage win of the year. In the final stage, his race nearly took a downward spiral on the restart, when Martin Truex Jr. got into the back of the No. 22 and almost spun the Penske Ford.

With less than 100 laps remaining, the top 15 was peppered with intriguing names: Bubba Wallace, Ricky Stenhouse Jr., Chase Briscoe and Erik Jones were all on the lead lap. Truex, meanwhile, had taken the lead from Logano and set sail as Joe Gibbs Racing teammate Hamlin battled with Logano for second.

Wallace made his way to seventh, passing William Byron, Kevin Harvick and others, as all JGR or JGR-allied cars ran in the top 10 but Kyle Busch. Busch sat one lap down in 23rd at the time, continuing a frustrating day for the No. 18 team after an uncontrolled tire penalty forced an extra green-flag pass-through.

Green flag pit stops had just happened when the caution flew yet again for Tyler Reddick. The No. 8 had smacked the outside wall and the yellow triggered another round of stops. Wallace stayed out, Logano won the race off pit road and the pair headed up the field for the green flag.

The No. 23 fell back quickly as teammates Keselowski and Logano battled for the top spot. Another caution flew, this time for Kyle Busch, who was tagged by Chastain on the frontstretch.

Yet another restart led to Truex regaining the lead with Logano behind him, while Hendrick teammates Larson and Chase Elliott dueled behind them for a spot in the top five. Truex clambered out to a lead of over a second, cruising to his first victory since Martinsville last June.

The normally mild-mannered Truex was animated in his post-race celebration, repeatedly thanking the fans both in the stands and campgrounds around the facility.

“So thankful, so proud of everyone at JGR,” Truex said. “…The more [fans] the [more, the] merrier, we miss seeing them in the infield. …We miss pre-race, we miss qualifying, we miss practice just like everybody else. It’s great that we’re able to have a good crowd here and Phoenix is always awesome. …I’ve got an awesome team and we had a tough year last year, little bit up and down, a little bit rocky, but really proud of them. That was a hell of an effort today by everybody.”

A total team effort went into the No. 19's victory today.@MartinTruex_Jr got the W despite early contact with the wall. pic.twitter.com/8wgP4TFAfW

The Cup Series returns to the east coast next week to take on the 1.5-mile oval of Atlanta Motor Speedway. The Folds of Honor QuikTrip 500 is set for Sunday, March 21 at 3 p.m. ET, where Harvick won the division’s lone visit to the track last year.