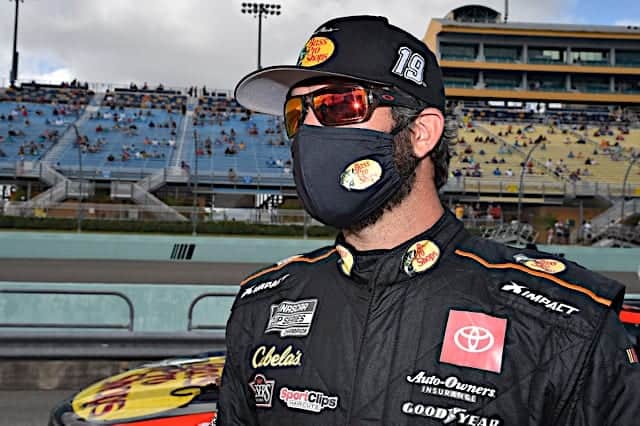 About an hour removed from scoring his first win of 2021 on Sunday (March 14) at Phoenix Raceway, Martin Truex Jr. revealed that he would run for Kyle Busch Motorsports in the Camping World Truck Series’ dirt race at Bristol Motor Speedway.

The start will be Truex’s first in a truck since 2006. He ran two races between 2005 and 2006 for Billy Ballew at Milwaukee and Michigan, respectively, scoring a best result of 19th at the former.

“I’m excited about it,” he said. “I’ve only raced twice on dirt. Both of them were at [Ken] Schrader’s charity race out in Missouri. Did that a few times in a  modified, so that was really the only times I raced on dirt other than growing up on four-wheelers and motorcycles.”

Truex was informed in his post-victory press conference that sponsor Auto-Owners Insurance had inadvertently revealed the event on their Instagram.

Truex also for KBM with auto owners insurance as a sponsor, they posted this on their insta a while back but pulled it like an hour after they posted it. pic.twitter.com/0dbxepltdt

Question asked by @Knighter01, @MartinTruex_Jr confirms that he will run the Bristol Dirt Truck race after @AutoOwnersIns posted on IG.

“It’s going to be a learning curve for sure,” he added, “but I look at it as Bristol’s been our worst track for the past couple years. Why the heck not lay down dirt and see what we can do this way? I think it’s gonna be fun and a new challenge. Something different.”

The number for Truex’s truck has yet to be revealed.

Truex and the rest of the field will take to the dirt on Saturday, March 27 at 8 p.m. ET.