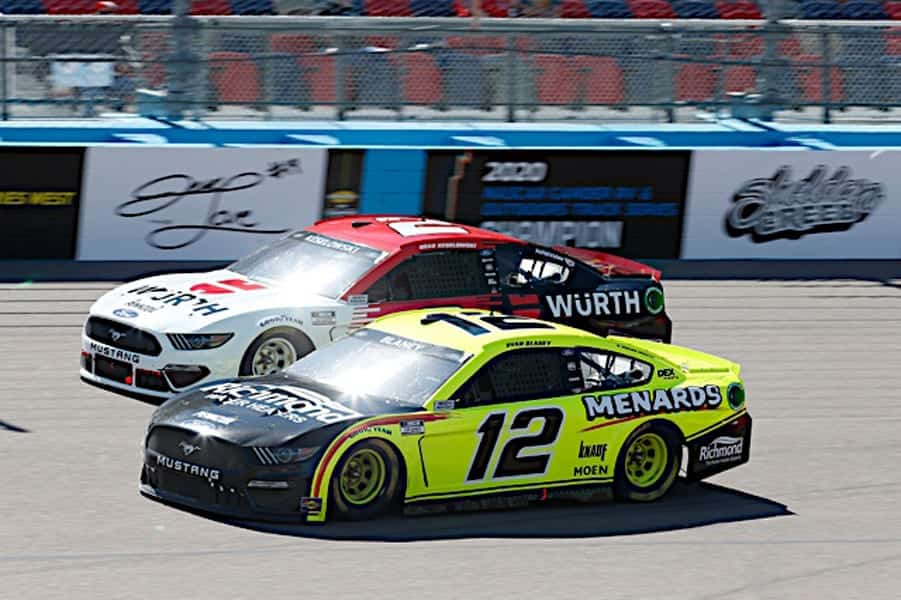 All three Team Penske cars finished Sunday’s (March 14) race at Phoenix Raceway in the top 10, but it could’ve been so much more for the trio.

All three Penske cars began the fifth race of this NASCAR Cup Series season with good starting positions via the metric qualifying system. Brad Keselowski started first, Ryan Blaney in eighth and Joey Logano in ninth. Both Keselowski and Logano have been victorious at Phoenix before, with Logano winning twice at the 1-mile oval in Cup and Keselowski twice in the NASCAR Xfinity Series.

This came after the trio ran inside the top five for much of the race. When the first stage concluded at lap 75, it was Team Penske 1-2-3, with Blaney nabbing the stage win, Logano in second and Keselowski in third.

Logano and Keselowski continued to run up front, combining to lead 19 straight laps as the final stage stayed green. However, a lap 283 caution reset the field for the ultimate final restart.

On the restart, Truex took the lead and set sail to the victory by leading the final 25 laps.

Despite acknowledging Truex had the fastest car once the race restarted, Logano took some positives away from this race in Avondale, Ariz.

Finishing P2 sucks, but it was definitely a solid day at the track. Led the most laps. Finished P2 in Stage 1. Won Stage 2. And the 22 Pit Crew nailed it all day long. We’ll be in Victory Lane soon! pic.twitter.com/yAAiwUIkPo

“I’m usually the one to beat myself up on the parts where we missed it, but the positives will keep the momentum going,” Logano said in his post-race Zoom call. “I couldn’t be prouder of our pit crew today. They’re animals! That’s great that they kept us in the race when we started to lose a little bit of handling in our car.

Logano, who entered the race as the defending spring Phoenix race winner, led a race-high 142 laps. It was the most laps he’s led in a race since he led 125 in the Phoenix race last November.

“I’m not sure if we were a few balance adjustments from beating the No. 19; he was fast,” Logano said. “It showed when he ran us down at the second stage from four seconds. It was like, ‘Okay, he’s going to be really quick.’

“I was hoping I could get him on the short run. Once he got more than a second ahead of me, he went into cruise control and started saving his stuff. We weren’t fast enough. We were able to get our balance close at the end of the second stage; just seemed like the No. 19 and the No. 11 were able to roll with more speed, more grip. That’s a hard thing to find by the way.”

Logano has failed to win thus far this season, but it certainly isn’t from a lack of speed in his No. 22 Ford.

Joey Logano was in position to win 3 of the first 5 #NASCAR races. He won 0.#Daytona500: Leading on white-flag lap, wrecked#DaytonaRoadCourse: Passed with 2 laps to go by Christopher Bell
Phoenix #Instacart500: Leading until final caution for Kyle Busch spin, beaten on restart

Keselowski led 19 laps, but the pre-race setup to his No. 2 Ford cost him in the end.

“We just could never get the car quite as good as last year,” Keselowski told FOX post-race. “We tried a few things to be better for the championship race here this fall, and I’m not sure it went the way we thought it would. Learned a lot; we were really solid. We’ll build off it. We’re clicking off really good runs here, Jamie [Little], and that’ll transfer to wins.”

Although Blaney was the lowest-finishing Penske driver, he led the third-most laps (35), trailing only Logano and Truex.

After five of the 26 races in the regular season, nearly 20%, Blaney is 13th in the playoff standings, 24 points above the cutline.

Phoenix will host the Championship 4 race for the second straight year this November, and Logano noted that race will likely mirror the one on Sunday. That gives a lot of promise to the Penske trio.

“You’ll probably expect the same thing you saw last year,” Logano said of the Championship 4 race. “The tire has a decent amount of falloff, which presents a decent opportunity for some strategy. As we saw today, if a caution comes out five-10 laps into a run, it creates quite the question of what to do.

“That’s a good thing where it’s not just a no-brainer of pit calls, and I like how that splits the field up. The fastest car is able to win the race, and I think that’s happened the past three or four times here. That’s fair; that’s what we all want. But it’s the opportunity to have something good happen, you have a good pit stop or a good restart, where you can do some big moves as well.”

With Penske going winless so far, it marks the first time since 2018 that Penske hasn’t won in the first five races of a season. But with the speed the team showed Sunday, that win is likely coming sooner than later.