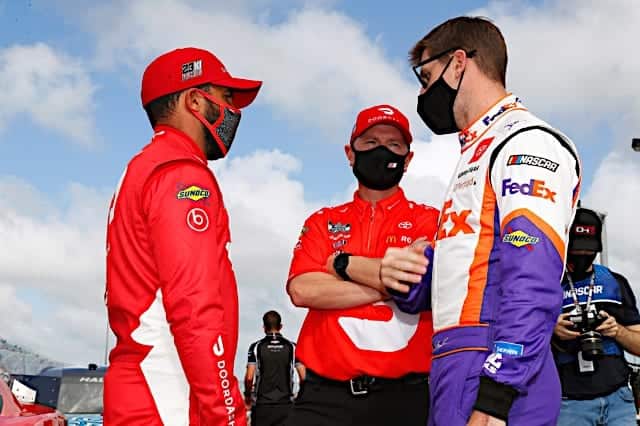 On paper, the results of the Instacart 500 at Phoenix Raceway on Sunday, March 14 did not manufacture eye-popping runs from the NASCAR Cup Series underdogs. However, that was not the occurrence for most of the race. While a few hungry hounds had brushes in the top 10 today it was Bubba Wallace leading the way with a 16th-place run.

While new teams are expected to experience a few bumps along the way, 23XI racing has had a particularly dismal start to the season with a crash in the season opener at Daytona International Speedway and three straight finishes outside the top 20 heading into Phoenix. While there are still many wrinkles to iron out, Phoenix was a good stepping-stone toward heading in the right direction. For most of the race, Wallace appeared to be destined for a possible 20th. He ran around the 16th-21st positions for most of stage one before the car began to come to him, resulting in a 14th-place stage finish. In stage two, Wallace was able to flirt inside of the top 15 for a little while before settling for 19th at the green-white-stage checkered.

The final stage may have been the strongest we have seen Michael Jordan’s new team so far in 2021. With just over 80 laps remaining, Wallace drove into the top 10. A handful of laps later found the No. 23 passing 2014 NASCAR Cup champion Kevin Harvick and then Ryan Blaney. The Mobile, Alabama native got as high as seventh on the run before green flag pit stops began to commence. A caution followed the green flag stops cycle about 10 laps following Wallace’s stop.

While most of the field took the opportunity to pit for fresh tires and fuel, Wallace and crew chief Mike Wheeler opted to stay out. The move went sour as Wallace dropped to the advantage of other drivers’ tires. Then, in the closing laps, Wallace made contact with Cole Custer, hampering the handling of his car for the final few laps of the race.

The No. 23 McDonald’s Toyota was able to cross the start/finish line with a season-best 16th. But he must be wondering what might have been as, once again in 2021, the team showed speed that was better than their final result.

A few drivers in the NASCAR Xfinity Series were able to create some heat in the desert at Phoenix Raceway too, but it was the concluding moments of the race that led to a big day in the dog yard. After Jeb Burton slid into Daniel Hemric causing multiple drivers to slap the wall, a few drivers took advantage of it to muscle out incredible finishes. Among them was Bayley Currey. While Brandon Brown grabbed his best career finish on a non-superspeedway in third, Currey cemented his first career top-10 finish in his 55th start. Driving the No. 74 for Mike Harmon Racing, Currey spent most of his day outside of the top 20 with stage finishes of 25th and 23rd, respectively.

With just over 60 laps to go, Currey entered the top 15 and stayed there for the majority of the final run. When the yellow flag flew, instituting an overtime restart, the 24-year-old had to be licking his chops running in 12th. When chaos struck on the restart, Currey guided his No. 74 through it and earned a career-best seventh as a reward.

I cannot talk about the Instacart 500 without giving a shout out to Erik Jones. While he finished 20th, the 24-year-old followed up his first top 10 of 2021 with a solid outing in Phoenix. Jones found himself inside the top 10 on multiple occasions throughout the race before settling with a top 20. Daniel Suarez recorded a solid 21st for the newly formed Trackhouse Racing while Michael McDowell’s four-race top 20 streak came to an end with a 23rd-place run.

Brown has a lot to be excited about right now in the Xfinity Series. He has three top 10s through five races and sits ninth in the points standings.

“Honestly, this was one of those things where we knew we needed a good start,” Brown told NASCAR.com. “We didn’t expect this hot of a start, but we knew we needed a good start — better than last year — just because of how stout the Xfinity field is now with cars added, drivers added with a full season. Just one of those things where those spots where we kind of nudged our way in, you’re not going to be able to nudge anymore. You’re going to have to fight more just to meet that same deadline for making the playoffs.”

Brett Moffitt recovered from a spin to finish ninth while Jeremy Clements continued his strong start to 2021 with a 10th-place showing. JJ Yeley was one of the best stories throughout the day, finding himself in the top 10 a few times before settling for 13th. The 44-year-old continues to get the best out of underfunded equipment. Timmy Hill earned his first top 15 of the Xfinity Series season in 14th. Following a 13th-place showing in his second career start, Santino Ferrucci earned another solid performance, bringing home his No. 26 Sam Hunt Racing machine in 15th.

All three series are on tap to return to the track at Atlanta Motor Speedway. The Camping World Truck Series comes off of its second off-week for a trip to Hampton, Georgia. The old, worn out surface provides an opportunity for some underdogs to rule the yard.

The NASCAR Xfinity Series heads to the high-banked oval for its sixth race of the season. Both Brown and Clements should continue their strong starts barring any issues. Colby Howard returns to the track where he finished 15th a year ago.

Finally, the NASCAR Cup Series heads to the mile-and-a-half for the Folds of Honor Quiktrip 500. While most of the series underdogs did not earn strong showings a year ago, the results should alter this week with drivers like McDowell, Jones, and Wallace holding the capability to produce results.

Best run of the year so far…

Held steady in the top 10 for awhile in stage 3.

Much to build off of going into next week. pic.twitter.com/lylNrEzkcA

Still got some work to do. Had a good day on pit road but fought a loose car all day. Finished P20. @TeamChevy pic.twitter.com/WUZ3jl5nXv

With last night’s 3rd place finish at @phoenixraceway, @brandonbrown_68 picks up a new career and team-best finish in the @NASCAR_Xfinity Series! pic.twitter.com/Lbk9dKBqo5

The #74 @LernerandRowe Camaro team showed speed and battled all day long for a successful 7th place finish. Thanks to all our partners for your support! -PR@mhrracing @phoenixraceway #Call811beforeyoudig200#JMSteel@BelmontCars@FortWorthScreen pic.twitter.com/6y9zFl9H5J

It’s started here⬇️⬇️ and finished p13 … Lots of commotion on the last restart and got shuffled back. I hate it for @DiamondbackLS @RickWareRacing @SSGLR0717 Guys worked hard and deserved a better finish . pic.twitter.com/n2SQvNapEA

I thought with the Hamlin-Jordan ride this was the year Bubba was supposed to be in top equipment and he would lose the excuse of blaming his car and team for mediocre finishes, but he he still counts as an underdog? Or is he a permanent underdog for simply being less talented than the guys who actually win races?

At the beginning of the year Bubba was listed with the big boys as a contender. He is in the group photo of NA$CAR’s brand picture. Now you have him as an Underdog!
Nobody like to have a driver hyped in their face (Danica/Bubba) every week without descent results. Nothing wrong with rooting for the underdog though, just don’t cram them down our throats.

Yep, “crammed down our throats” is exactly right and that was my main problem with both Danica and Bubba. Both the media and NASCAR treat them like they were stars without them ever putting up stats to warrant such treatment.
Similarly, I am getting tired of the catch phrase “best season ever”. That is for fans to be the judge of, not NASCAR and the media and, realistically, no one will be able to make that appraisal until very late in the season.
Just because NASCAR and/or the media says it’s so, doesn’t make it so. The days of “people will believe whatever we tell them to believe” are over.

The only way Bubba finishes better than his usual 23-26 is dumb luck. Like at Phoenix. He restarted in the lead (dumb luck) and was back around 16 when he lucked out with another caution.

A guy driving in JGR equipment and millions in sponsorship dollars is far from being an underdog to me.

Why does the racing media keep Wallace in the news. He is a nobody ..never won a race..his claim to fame is ruining racing for thousands of southern auto race fans and many in the rest of the country. When he starts to contribute to the sport by winning maybe then you should mention him .