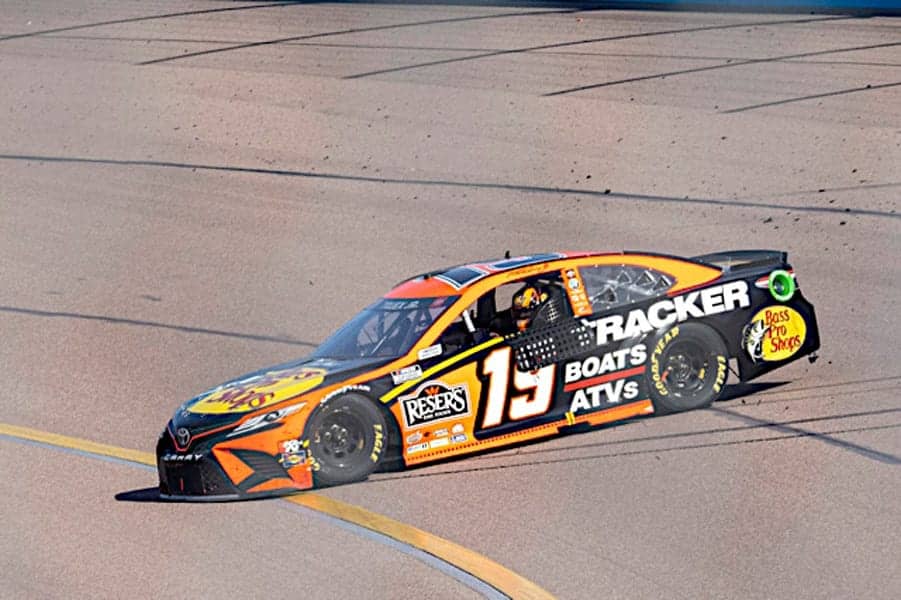 A grand total of 30 races separated Sunday’s Instacart 500 (March 14) from the last time Martin Truex Jr. scored a NASCAR Cup Series victory. That came under the lights at Martinsville Speedway last year. Truex was nowhere to be found in the top 10 when the first stage was over at Phoenix Raceway, but popped up in second at the end of stage two. He then traded the lead with Joey Logano before eventually getting past the No. 22, setting sail and never looking back.

Kyle Larson, off his win last week at Las Vegas, ended up seventh despite getting close to chasing down Logano. Larson got up to second before a round of pit stops and a penalty foiled those plans. Despite cutting back through the field, Larson’s run fizzled out and he ended up seventh.

Other solid runs came from drivers like Bubba Wallace, who sliced through the field all the way up to seventh. His team made the decision to stay out on a round of yellow-flag pit stops, but the No. 23 only fell back through the field and never fully recovered. Chase Briscoe and Ricky Stenhouse Jr. also made appearances inside the top 15, but had very different outcomes: Briscoe ended up 22nd, Stenhouse 12th.

On the flip side of positive runs, Kyle Busch‘s day turned into a nightmare. Sporting Stanley Tools colors for the first time, the No. 18 had an overall subpar run made worse by smacking the wall mid-race and later getting turned by Ross Chastain.

Busch won the season-opening Clash, but his first points-paying top 10 didn’t come until Homestead-Miami Speedway. He added a third-place effort last week in Sin City, but Phoenix was a huge step back for the No. 18 team.

Just like last week (and the one before that), Hendrick Motorsports continues to post strong showings. The team has had at least one car finish in the top 10 in every race this year and two cars finish there in all but one. The stable still has two wins across five races.

Three HMS pilots finished inside the top 10 at Phoenix, and even Alex Bowman had a strong showing despite finishing 13th. Bowman was wrecked early during an accordion-style stack-up but made his way back for a top-15 finish. Indeed, Larson was the only Hendrick car to lead a lap, but everyone looked fast and Byron had a quiet top-10 run. Larson had the aforementioned speed, where he nearly took the lead before his race was upended by a second pit road penalty.

That said, Larson did come off pit road in front of Logano and gapped the No. 22 by quite a ways before restarts allowed him to more easily clamber back into the top 10. Hendrick will be incredibly fast this year and don’t be surprised if each driver ends up with multiple wins.

Where…did the other key players wind up?

Polesitter Brad Keselowski led intermittently for a few laps here and there. It wasn’t a great day for the No. 2 team, but he led 19 laps and came home with a top-five finish. He was in the top five by the time both stages ended (and the race), but despite never being a huge factor it was a solid day for the No. 2.

Chase Elliott, the defending winner at the track after securing the 2020 championship there mere months ago, also had a quiet day. His late-race battle with Hendrick teammate Larson was the most the No. 9 was on TV all afternoon, but Elliott got past Larson and held on for a top-five finish. It was a much-needed boost for Elliott after he spun last week at Las Vegas.

Kevin Harvick, usually one of the drivers to pick in any given Phoenix race, was another driver with a quiet performance in the desert. He scored stage points in both segments but was never really a factor. It ended up being a good points day for the No. 4 team, though, as they finished sixth.

A restart with 25 laps to go marked the final turning point of the race, where Truex snatched the lead from Logano and put his No. 19 on cruise control. Logano cut the lead down slightly, possibly as a product of Truex backing off a bit, but the margin remained at over a second the rest of the way.

Perhaps an earlier restart was a precursor to that: Truex’s Toyota nudged Logano as the green flag flew mid-race, nearly sending the No. 22 spinning into the inside wall. Either way, it really did take a while for the No. 19 and Truex to find their happy medium, but when they did, they ended up in victory lane.

The Cup Series heads all the way east and returns from its West Coast swing, landing at Atlanta Motor Speedway for the track’s first event since the middle of 2020.

Harvick won there in the premier division’s lone visit to the Georgia speedway last year, leading 151 laps and beating Kyle Busch by 3.5 seconds. He’s won there three times in his career and has 15 top-10 finishes in 30 starts; and, as some bad news for his competitors, he’s led at least 100 laps in seven of the past nine races there.

That No. 4 team could very well get its 2021 season back on track in the Peach State.

How… important is this victory for Truex?

Could this be the race where Truex finally, fully clicked with James Small?

While Truex did score 23 top-10 finishes in 2020, just one win was a part of that stat. That lone victory was certainly a departure from the previous three seasons boasting a total of 19 wins, and Truex fell out of the playoffs sooner than expected.

Truex had never won at Phoenix before Sunday, so that’s the first good sign. Secondly, he’s reeled off three straight top-six finishes once the Cup Series departed Daytona’s sunny shores. It was also a big day for him after the race, when it was officially announced that Truex will drive in the Camping World Truck Series – for the first time since 2006 – in a Kyle Busch Motorsports truck. This win was surely a boost of confidence, despite that truck event being in a different series, different vehicle and on a different surface.

He also finished third at Atlanta last year, so he’s definitely a driver to keep an eye on next week. Don’t be surprised if that Toyota is there at the end in Georgia.

hopefully old mother nature won’t be the winner at ams. we’ve got a week of rain coming here in ga.

i think larson just needs to get re-acclimated to the pit road stuff, and he’ll be fine.