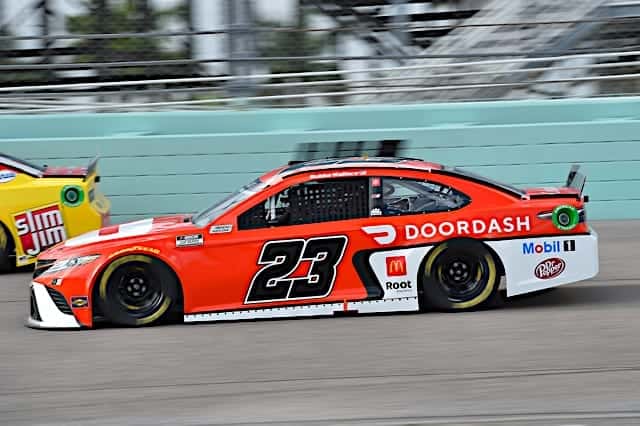 The second test for NASCAR’s new Next Gen car at Richmond Raceway is set to take place on March 16 and 17, and 23X1 Racing driver Bubba Wallace will get his first taste in the new car as the driver, NASCAR announced March 15.

It will be the second time that the Next Gen has appeared on the .75 mile short track. Richard Childress Racing’s Austin Dillon tested the car in October 2020.

The last time the Next Gen car was on track was at Charlotte Motor Speedway with Chip Ganassi Racing’s Kurt Busch in January.

Wallace will be the third driver from Toyota to test the new car, which is slated to debut in 2022. Erik Jones tested the car at Homestead-Miami Speedway in January 2020 while he was still at Joe Gibbs Racing, and Martin Truex Jr. tested the car alongside Busch on both of Charlotte Motor Speedway’s layouts.

i spewed water when i read this headline.

Michael must have paid a lot for this.

So which driver would you have them use as a test driver? Obviously Bubba isn’t up to the required standard. Just asking for a friend.

Actually, I have more of a problem with them only taking one driver/team at a time. You’d think there would be more to gain if they took a few each time.

Oh maybe one who has won a cup or xfinity race, at least one would be nice. Or probably a driver who has at least finished the season in the top twenty drivers a time or two. Not sure I would pick a driver who nobody has a clue if they can provide the information Nascar is looking for. Someone along the lines of a Kurt Busch Busch would work just fine. Offhand I can think of many that would fit my thinking.

Bell who runs up front and has nothing to prove. He learned in. Sprinters and Midgets. Pavement or dirt experience with excellent power to weight ratio.

Bell who runs up front and has nothing to prove. He learned in. Sprinters and Midgets. Pavement or dirt experience with excellent power to weight ratio

I thought we might have a week of no weekly Bubble press releases . But they are batting away. What did this guy do to get a first class car and team ? And his racing history is ? Is he part of the BLM movement ?

Last week they had 3 Cup Champions (Truex, Logano and Elliott) testing the new car. I guess they just wanted to balance the field with a bottom feeder.

I find the responses to my question of who else should test the car instead of Bubba interesting. I would have thought someone would have said it didn’t matter. That testing is just to collect data, as much as possible. So one more set of inputs wouldn’t effect anything.
Maybe all the people who felt that way just kept quiet.
Or, maybe nothing changed when Danica left.

Tom B
Reply to  David Edwards

Poor Danica, just when she thought she was free of the ridicule from NA$CAR fans, they bring her back in. This time for the marginal skills of another NA$CAR Diversity and Inclusion Program Driver. Birds of a Feather.