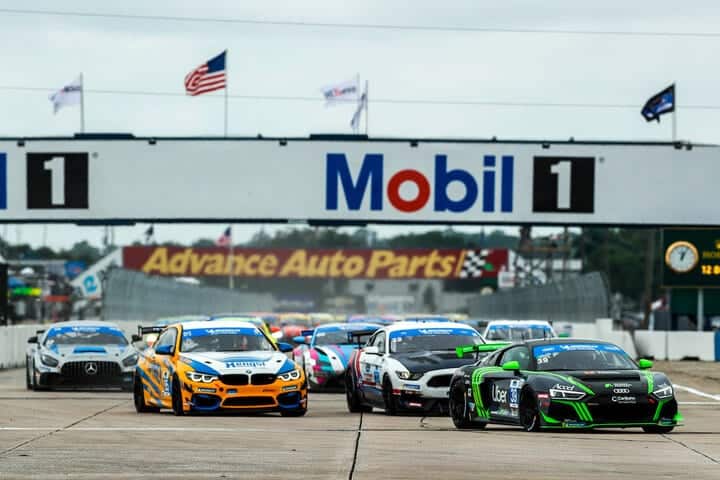 Friday (March 19) will see IMSA Michelin Pilot Challenge teams compete in the Alan Jay Automotive Network 120 at Sebring International Raceway.  The first sprint race of the season will have 35 teams entered, a drop of seven from Daytona.

In the Grand Sport class, there are 20 teams entered, down from 25 in Daytona.  The five that aren’t entered are BGB Motorsports, BimmerWorld Racing, KohR Motorsports, FraSun Racing and Notlad Racing by RS1.  BGB Motorsports previously announced that they were retiring their Cayman to focus on the new Porsche Carrera Cup North America, which debuts this weekend.  BimmerWorld Racing appears to be focusing more on Pirelli GT4 America SprintX as they are fielding three cars there.  Notlad Racing by RS1 is also primarily an SRO America team.  FraSun Racing is a part-time operation.

The only true surprise of the bunch is KohR Motorsports, the defending Grand Sport champions.  The team is in a money crunch at the moment and wanted to race in Sebring.  Crashing out at Daytona didn’t help their cause.  Unfortunately, funding just didn’t materialize.

Of the 20 GS teams entered, there are no significant driver changes from Daytona.  A couple of the teams ran three drivers for the four-hour race.  With Friday’s event being a two-hour event, those teams are down to two drivers.

Daytona winners Orey Fidani and Kuno Wittmer are back with their McLaren 570S GT4, hoping to add a second overall victory to their totals.  Robby Foley won this race last year with Cameron Lawrence (pictured above in the No. 95 BMW), who is not entered.  Foley will look to back up his win in the No. 96 BMW.

Ryan Hardwick was originally entered to return to Wright Motorsports’ Porsche Cayman GT4 MR, but has since been ruled out.  The team has brought in Maxwell Root, who raced for the team last year in SRO America, to drive in Hardwick’s place.  It will be Root’s IMSA Michelin Pilot Challenge debut.

The 15 teams entered in TCR have minimal changes from Daytona.  Third drivers are generally not running, so JDC-Miller MotorSports won’t have Dr. William Tally in their Audi.  Caleb Bacon won’t be in the CB Autosport Hyundai, while Todd Lamb won’t be in the Atlanta Speedwerks No. 94 Honda.

The Alan Jay Automotive Network 120 is scheduled to go green at 2:35 p.m. Friday afternoon.  The race will be streamed live on NBC Sports’ TrackPass service.  The race is currently scheduled to air on NBCSN via tape delay April 2 at 1 p.m.