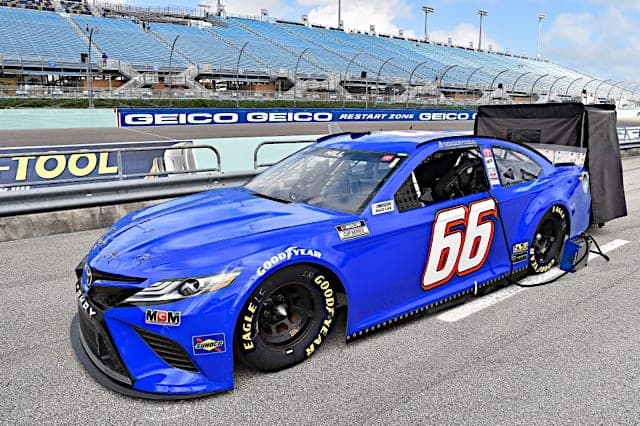 Add another dirt ringer to the Bristol Motor Speedway dirt course NASCAR race weekend. Mike Marlar will drive the No. 66 for MBM Motorsports as he attempts to make his NASCAR Cup Series debut, as announced in a Facebook post on Monday (March 15). He will also drive the No. 56 for Hill Motorsports, co-owned by MBM Motorsports driver Timmy Hill, in the NASCAR Camping World Truck Series race at the Bristol Motor Speedway dirt course.

“This is going to be interesting and I’m really looking forward to the challenge,” Marlar said in the announcement. “This is something that would not have been possible without the help of Carl Long and Rocky and Tom Smith from Smithbilt Homes. This is such a cool opportunity for me being a dirt racer from eastern Tennessee being able to compete in the top series of NASCAR at Bristol.”

“I am excited to have Mike in our car again, he is a champion dirt driver being paired with Clinton Cram, I will be one of many people excited to watch this duo go to work,” MBM Motorsports team owner Carl Long said in the statement. “We like being underrated and hope to surprise a lot of people. Added to the cup race normal driver Timmy Hill, aka truck team owner, with Mike Marlar and our guys helping Timmy out as usual in the pits, we will be sending our crew chief Patrick Magee to help out while Greg Ely is getting back healthy. This is going to be a fun weekend and debut our new sponsor”

The MBM Motorsports No. 66 car, normally driven by Hill, is 41st in the owner point standings.

Marlar debuted in the Truck Series in the most recent dirt race, the 2019 Eldora Dirt Derby at Eldora Speedway. He finished fourth after starting 23rd.

“This is a very unique opportunity to tie our truck program with Hill Motorsports along with MBM Motorsports with the Xfinity and Cup programs together,” Timmy Hill added. “I am looking forward to our first event with LiftKits4less.com with Mike Marlar in our No.56 truck at Bristol! Mike has impressed me in so many ways and I am looking forward to seeing him tackle this new race track!”

Here is the truck Mike Marlar will run at Bristol and Timmy at Darlington.. we are proud to partner with…

The Hill Motorsports No. 56 truck is 32nd in the owner point standings.