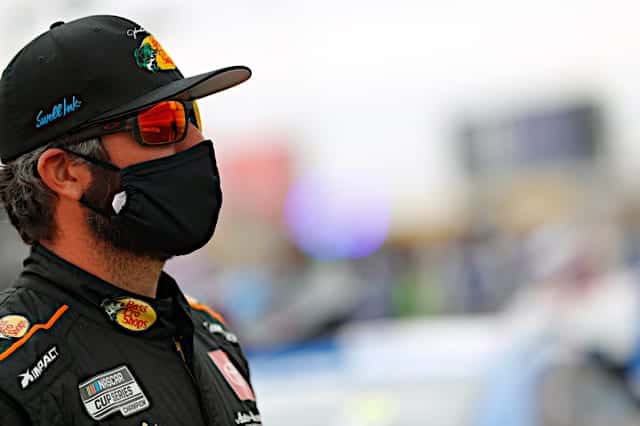 Fans who have been around for more than a decade can likely recall a time when Martin Truex Jr. victories came about as often as February 29 does. Now it’s nearly as surprising when he goes almost a year without a win. Fortunately for his Joe Gibbs Racing team, that clock was reset on Sunday at Phoenix. Here’s a sampling of some notable numbers that are worth a closer look.

Truex has just two wins since the beginning of last year. Peculiar considering that he amassed 23 during the previous four seasons of competition. It certainly isn’t because he doesn’t run well. Truex finished in the top five 14 times last year, but 13 of those were in positions two through five. It’s also not as if he was never out front as the No. 19 led 950 laps. The last driver to lead that many laps in a season while picking up a single win was Kyle Busch back in 2012. Something tells me, though, that Truex may not have just one win this year for too long.

Of the 1,116 laps run so far in the 2021 Cup Series season, Team Penske drivers have led 329 of them. That’s nearly 30% and yet none of the drivers have been able to deliver a win through the first five races. Things did take a bit of an upswing at Phoenix with Ryan Blaney winning a stage for the first time this year. Blaney got off to a rocky start but has put together a couple good weeks of late.

Joey Logano was the dominant force in the desert, but while he led 149 laps, none of them were the one that counted the most. The No. 22 is the only one to lead every race this year after Chase Elliott failed to reach the front of the Phoenix outing. Logano has arguably been the best Ford driver in the first five races, and I’d expect him to be able to hold his steering wheel aloft during a confetti shower soon.

Truex will make his first Xfinity Series start in over 10 years this weekend at Atlanta Motor Speedway in the No. 54 Toyota. The series champion in 2004 and 2005 hasn’t raced in the lower level division since the finale at Homestead Miami Speedway in November 2010, when he finished 12th in a Michael Waltrip Racing ride.

The No. 54 car is a development ride for JGR and until this week, could be referred to as the Ty ride considering that’s the first name of both occupants before Truex. Ty Gibbs has a win and another top 10 in his two starts. Ty Dillon has a 14th sandwiched between two 30-somethings in three tries. Having a veteran like Truex in the car may help shed some light on the disparity between the other two drivers.

Parity has continued to be the name of the game for the Cup Series and the faces that show up in victory lane. In the past 14 races, dating back to the event at Richmond in September, only one driver has won more than once. Defending champion Elliott won three times late last year, but outside of that, it’s been a lot of “take one and pass it down” in the trophy line.

The Truck Series returns to action at Atlanta, where there has been a bit of parity in another sense. The last nine truck events at Atlanta have been won by nine different drivers. Defending winner Grant Enfinger will look to join Kyle Busch as the only drivers to win the event in consecutive years.

The Xfinity Series race at Atlanta has been essentially owned by Cup Series regulars. When AJ Allmendinger won last year, it was just the second time since 1996 that the Atlanta race winner was not running a full time Cup schedule that year. The lone other such occurrence in that span was Ricky Stenhouse Jr. in 2012.

The good news for participants this year is that there aren’t as many Cup drivers dabbling in the kiddie pool these days. The bad news? The previously mentioned occupant of the No. 54 at AMS could add another year to that streak.