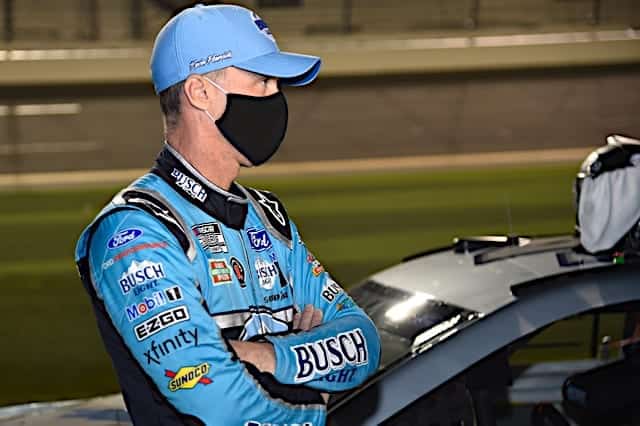 Sunday’s (March 14) NASCAR Cup Series race was a fairly typical event at Phoenix Raceway.  Perhaps the most surprising aspect of the Instacart 500 was how little the FOX broadcast team called Kevin Harvick’s name.  It wasn’t long ago that Harvick completely dominated the desert mile.  Prior to Sunday, Harvick compiled nine wins, 18 top fives, and 25 top 10s in 36 starts at Phoenix.  Other than sharing the Cup Series starts record with Kurt Busch and Ryan Newman, nobody can match Harvick’s numbers in the Valley of the Sun.

Lately, however, Harvick has not been quite so unbeatable at Phoenix.  A year ago, he came up one spot short of claiming his 10th Phoenix victory, but led 67 laps.  And last autumn, in the final race of the season, Harvick quietly finished seventh.  Sunday’s performance was more like the 2020 finale than any of Harvick’s previous Phoenix triumphs.  He finished a respectable sixth, extending a streak of consecutive top 10s at Phoenix to 16 races.  But Harvick never led a lap all afternoon.  He ran a good race, but he was never a threat to drivers like Joey Logano or eventual winner Martin Truex Jr.

Much more impressive than Harvick’s recent record at Phoenix is everything he has accomplished within the last year.  After NASCAR returned to action in May 2020 following a two month break due to COVID-19, Harvick established himself as the man to beat for the championship.  The No. 4 team cruised through the summer with ease, winning seven races and easily clinching the regular season championship.  Then Harvick rolled right through the first round of the playoffs, winning high-profile events like the Southern 500 and the Bristol Night Race.  Harvick has enjoyed an excellent run of success with Stewart-Haas Racing, but he and the No. 4 team rarely looked better than they did in 2020.

Yet almost immediately after the Bristol victory, Harvick and SHR cooled off.  The downturn came at the worst possible time.  After letting a win slip away at Kansas Speedway, Harvick slapped the wall early in the next race, held at Texas Motor Speedway.  Despite beginning with a strong car, the No. 4 team couldn’t get the handling right during the rest of a long, rainy week in Fort Worth, leaving Harvick with a 16th place finish.  The next race at Martinsville Speedway, the final race of the round of eight, was a disaster.  Harvick never contended for the win, collected no stage points, and even spun out on the last lap in a desperate attempt to gain more points.  In the end, it wasn’t enough.  Harvick did not advance to the championship round of the playoffs.

The failure of the No. 4 team to win the championship was multi-faceted.  The playoff system, the intermediate track aero package, and the incident at Texas where Harvick likely hit the wall due to a wet racetrack, all contributed to him missing out on the championship race.  It is a shame that Harvick’s nine wins in 2020 had less of an impact on his title hopes than two mid-pack finishes at the end of the year did.

However, that is not to suggest that Harvick was completely a victim of circumstance.  Everyone who participated in the postseason played by the same rules and ran the same races.  Harvick and his team knew from past experience that Martinsville could be a struggle for them, but they were unable to capitalize on the races that could have helped them advance.  In the six races that made up the playoff rounds of 12 and eight last season, Harvick earned only one top five and two top 10s.  Even with Harvick’s playoff points, that simply wasn’t good enough to avoid a bad situation.  It certainly was not the on the level of what Harvick did in the regular season, where he finished outside the top 10 only five times in 26 races.  While NASCAR’s playoff system remains critically flawed, it is not the only reason Harvick didn’t win the Cup Series title in 2020.

In any case, the No. 4 team figured to be strong again this season.  Harvick’s early results have shown promise.  He is currently seventh in overall points, and, along with Denny Hamlin and Kyle Larson, leads the Cup Series with four top 10s in five races.  The only real blemish on his record so far is Las Vegas, where Harvick was uncharacteristically slow.  But it still feels like Harvick is not back to his 2020 form.  Other than leading 17 laps in the Daytona 500, Harvick has spent no time at the front of the field.  Despite the good finishes, it is reasonable to suggest that the lack of race-winning speed which Harvick experienced at the end of last year is still an issue early in 2021.

The good news for Harvick is that Atlanta Motor Speedway is up next on the Cup Series circuit.  Atlanta is another venue where he has been dominant with SHR.  On the rough, worn out surface of the venerable Georgia speedway, Harvick has been frequently lauded for his ability to hold an efficient line and maintain speed through the track’s slippery turns.  Having won two of the last three races at Atlanta, and having led at least 45 laps there in all seven starts with SHR, Harvick must be considered the favorite.  Certainly, next weekend will be a much better opportunity for the No. 4 team than either of the following two races.  Bristol Motor Speedway’s dirt race in two weeks will be a complete wild card before the Easter break.  Then it’s back to Martinsville, the track that killed Harvick’s title hopes last fall.

Next week’s race at Atlanta will be a good measuring stick for Harvick.  If the No. 4 team dominates and wins, then any concerns about its performance will look quite foolish by this time next week.  But if Harvick doesn’t have the speed to race for the win at Atlanta, of all places, he might have a tougher road back to victory lane than most would have predicted.

i wonder how much of stewart’s other ventures are affecting the teams.

they just seem a bit disjoined this year. no real leader.

The season goes fast. Before you know it the All Star Race is here and no top five results. Probably will make the Playoffs on points.