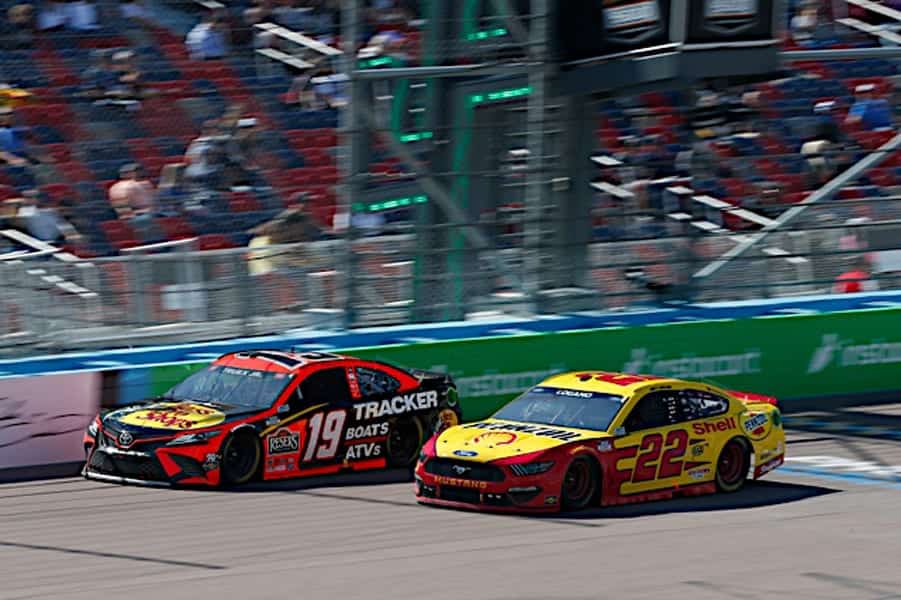 And while the performance felt like a statement win for Truex, who snapped a 29-race winless streak by leading 64 laps en route to victory lane, it also proved to be a strong day for Joe Gibbs Racing as a whole.

The organization placed three cars in the top 10 Sunday as Denny Hamlin wheeled his way to a third-place finish and Christopher Bell finished ninth. Two-time Cup champion Kyle Busch struggled, getting spun by Ross Chastain with roughly 30 laps remaining and scraping the wall another time before eventually finishing 25th.

JGR’s overall success at Phoenix felt notable for a few reasons, even if it wasn’t the program’s first win of the year. That came at the Daytona International Speedway road course when Bell, a Cup Series sophomore, earned his first checkered flag. At one point in that event, all four JGR cars were running in the top seven positions, surely a sign that they all had competitive and winning speed, but only Bell and Hamlin finished top 10 (first and third respectively) that day.

While Busch dealt with his share of issues at Phoenix, the rest of the organization put that speed into a complete race that seems to bode well for Joe Gibbs Racing’s near future at the 1-mile tri-oval, where a champion will be crowned on Nov. 7.

“November is a long ways off, but I’ll tell you for me personally and I think for our team that this helps a lot confidence-wise,” Truex said. “I think if we would’ve came here last year in the final four as I mentioned earlier, we would have been pretty nervous and not very optimistic because as [crew chief] James [Small] said, we sucked last year here.”

“Sucked,” of course, is a relative term. In March 2020, Truex was in the top 10 on a restart with 30 laps to go but crashed in turn 1 after contact from Aric Almirola, relegating the No. 19 team to a 32nd-place finish. In the November season finale, Truex ran 10th and was a non-factor for the win.

To run well this time around – both for himself and the team overall – is a shot in the arm he says the team can use for motivation moving forward.

“Confidence is a big deal, but usually you’re confident because you’ve had past success and you can build on those things that you understand,” Truex, the 2017 series champion, said. “[You understand] the racetrack, you understand how to make the car do certain things. I think from that standpoint, this is a big boost for us today to knock this one out today.”

The lurch forward is also significant not just for JGR at Phoenix but at short tracks across the board. Tracks that rely upon the 750-horsepower package, including short tracks and road courses, plagued the Gibbs organization for much of 2020 despite a spring Martinsville Speedway win for Truex, his last prior to Sunday.

It was an obvious step in the right direction, and perhaps one that should be noted for future reference. Yes, this is only the fifth race of the season and just the second in which the 750-hp package was utilized. So while we can’t definitively say that Gibbs going 2-0 in 750-hp contests is the true sign of a trend, it certainly isn’t a bad start, right?

Hamlin, the series’ current points leader despite a zero in the win column, surely sees it as a positive, noting how strong Truex and his team typically run at the tracks shorter than 1 mile in length.

“Last year, if we could run sixth or seventh, it was probably a decent day for us. Hopefully, this is a sign that we kind of worked on the right things and are heading in the right direction.”

Truex said the team knew something needed to be done, so much of JGR’s offseason effort was placed on short tracks. But questions remained entering Sunday’s contest, the first that would truly test whether they improved between November and March.

“Coming here, I don’t know that we were real sure exactly how it was going to look. Who is going to be strong? Are we going to be strong?” Truex said. “I think to answer some of those questions is good, and to have a good, strong base is good, something we can build on. A lot more short tracks coming up this year and a lot of races with this particular package this year, including road courses. It’s an important one. It’s good to have a good day starting the first one off.”

Phoenix marks the first event at a shorter track on the Cup schedule, and there will likely be plenty of other performances by other teams that will elicit similar reactions. Team Penske, for example, proved it will be a force to be reckoned with as the season moves on.

But let Sunday’s race at Phoenix serve as the precursor of what could be a very strong season for the four-car brigade at Joe Gibbs Racing.