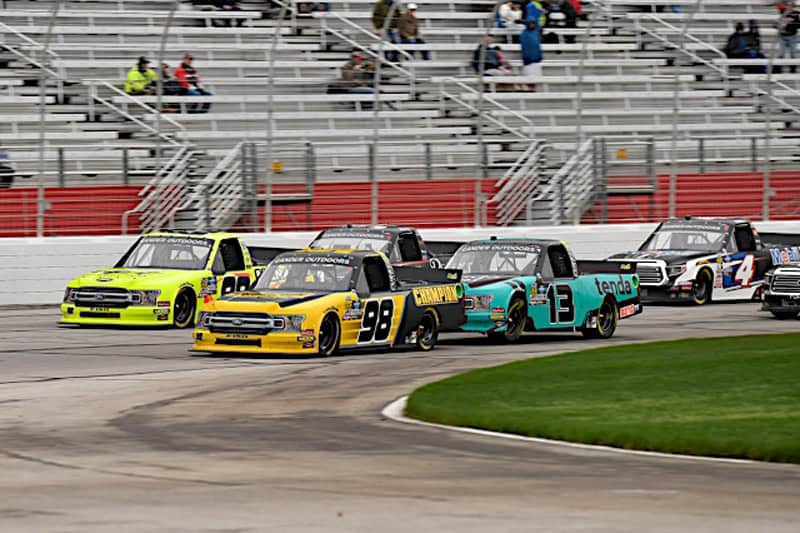 After a week off, the NASCAR Camping World Truck Series returns to the track at Atlanta Motor Speedway, with 42 trucks currently entered.

With a surplus of entries, two teams have been excluded from racing, barring any entry list changes.

Trey Hutchens in the No. 14 and Ray Ciccarelli in the No. 49 are the two trucks that will not race this weekend. However, the No. 56 of Hill Motorsports, which was expected to run the full season (and with Timmy Hill expected for Atlanta), is not currently entered; if their absence was a clerical error, it’s possible a third team may join the Nos. 14 and 49.

Jordan Anderson returns to his self-owned No. 3 for a third Truck start in 2021.

After giving the CR7 Motorsports seat to Grant Enfinger at Las Vegas Motor Speedway, Codie Rohrbaugh returns to the No. 9.

Spencer Davis is currently slotted into his first Truck start of 2021 in the No. 11 after failing to qualify at Daytona International Speedway.

After well over a decade away, Bill Lester returns to the series in David Gilliland Racing’s No. 17.

Bret Holmes‘ No. 32 comes to Atlanta for its second series start; Atlanta was originally expected to be Holmes’ debut before the team opted to run at Las Vegas.

Reaume Brothers Racing’s Nos. 33 and 34 will be driven by two drivers making their 2021 series debuts but are no strangers to RBR trucks, as Akinori Ogata and Ryan Ellis will race the entries.

Ross Chastain makes his season debut in the Truck Series, returning to his old team, Niece Motorsports, in its No. 44.

Kyle Busch is in his own No. 51 for the second straight race.

Henderson Motorsports’ No. 75 boasts Parker Kligerman in its seat for his second race in a row.

Enfinger slides back into ThorSport Racing’s No. 98 after Christian Eckes drove it the last two events.