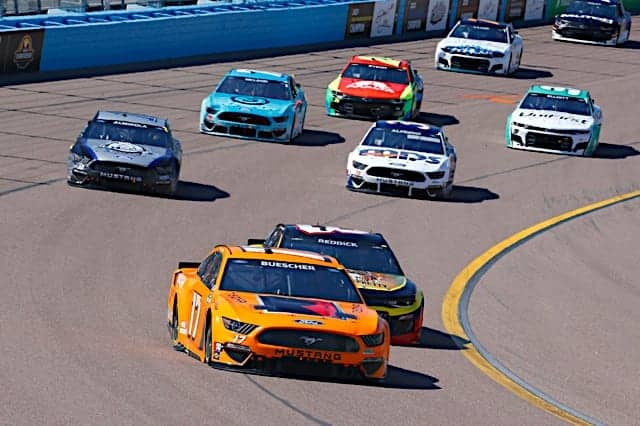 With LeBron James buying into the Boston Red Sox (and Fenway Sports Group), could we see him become involved with Roush Fenway Racing at all? – Anita P., Loudon, NH

Let’s get this out of the way first: in no way do I think LeBron James bought into the Red Sox so he could have a stake in Roush Fenway Racing or NASCAR. Sure, he knows about NASCAR, and I’m sure it’s not lost on him that Michael Jordan has made an entrance into team ownership this season.

Sickening! @BubbaWallace my brother! Know you don’t stand alone! I’m right here with you as well as every other athlete. I just want to continue to say how proud I am of you for continuing to take a stand for change here in America and sports! @NASCAR I salute you as well! ??✊?? https://t.co/1TwkjVHai5

But conventional wisdom suggests that this was an “added bonus” for James upon buying into the Red Sox. He also previously had an ownership stake in English Premier League club Liverpool (also owned by Fenway Sports Group) and is no stranger to diversifying his portfolio when it comes to business ventures.

This seems to just be the latest in what have been multiple steps for the basketball legend to expand his reach beyond the court. But now that he is technically an owner…

Picture this: MJ and LeBron on the grid at the Daytona 500. How freakin’ cool would that be?

I’m all for NASCAR going mainstream (again) and the crossover into other sports (as we’ve seen with Alvin Kamara and Antonio Williams Jr. this year, along with Jordan, Brad Daugherty, etc.). Who knows, could this be the start of other high profile athletes/celebrities investing in NASCAR?

It’s no secret that the sanctioning body’s stances taken throughout the 2020 season made bigger names in sports take notice and act on it. From something as small as sending a tweet, showing support, showing up to races, participating in iRacing events or, heck, footing the bill for a new team, the ball is now rolling.

The facts are as follows: by the letter of the law, Michael Jordan and LeBron James are ~technically~ owners in NASCAR. I don’t care who you are (or who you think the G.O.A.T. is), that’s pretty damn cool.

What’s up with Stewart-Haas Racing as a whole? Kevin Harvick keeps clicking off top-10 finishes but isn’t running as well as we’re accustomed to seeing him run. And the rest of the organization is lacking. Should there be worry in that camp? – Alexa M., Stateville, NC

To put it simply, Alexa: yes, Stewart-Haas should be worried.

I wouldn’t go so far to push the panic button yet, but Rodney Childers may have said it best.

On tonight's #LateShift with @BradGillie & @KellyCrandall, Brad asked @KevinHarvick's crew chief @RodneyChilders4 what the difference has been in the team this year, and what's going on with the team from his seat. @FordPerformance | @StewartHaasRcng pic.twitter.com/CtPzQbGegf

Seventy pounds of downforce is significant, as Childers pointed out. That’s what they lost in the offseason due to a small rule change. Four top-10 finishes and one 20th-place run for Harvick is fine, but the race-winning speed hasn’t been there yet. Going to Atlanta Motor Speedway this weekend, we’ll see if it shows up.

But growing pains are also plaguing the organization as a whole this season. Despite winning nine races last season in the NASCAR Xfinity Series, Chase Briscoe is a rookie and looks every bit of it. Cole Custer‘s win last season (while not a fluke) may not repeat itself this year, and Aric Almirola dug himself a deep hole only a few races into the season.

.@Aric_Almirola says in the current landscape, a bad race now carries over to the next, which hasn't been the case before in #NASCAR.

"You have a bad starting position, a worse pit selection […] it's a challenge. It definitely makes the momentum harder to swing & turn around." pic.twitter.com/wHCABjRNTV

NASCAR seems to move in cycles. Remember when Hendrick Motorsports couldn’t seem to get out of their own way? Look at them now. Remember the first half of a couple seasons ago and Joe Gibbs Racing wasn’t winning races and Denny Hamlin was “on the hot seat?” Look at them now.

Stewart-Haas Racing won 10 times last year and looked every bit as strong as Hendrick looks right now. But as the years go on, so do the rules, regulations and engineering. SHR hasn’t kept up to their own liking (as Childers admitted), and it very well could swing the other way by the time the playoffs roll around.

It’s a cause for concern for sure, but no need to panic yet. But if in a handful more races, Harvick is still winless, Briscoe has shown little to no improvement, Almirola is still in a points hole and Custer isn’t progressing, then it may be time to look a little deeper into the problems at SHR.

I thought FIRST was Brad Daugherty when it came to NBA stars in NA$CAR.