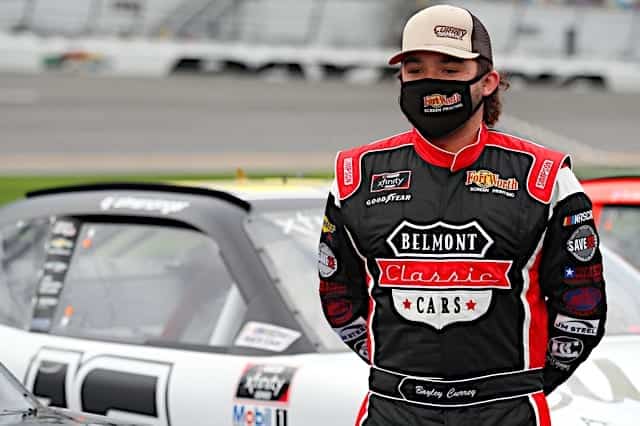 Amidst the utter chaos that occurred on the final restart of last Sunday’s (March 14) NASCAR Xfinity Series event at Phoenix Raceway, you might have noticed a bright yellow No. 74 sneaking through the mayhem.

That was the Mike Harmon Racing Chevrolet of Bayley Currey, who scored a career-best finish of seventh as competitors made contact all around him.

Currey is a five-year veteran of NASCAR’s top-three divisions, currently on track to make the 100th start of his career at his home venue during the June Xfinity race at Texas Motor Speedway. His previous best result, coincidentally, was a 12th-place effort that came in his native Lone Star State in October 2020.

That was his first season competing in multiple races for owner Harmon. This year, the 24-year-old’s 2021 campaign is already riding a high note after Phoenix.

“It was definitely motivation,” he told Frontstretch. “I feel like it kind of shows what we can do if we do our job right, we do everything right in the shop and we do everything right on the racetrack. I think we could duplicate that, think we could do it again. That’s just motivation going forward. We’ve had a bad few weeks or first few weeks, so being able to get out of that hole and go get a good run [is] some more motivation.”

Currey was having a solid day in the desert prior to that restart, running in the top 20 for much of the race’s latter half after starting 29th.

“[We were] just kind of methodically working our way up there,” he said. “… I think we had a good car in the beginning. It was pretty hard to pass with the PJ1 up there; it was laid on pretty thick the day before, or actually even earlier in that day, so it made it really dominant. But we were able to work on the car, get it a little bit better [and] we were able to slowly get some track position through restarts and things like that.

“… I think we were running about 12th or 13th on that last long green-flag run and we were actually running down 12th, 11th and 10th, but that caution came out. And I knew that I wanted to go to the bottom, because it kind of gives you that opportunity to shoot across the apron, and it worked out.”

The #74 @LernerandRowe Camaro team showed speed and battled all day long for a successful 7th place finish. Thanks to all our partners for your support! -PR@mhrracing @phoenixraceway #Call811beforeyoudig200#JMSteel@BelmontCars@FortWorthScreen pic.twitter.com/6y9zFl9H5J

With 55 total starts under his belt across four years of Xfinity competition and 91 NASCAR appearances in all, Currey has learned a lot about racing in the sport’s highest echelon.

“I really just learned how to be more aggressive and when to be aggressive,” he said. “Obviously, when you very first come in, you’re racing at these bigger racetracks. It’s harder to go out there and do everything you did on a short track because everything’s moving so much faster: it’s a lot more room, you’re going fast, you gotta pay attention to the air, things like that. But I’ve definitely learned how to manipulate that stuff a little bit, definitely willing to be more aggressive and I feel like the way the restarts are nowadays, how you got to get it all on restarts like that, and how important track position is, I think it’s helped quite a bit.

“… [My] takeaways were just learning from every experience, every lap you take out there and trying to learn something from the faster guy around you,” he added. Try to follow him, see what he does – and just trying to soak everything up like a sponge, man. Learn everything you can and ways to get better.”

His father, Mark, also raced, so Currey was exposed to the world of motorsports at a young age.

“… Naturally, I wanted to be in the same thing and started out like anybody else, any of these other guys out there,” he said. “[I] started in go-karts, did that for a year or two, and just worked my way up: bandoleros, legends cars, traveled a lot doing that stuff all over the country. It kind of started to get expensive, so [I] came back home, did some local modified stuff, late model stuff.

“[I] started traveling again, going down to Pensacola [,Florida], Alabama … doing that kind of deal,” he added. “… I knew a guy who was kind of working in the NASCAR industry that I worked with in my legends car days. He gave me a call, told me to come up there and try to do something. He knew the crew chief at Rick Ware Racing at the time … those guys helped [me] out trying to get to know the whole deal, and Rick helped me get my first opportunity in a truck. And [I] ran a couple races there at the end of 2017 and then the ball [was] just kind of rolling from there.”

One of those three Truck races at the end of 2017 was also at Phoenix, where Currey recorded his first top 10 in just his second start with a 10th-place finish.

“Been running for a lot of smaller teams,” Currey said. “Ran for B.J. [McLeod], Copp, JP Motorsports, running for Mike Harmon now and Rick Ware Racing in the Cup Series. I’ve gotten a few opportunities at Niece Motorsports … but just been doing all that, ran some Cup races in 2019, ran a bunch of Xfinity in 2019 and 2020 and it’s kind of led me to get my full-time deal over here with Mike this year.”

Currey is also a mechanic who works on the MHR cars he drives.

“I think it definitely helped me as a driver, being able to work on them,” he said. “I’ve worked on my own stuff since I was 10 years old, working on old bandoleros … so it’s kind just normal for me, it’s what I’ve always done. I think it helps a little bit, it helps give me some confidence when I go in the corner [on the] first lap, especially out here with no practice.

“… If something’s gonna feel weird, I usually know what it is … but I think it helps with my feedback as well, knowing what’s in the car, knowing what I think I might want to adjust during the race.”

Currey will run the full 2021 schedule for MHR, returning east this week with the rest of the Xfinity Series field to Atlanta Motor Speedway. Currey finished 18th at the 1.5-mile oval last year, at the time tying a career-best finish, and will hit the track with a new high mark in his rear-view mirror.

“I’m excited just to build on what we had there at Phoenix,” Currey said. “We were really strong at Atlanta last year, I felt like, and I think we are better as a team since then. So I’m excited to go out there and try to do better than last year, I think there’s a few places coming up that I think we have a chance to run pretty good at between Atlanta, Martinsville [and] we got the road course stretch there coming up. [I] feel like we’re pretty solid on road courses, so I’m just excited to keep this momentum going and try to duplicate more finishes like that.”

The Xfinity Series is set to take the green flag shortly after 5 p.m. ET on Saturday, March 20 for the EchoPark 250 at Atlanta.