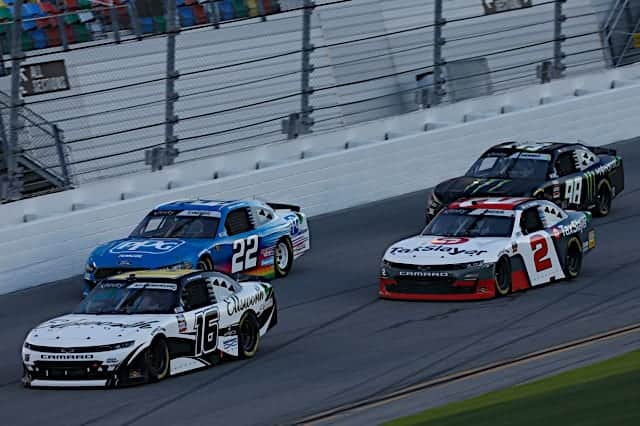 Austin Cindric is the defending NASCAR Xfinity Series champion. So far in 2021, Cindric is showing that he is again a force to be reckoned with in the series. He took the checkered flag in the season-opening race at Daytona International Speedway and won last weekend’s (March 13) race at Phoenix Raceway.

He has also finished in the top five in all five Xfinity Series races this season and leads the point standings. While it is early, Cindric is showing everyone that his 2020 season was no fluke.

However, the season is still young and several other drivers have shown promise early in this season. Former Cup Series veteran AJ Allmendinger has come out and made a statement by winning at Las Vegas Motor Speedway and showing speed early this season. His Kaulig Racing teammate, Jeb Burton, has shown consistency that has impressed many. He has finished in the top 10 in all five races and sits third in points.

Joe Gibbs Racing has an impressive resume in the Xfinity Series and Daniel Hemric sits second in the standings, ready to strike when the opportunity permits itself. Richard Childress Racing’s Myatt Snider has already locked himself into the playoffs with his win at Homestead-Miami Speedway and is with a team that won the title in 2019.

With the amount of road course races in the series this year and the unpredictability that comes with those, it’s still anyone’s game as far as the championship is concerned. So that led us to ask: Is Austin Cindric the favorite to win the Xfinity Series title? Our writers Luken Glover and Joy Tomlinson debate.

Coming off of a season in which he won six races, including three in a row, Cindric is absolutely the favorite to win the Xfinity championship this season. He is slated to drive the No. 21 Wood Brothers Racing next season barring any movement at Team Penske, which has him even more motivated to prove his worth.

With Chase Briscoe graduating to the Cup level, that adds even more of an opportunity for Cindric. Remember when Christopher Bell, Tyler Reddick and Cole Custer moved to Cup? That left the door wide open for Briscoe and Cindric to take advantage. Now, Briscoe is out and his replacement in Riley Herbst has been struggling to follow suit. That leaves the majority of the Ford focus on Cindric, who already has two wins in 2021.

One thing that has already stood out to me is that his resume has expanded to nearly every track type. In 2019, his pair of wins came at road courses, the main track type that his roots had been established on. Last season, he claimed wins at three 1.5-mile racetracks, two road courses, and one – the title race at Phoenix. This season, he immediately began his title defense by earning team owner Roger Penske his first Daytona win in the Xfinity Series.

Flash forward four weeks and he won his second straight race in Phoenix. If you look at the other three races, Cindric had a shot to win in each one. He won stage one at the Daytona International Speedway road course, and despite suffering serious damage in the process, finished second. At Homestead, he led 63 laps but was on the wrong end of tire strategy. And at Las Vegas, he won stage one again before a flat tire forced him to come from behind. To be derailed in three races and still have two wins is impressive.

His versatility also shines through. Cindric leads the series in average running position, laps run, driver rating, laps led, fastest laps run, and laps run inside the top 15. You have to read beyond numbers sometimes, but you don’t have to look too closely to see that Cindric has been the strongest guy so far this season. If he keeps winning at different tracks, the sky is the limit for this young man. He is under pressure to perform with the eyes of Roger Penske and Co. on him but so far he has proven that he can live up to the pressure.

While there is a lot of uncertainty surrounding the current playoff format and something like a blown engine can derail title hopes, Cindric should absolutely be the favorite. Guys like Hemric, Burton, and Noah Gragson provide a debate to challenge him, but none have had the success Cindric has experienced over the last year. – Luken Glover

Cindric is Not a Lock for the Title

Whoa, let’s slow this train down. While it’s true that Cindric has won two races already, it is far too early to say he’s the title favorite. For one, there’s still 27 races left until the championship at Phoenix. Things can change between now and then.

Last year, he was looking strong in the point standings four races in, but it wasn’t until the 14th race when he really began to show his dominant form. Cindric swept the doubleheader weekend at Kentucky Speedway, beginning a stretch of five wins in six races.

And while it’s true he’s very talented at road courses, he’s not the only one who’s earned victories there. Remember AJ Allmendinger? The No. 16 Kaulig Racing driver, who already has a win at Las Vegas Motor Speedway, is also well-known as an accomplished road-course racer. Four of his six Xfinity victories came at road courses, including the past two events at the Charlotte Motor Speedway ROVAL. Additionally, he won at Atlanta Motor Speedway last year – his first Xfinity win on an oval.

Allmendinger should also be one to watch at the superspeedways, as Kaulig is known for its prowess at Daytona International Speedway and Talladega Superspeedway. Teammate Justin Haley’s three victories all came at these tracks last year.

Haley could also be one to look out for as he runs well on road courses too. He earned top 10s at Mid-Ohio Sports Car Course and Road America in 2019 and finished second in last year’s event at the Indianapolis Motor Speedway road course. The No. 11 Chevrolet pilot also did well at Richmond Raceway in 2020, finished second and sixth in both races that September weekend.

I can’t go without mentioning Jeb Burton, the third Kaulig stablemate. He’s the only driver besides Cindric to earn a top 10 in each race so far this year. Although he’s only led two laps so far, he’s quietly been in the hunt as each race winds down. His best finish in 2021 is fourth both at Daytona and Homestead-Miami Speedway. Like Haley, Burton also finished second at Richmond Raceway, following that up with a ninth at Bristol Motor Speedway and a fourth place at Martinsville Speedway. He’s also had some good runs at Daytona and Talladega and could very well win there this year.

I believe another one of the early favorites this year is Daniel Hemric. He’s had a very good No. 18 Joe Gibbs Racing Toyota, earning top 10s in the first four races. He finished third at the Daytona road course and Homestead, and looked to be on his way to his first NASCAR win at Las Vegas Motor Speedway. After leading 74 circuits around the Nevada track, he ultimately had to settle for second to Allmendinger. Still, he’s showed that he can run up front; last week he led 44 laps before hitting the wall in the final two laps, placing 23rd.

Another track where Hemric could sneak out a win is Dover International Speedway, where he has three top-five and four top-10 finishes. In October 2018, he led 23 laps but finished seventh. He also led over 100 laps at Kansas that year, and though it’s not on the Xfinity schedule for 2021, he could perform well at another 1.5-mile course. Lastly, he might have a good shot to win at Mid-Ohio as he earned two podiums there in 2017-18.

While Justin Allgaier hasn’t had good results so far this season, he did finish eighth last week at Phoenix after leading 32 laps. He’s also one who can contend with Cindric and probably the favorite of the those already mentioned. He has the experience, as he’s in his 11th full-time Xfinity season, and he also has good equipment to compete for wins, driving the No. 7 for JR Motorsports. Allgaier will definitely be a contender at Dover; he has two wins in the past three years and has earned top fives in all but two events since 2016. Allgaier also won at Road America in 2018 and swept last year’s doubleheader at Richmond. Finally, at Watkins Glen Internationa,l he has four consecutive top 10s, including a pair of third-place finishes in 2018-19.

Other drivers who may jumble the top five in the point standings are Brandon Jones, Harrison Burton and Noah Gragson. All are in good equipment and can win races. Harrison won four times in 2020 while Jones won three and Gragson took two. Jones already has three top fives so far and led 28 laps at LVMS a couple of weeks ago. Though Gragson has struggled, he did lead 34 laps before encountering bad luck at Homestead. His lone top five came at Las Vegas, but he still has the talent to recover from this rough start. Any one of these young wheelmen can show their hand later on this year and win some races.

Besides, the early favorite may not always make it to the Championship 4. Remember what happened to Kevin Harvick in the Cup Series last season? He had a rough Round of 8 that ruined his shot at the championship.

Basically, don’t count your chickens before they hatch – or your early favorite before the playoffs. – Joy Tomlinson