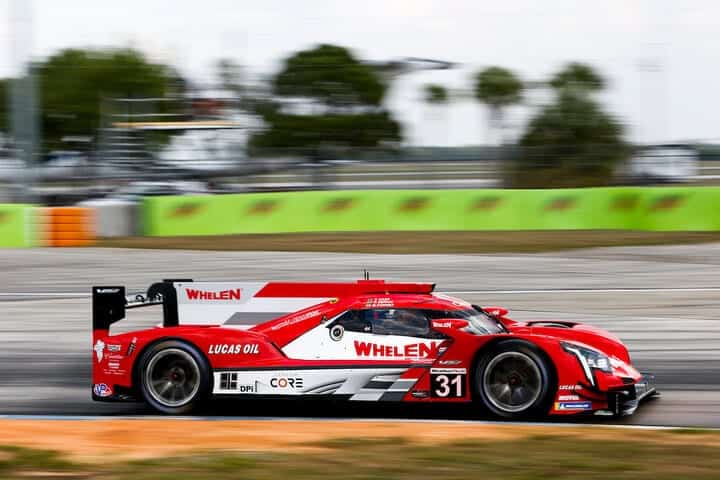 Action Express Racing came to Sebring, Fla. with full intent to flex their muscles.  They did just that Thursday (March 18).  Felipe Nasr was fastest overall for the day with a lap at 126.765 mph during the opening session of the day.

The opening practice went green at 9:05 a.m. Thursday morning.  Cool weather meant that the track was primed for fast running.  Nasr turned in the fastest lap of the day less than 10 minutes into the session.  The lap ended up being four-tenths of a second faster than Chip Ganassi Racing’s Renger van der Zande in a similar Cadillac.

Meyer Shank Racing with Curb-Agajanian’s Dane Cameron was third fastest in the No. 60 Acura, but that came after he triggered an early red flag by stopping on the pit straight.  Luckily, the issue was quickly alleviated.

JDC-Miller MotorSports’ Tristan Vautier was fourth fastest in his Cadillac.  Ricky Taylor was fifth in the Wayne Taylor Racing Acura.  Taylor had his own off-course excursion during the session, but it did not damage the Acura ARX-05.

GT Le Mans saw Corvette Racing debut a special silver and white scheme on both of their Chevrolet Corvette C8.Rs to commemorate their sponsorship with Mobil 1.  Jordan Taylor took the No. 3 Corvette to the top of the class with a lap at 115.358 mph, good for 13th overall.  Jordan’s lap was more than a half-second faster than the Porsche of WeatherTech Racing’s Mathieu Jaminet.  Tommy Milner was third fastest in the second Corvette, while the BMWs of Philipp Eng and John Edwards were fourth and fifth, respectively.

LMP3 saw WIN Autosport enter a Duqueine M30-D08-Nissan, the No. 83, prior to the weekend beginning.  This is a car normally raced by team owner Steven Thomas in IMSA Prototype Challenge, which raced at Sebring last weekend.  Niklas Kruetten had quite a time during the session.  Shortly after the green came back out after Cameron’s stall, Kruetten spun out at the hairpin.  Later on, he stopped on track again, but was able to continue.

Riley Motorsports’ Jeroen Bleekemolen was fastest in his Ligier JS P320-Nissan with a lap at 115.159 mph, good for 14th overall.  Bleekemolen’s lap was seven-hundredths of a second faster than CORE autosport’s Colin Braun.  Despite Kruetten’s early issues, Matt Bell put the WIN Autosport No. 83 third on the timesheets.  Scott Andrews in the second Riley Motorsports entry was fourth, while Sean Creech Motorsport’s Joao Barbosa was fifth.

Much like in IMSA Michelin Pilot Challenge practice, Turner Motorsport’s Bill Auberlen showed his speed early on by topping the GT Daytona class speed chart with a lap at 111.775 mph, good for 25th overall.  Auberlen’s lap was two-tenths of a second faster than the Lexus of Vasser Sullivan’s Jack Hawksworth.  GRT Grasser Racing Team’s Franck Perera was third in his Lamborghini, while Earl Bamber put Team Hardpoint/EBM’s new No. 99 Porsche fourth on the chart.  SunEnergy1 Racing’s Mikael Grenier was fifth in the fastest Mercedes.

In the mid-afternoon second practice session, Nasr kept up his pace from the morning.  He topped the session once again with a lap at 125.453 mph.  Nasr was a little closer to the field this time.  His lap was one-sixth of a second quicker than JDC-Miller MotorSports’ Loic Duval.  Mazda Motorsports’ Oliver Jarvis was third, while Kevin Magnussen was fourth.  Filipe Albuquerque in fifth was only a little more than four-tenths of a second slower than Nasr.

For the Ally-sponsored second car for Action Express Racing, they ran into some trouble here.  Kamui Kobayashi had an incident 33 minutes into the session in turn 10.  He was able to drag the car back around to the pits, but was done for the rest of the session.  The team was able to make repairs and get back out for night practice.

LMP2 saw Jensen once again top the chart with a lap at 122.151 mph, good for seventh overall.  This ended up being nearly a half-second faster than WIN Autosport’s Tristan Nunez.  Smith was third, followed by Era Motorsports’ Kyle Tilley.

The LMP3 class saw Performance Tech Motorsports have some issues.  First, Rasmus Lindh spun off the track at turn 13 right at the beginning of the session.  Later on, Mateo Llarena spun off and collected the tires in turn 3, damaging the nose of the No. 38 Ligier.  Llarena was able to slowly drive back, but not before drawing a red flag.  As the picture below shows from the beginning of night practice, they had to replace some bodywork.

The flamingo is lit. You know what that means ??#IMSA / #Sebring pic.twitter.com/IoBMgNCiUG

Riley Motorsports’ No. 91 was quickest once again, this time with Dylan Murry at the wheel.  Murry’s lap at 114.713 mph (14th overall) was four-tenths of a second quicker than teammate Spencer Pigot.  Barbosa was third fastest, then Dan Goldburg in Performance Tech’s No. 38 prior to Llarena’s incident.  Kruetten was fifth quickest.

Grenier was fastest in GT Daytona with a lap at 111.171 mph (24th overall) in the SunEnergy1 Racing Mercedes.  This was two-tenths of a second quicker than the BMW of Turner Motorsport’s Robby Foley.  GRT Grasser Racing Team’s Tim Zimmermann was third in his Lamborghini, then Michael de Quesada in the Alegra Motorsports Mercedes.  Vasser Sullivan’s Frankie Montecalvo was fifth.

Teams were greeted by warm temperatures as the 90-minute night practice session began Thursday night.  They also had something unusual happen.  At the halfway point of the session, IMSA threw a full course yellow in 0rder to test a new wave-around procedure that will be put in use for the first time during the race Saturday.

Despite everyone doing their best to take the challenge to Action Express Racing, not much had changed from the daytime once the session ended.  The Whelen Engineering-sponsored Cadillac DPi-V.R. was still fastest of all.  This time, it was Pipo Derani that was fastest with a lap at 125.952 mph set with 27 minutes remaining.

Derani’s lap was more than four-tenths of a second faster than van der Zande.  Ricky Taylor was third in his Acura, while Kobayashi returned from his earlier incident to clock in fourth.  JDC-Miller MotorSports’ Sebastien Bourdais was fifth.

While the Ally-sponsored No. 48 did get back out on track for night practice, it was not without issue.  Jimmie Johnson, who is new to racing at Sebring, spun his Cadillac in the ultra-bumpy Sunset Bend.  He was able to continue without incident.

Jensen completed a sweep of all three sessions in the LMP2 class by topping night practice with a lap at 122.100 (eighth overall).  Jensen’s lap was a half-second quicker than United Autosports’ Wayne Boyd.  Aubry was third, while Merrill was fourth.

Jaminet was quickest in GT Le Mans with a lap at 115.508 mph, the quickest lap of the day for the class.  The lap was three-sevenths of a second faster than Corvette Racing’s Antonio Garcia and teammate Alexander Sims.  De Phillippi and Krohn were fourth and fifth.

Bleekemolen was fastest again in LMP3 with a lap at 114.813 mph, good for 17th overall.  It was more than a half-second faster than Pigot.  Forty7 Motorsports’ Oliver Askew was third fastest, then Braun and Lindh.

There was a brief red flag early in the session when Robert Megennis stopped the Vasser Sullivan No. 12 Lexus at turn 3.  The red flag was displayed in order to retrieve the car.  After a 38-minute stay in the paddock, the No. 12 was able to get back out and complete more laps late in the session.

Qualifying for the Mobil 1 12 Hours of Sebring presented by Advance Auto Parts is scheduled to go green at 11:15 a.m. Friday.  The session will be streamed live at IMSA.com.  It will be the first qualifying session that will pay points under IMSA’s new qualifying rules for 2021.  In addition, there will be two rounds of qualifying for GT Daytona teams.  The first one with silver or bronze-rated drivers will set the grid for the class.  The second one with the pro drivers will pay points.

Practice? Oh how I miss thee!

Don’t get me started on qualifying!

Yeah, nothing more entertaining that watching cars going around in circles without actually racing! Practice may help teams, but it is not a spectator sport.