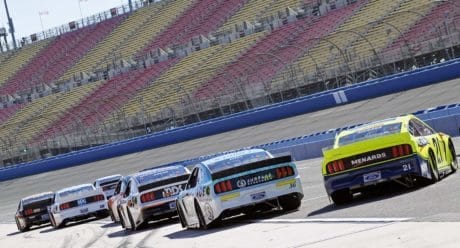 For the most part, NASCAR’s national series have not held their usual pre-race practice and qualifying sessions for the past year due to cutbacks from the COVID-19 pandemic, and some in the sport wouldn’t mind if it stayed that way.

“I think the industry has learned something that we never would have before,” Wilson said. “We would’ve never had the courage, I think, to collectively say, ‘Let’s not practice.’ Right? I mean, that just sounds ridiculous.

“But now we’ve learned that we can show up at the racetrack and race, to your initial question. I would really be disappointed if we revert back to the old habits of three 50 minute practices and qualifying, it’s unnecessary, it’s expensive.

“I’m optimistic that we can take this lesson and extrapolate a better race weekend format going forward.”

Thus far this year, all three national series practiced for the season-opening race weekend at Daytona International Speedway. Both the NASCAR Cup Series and Camping World Truck Series qualified, but Xfinity Series qualifying was canceled due to inclement weather.

Comparatively, ARCA, owned by NASCAR, has completed five races thus far this year between its main series and the East and West divisions. All those events have been with practice and qualifying sessions.

Some have criticized the lack of qualifying in particular as locking out teams that wish to compete; for example, in Xfinity, the Nos. 31, 77 and 03 of Jordan Anderson Racing, Bassett Racing and Our Motorsports have been unable to race due to not having enough points to qualify for the 40-position field.

NASCAR currently only plans to have practice and qualifying in a handful of race weekends in 2021, mostly at new tracks on the schedule. Both the Cup and Truck series will participate in practices and heat races at the Bristol Motor Speedway dirt track next weekend, giving any team that shows up the chance to qualify.

If Toyota didn’t waste the money showing the 2021 Toyota Camry TuRD pace car they would have more money for practice and qualifying.

No practice and qualifying makes too much sense to be adopted. NASCAR is too hide bound to consider it. I’m fine with the starting order based on prior race performance and last years standings. I.e. an algorithm of prior year points position, this year’s starting places, finishing place, laps led, top 10 fastest laps. Its simply math. Qualifying requires prepping a car that has little in common with the one to be raced. So forgetting it and saving a ton of money is a no brainer. And I see no reason why NASCAR can’t expand the fields back to 43 cars. The 36 franchises discourages competition and makes sense only if you have them.

Couldn’t care less about practice but they need to be qualifying again. If they insist on eliminating it – it has to be a fully random selection for all cars.. enough of this make it and take it “algorithm” which is likely 3 people sitting in a room deciding the order.

Less programing equal less advertising which means less money. Let’s see who NASCAR listens to when they make their decision. Te the minimum there should be 1 hour of practice and some sort of qualifying based on speed.

A return to practice and qualifying would be just a needless waste of money and resources. We’ve seen it many times over the years a team has to use a backup car and it makes little difference. And they have the technology now that the cars are ready to go on the track when they are loaded onto the trailer.
To continue it would be nothing but a waste. One of the things that will hopefully come out of these times is t stop doing things just because we have always done them.

Slightly off topic, but when you talk about “we’ve always done it that way”, NASCAR has demonstrated a willingness to adjust to circumstances. Please roll into that willingness to adjust, a major overhaul of the manufactured mayhem that is baked into the super speedway / restricts plate / tapered spacer contrived chaos at Daytona (The Great American Crapshoot) and Talladega. What a ridiculous form of “entertainment”. When one speaks of unnecessary costs, think of the cost of destroyed race cars in the past Daytona race and those many before, not to mention Ryan Newman dodging a bullet a year ago. Please NASCAR, come up with more sensible form of motor sports entertainment.

I disagree 100 percent. My son and I would often enjoy being able to watch some practice and qualifying when we would go to Xfinity races at Richmond, Dover, and some others. It was also a time to be able to get pit passes and hang around the infield. So no practice and no qualifying reduces time for fans to get more bang for their buck, less driver/fan interaction, etc. So I really don’t like the idea at all. What’s one sport where players don’t have some sort of practice before an event?

I read that F1 is going to get rid of practice and qualifying. They’ll show up race morning and start in the order of the last race. Any new teams will start their first race at the rear.

There’s no down side to have a pre-race shake down of cars and equipment. One hour will do it. It will add to the integrity of the cars, equipment and race.
If they decide to qualify, make it right before the race. Only thing they can do to the car after is fill the tank, tighten lug nuts and fix something that broke while qualifying.