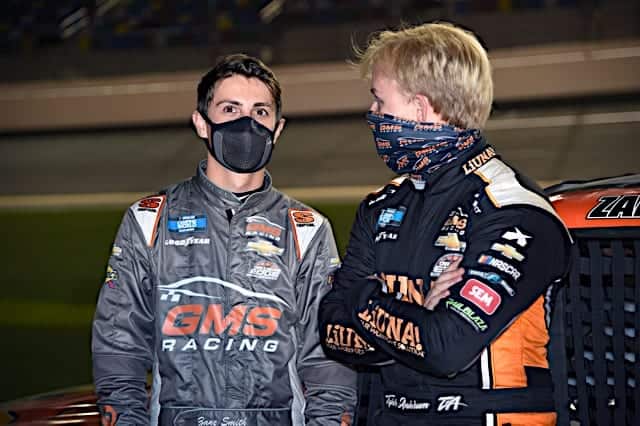 After a two-week break, the NASCAR Camping World Truck Series heads back east for its fourth race of the 2021 season on Saturday (March 20) at Atlanta Motor Speedway. Like last year, Atlanta marks the fourth race of the season, albeit under very different circumstances and taking place almost three full months earlier than the 2020 running.

While the track itself was in the midst of a weather maelstrom this week, there are quite a few drivers surrounded by chaos of their own.

The start to this 2021 season has been an up-and-down one for a number of drivers, least of all Ben Rhodes, who scored wins in the two opening races (at Daytona International Speedway’s superspeedway and road course layouts) and came home 10th at Las Vegas Motor Speedway. John Hunter Nemechek, meanwhile, grabbed the win in Sin City and currently sits atop the point standings, +14 over Rhodes.

Nemechek, Rhodes, Sheldon Creed and Matt Crafton are the only drivers with 100 points or more through three races.

That leaves quite a few drivers whose seasons so far have left something to be desired. In fairness to them, the season-opener at Daytona is never predictable, while the road course was a strange animal in itself. Las Vegas might have been the first “normal” race of 2021, and fortunately for the truckers, there are only two question marks in the 10 races through June: the Bristol Motor Speedway dirt race and the return to Nashville Speedway. This will give those struggling drivers some time to get their seasons on the rebound.

Let’s start things off with the driver 20th in points: Ryan Truex.

Truex has bounced around NASCAR’s top-three divisions for about a decade now. He moved up in 2010, the same year he scored his second consecutive K&N Pro Series East championship, and started out nationally in the Xfinity Series. After a couple years there, he got a Cup Series ride with BK Racing, then moved back down to Truck competition, which was followed by a return to Xfinity and now a full-time 2021 ride in Trucks with Niece Motorsports.

The 2021 season is arguably Truex’s best shot at a victory or playoff contention since 2017, when he came close to winning for Hattori Racing. This year, he’s with Niece Motorsports in the team’s No. 40, but the opening trio of races haven’t gone the way he wanted: he did finish in the top five at Daytona, but that was followed by a miserable trek around the road course the next week, with the Chevrolet’s hood flying up over the windshield at one point.

Truex was caught up in a crash just prior to lap 100 at Las Vegas, having nowhere to go as trucks spun up the track in front of him and collected the No. 40. The team was unable to repair the truck before the damaged vehicle policy forced them to the garage, making it two straight races of finishes below 30th for Truex.

Niece Motorsports teammate Brett Moffitt isn’t much better off as of yet. He recorded back-to-back finishes of 25th in the two Daytona races, but did drive under the checkered 11th in Vegas. He sits 16th in the standings.

David Gilliland Racing has a pair of drivers who have some rebounding to do in Tanner Gray and Hailie Deegan, who sit 21st and 29th in points, respectively.

Deegan gets a bit of leeway, considering she made exactly one Truck start prior to 2021, but that No. 1 truck has yet to finish higher than 24th this year. Her experience should certainly help her, though, as she gets more adjusted to the handling and feel of the series’ vehicles.

Gray, meanwhile, recorded eight top-10 finishes – more than a third of the races – last year, but he does seem to be improving. While he didn’t complete a single lap at the Daytona oval due to the drop-of-the-green-flag chaos, he came home 20th at the road course and 12th at Las Vegas.

And he did finish 11th at Atlanta last year, so this weekend will be a solid chance for the No. 15 team to get back on track.

Despite finishing seventh at the Daytona road course, Derek Kraus‘ season has been rough. He was more or less a human caution clock in the season opener, involved in three yellows and bringing out two by his lonesome, and wound up 32nd in Vegas.

Atlanta might be a boon for Kraus’ season, though. He ended up seventh there last year, and he could easily move up the ranks from his current spot at 24th in points.

Moving over to GMS Racing, Chase Purdy‘s season has been miserable so far. No top-20 finishes highlight the board yet for the driver of the No. 23, but, in fairness, this is his first full-time campaign in the Truck Series. He also has Jeff Hensley atop the pit box, who nearly directed Grant Enfinger to a championship in 2020.

Zane Smith is worth mentioning here as well. After the GMS rookie came in second for the championship in 2020, winning two races in the process, Smith wound up outside the top 15 at Daytona and dead last at the road course. Vegas was a chance to rebound, though, and the No. 21 team took it, finishing sixth and boosting Smith from 18th to 14th in points.

Finally, there’s Smith’s GMS teammate Tyler Ankrum, who might have the most to rebound from of all these drivers.

Ankrum has made the playoffs each of the past two seasons but is nearing two years without a win. He has yet to score a top 20 this season, crashed out at Daytona and Las Vegas and sits a dismal 31st in the standings, second-to-last of all drivers that have raced in all three 2021 events (Jennifer Jo Cobb ranks 33rd).

He’s in good equipment with GMS Racing and has a solid stable around him, so this weekend’s race at Atlanta might be a solid chance for him to turn things around.

Quick shoutouts to a couple drivers making the most of their 2021 efforts so far:

Carson Hocevar sits 10th in the standings after a top five at Daytona and a top 15 at the road course. Enfinger, without a full-time single ride after coming close to a championship last year, is seventh after a top 10 in Codie Rohrbaugh‘s truck at Vegas (Rohrbaugh sits top 20 in points as well).

Additionally, Austin Wayne Self, Danny Bohn and Timothy Peters, the latter of whom runs for brand-new team Rackley W.A.R., all sit in the top 20.