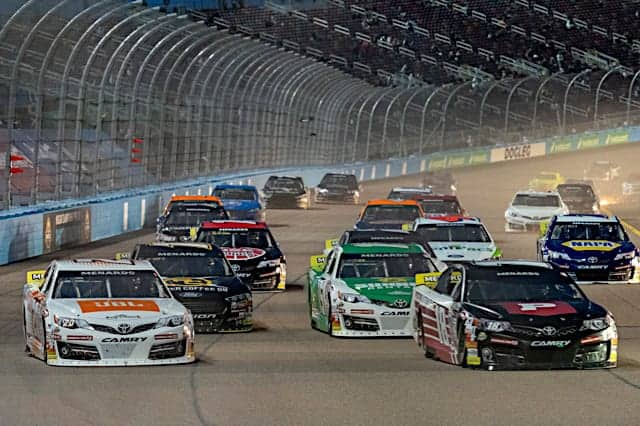 Five races, including one combination race, have been completed across all three ARCA divisions this year. While the main series is on more than a month-long break until its return at Talladega Superspeedway, there have not been any repeat winners in ARCA this year.

As ARCA heads into a lengthy break, after two races, Heim leads Gibbs by two points in the championship standings. Drew Dollar, Kyle Sieg, and Thad Moffitt round out the respective top five.

Without the top-two finishers from last year, Bret Holmes and Michael Self, running full-time this year, who are some drivers who are poised to score their first ARCA Menards Series victory this year?

Sanchez has performed well at Toledo Speedway. In four starts there, he has one top five – a fifth-place finish – and three top 10s.

After his Daytona race resulted in a DNF due to his involvement in a wreck, Sanchez had a fast No. 2 at Phoenix. He was running third, behind Gibbs and Heim, before he slammed into the wall, prematurely ending his second straight race. Nonetheless, Sanchez proved he can battle Gibbs and Heim upfront, vital as he too seeks the championship.

Don’t know what to say………..gutted. I was running P3 and a lap car 3 laps down clipped my right rear and sent me head on in the wall. Can’t thank my team @RevRacin enough. We showed our speed tonight, on to Talladega. pic.twitter.com/aSpDRLYSh9

Sanchez also told Frontstretch while he is obviously looking forward to all the races as he chases the championship, he is excited to race at the road course of the Mid-Ohio Sports Car Course and Watkins Glen International. Moreover, he has the dirt track races at the Illinois State Fairgrounds and DuQuoin State Fairgrounds circled on his calendar. Could one or more of those be where Sanchez celebrates in victory lane?

It was recently announced Jack Wood will indeed run full-time this ARCA season. Unfortunately, Wood’s first race following the news ended on the first lap when he was involved in a multi-car crash. He remains confident in his team though.

It’s has been three really tough races for our @GMSRacingLLC team. I have never worked with a more dedicated group of people and we will pull through. All we need is just a little bit of luck and we will be right there contending for wins.

Except for Phoenix, Wood lacks experience at all other tracks on the ARCA schedule. That, said, the inexperience did not affect him at Daytona as he piloted his No. 21 GMS Racing Chevrolet to a ninth-place finish.

Wood has veteran crew chief Chad Bryant atop the pit box. Bryant served as the crew chief for long-time ARCA team Cunningham Motorsports before purchasing it and rebranding it as Chad Bryant Racing. As an owner, Bryant saw two of his drivers, Ty Majeski and Joe Graf Jr., score their first ARCA wins. Bryant is now tasked with guiding Wood to his first ARCA triumph.

The combination of @DriverJackWood and @Cbryant7722 hasn't even had a chance to show their capabilities after a series of bad luck in every race so far in 2021.

I believe when they have some luck, Bryant will put Wood in Victory Lane.#nascar

Taylor Gray will turn 16 on March 25. Despite his youth, he already has 26 combined starts across the three ARCA divisions. Of those 26 starts, he has one win, 15 top fives, and 24 tops 10s. His lone two finishes outside of the top 10 came at the second ARCA race at Toledo last year when he finished 11th and the second West race at Utah Motorsports Campus, another 11th-place finish.

Gray is a wheelman. In addition to running inside the top 10 this early in his young career, Gray won the penultimate West race last season at Kern County Raceway Park.

At Phoenix, Gray led the field to the competition caution, showcasing the speed of his No. 17 David Gilliland Racing Ford. However, during his pit stop, his crew simultaneously fueled his car and put tires on it, a pit road penalty. As a result, Gray served a two-lap penalty.

Gray later received a free pass to gain one of his two laps back. Ultimately, he finished one lap down, but he wheeled his No. 17 back to a ninth-place finish.

Because he is not yet 18 years old, Gray is ineligible to compete on the bigger tracks. In addition to the combination race at Phoenix, Gray will compete in the full 10-race Showdown as well as the three main and East combination races. Gray is seeking the East title this year, too.

Gray understands he is young but he also is grateful for the experience last year.

Gracie Trotter made history last year when she won at The Bullring at Las Vegas Motor Speedway, the first female to win an ARCA-sanctioned event. Now running part-time in the main ARCA series with powerhouse Venturini Motorsports, Trotter has the chance to further display her talent for even more fans.

In this year’s season opener, Trotter started second and led eight laps. However, she was involved in an incident with teammate Derek Griffith. She later made contact with the wall, damaging her No. 25, eventually relegating her to a 23rd-place finish, four laps down.

Driving part-time, Trotter does not need to worry about points racing. While both Nos. 15 and 25 cars are full-time teams chasing the owners’ championship, Venturini is a winning organization, including winning the 2019 drivers’ championship. Last year, the team somewhat struggled, winning four times. The team is counting on Trotter to return it to its regular winning ways.

Nobody else but Ty Gibbs will win in ARCA if he is racing there. It’s tough for those little, low-budget teams to go up against a Cup team in disguise such as Ty Gibbs drives for. Pitiful.