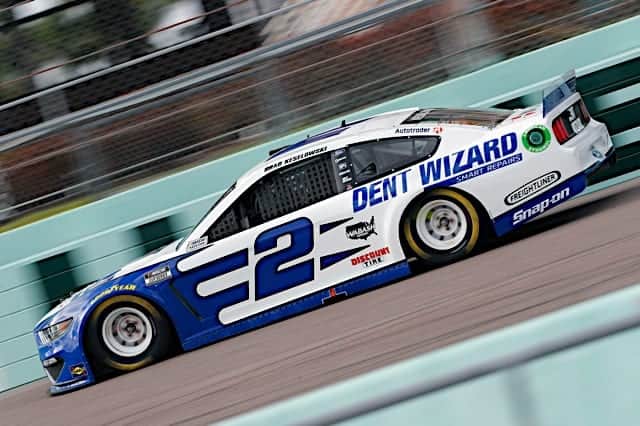 After a couple of weeks out west, the NASCAR Cup Series travels to the Peach State for the 2021 Folds of Honor QuikTrip 500 at Atlanta Motor Speedway. Get your fantasy NASCAR DraftKings rosters ready for this 325-lap event down in Georgia, televised by Fox beginning on Sunday, March 21 at 3 p.m. ET.

Atlanta is a 1.54-mile intermediate oval with one of the oldest surfaces on the circuit. It’s very abrasive on tires, as Larry McReynolds illustrated on Fox Sports last year.

I like to think that @LarryMac28 is still working on this. #NASCAR pic.twitter.com/k6T2yJ5iBQ

As a result, most drivers will need to manage their Goodyears so they can pass cars with more wear later on in a run. That means you’re seeking veterans with quality pit crews who won’t make a major mistake on a green-flag stop.

What drivers stand out among that group? Well, besides those who manage their tires, you’ll really need a dominator in your lineup. In every race since 2014 (one per year), someone has led over 100 laps. Kevin Harvick has dominated in six of those seven races, the lone exception being 2019 when Kyle Larson led 142 laps. Clean air is definitely king here, so expect whomever gets out front to lead a large chunk of the race.

If you can snag one or two lap leaders, you should be able to win your fantasy contests if your other drivers get top 15s or 20s. It’s that type of track.

Before I share my picks for this week, let’s take a look at last week’s results from Phoenix Raceway:

Joey Logano dominated but didn’t win the Phoenix race; instead, Martin Truex Jr. took the checkered flag after passing Logano on a late restart. Additionally, Bubba Wallace was about to get a top 10 when they made the call to stay out, allowing everyone else on fresher tires to pass him in the final laps. He still finished 16th, nine spots further up from where he began.

Tyler Reddick, unfortunately, did not have a good race. The No. 8 Chevrolet driver didn’t show the same speed he did at Homestead-Miami Speedway or at the spring Las Vegas event. It also didn’t help that Reddick hit the wall on lap 262, about 10 laps after he was caught speeding on pit road.

Despite those struggles, this lineup cashed the large $1 single-entry double up and earned $1.50 in the giant $1 Happy Hour.

There’s really no one else who should be at the top of your daily fantasy watch list, as Harvick has led 100 or more laps in seven of the past nine races at the Georgia track. He also has a driver rating of 102.2 from 2005-2020, highest among active Cup drivers. Driver rating is a formula that incorporates several different categories, including average running position while on the lead lap, average speed under green and fastest lap. It can be helpful for DraftKings users who need to know who is hot or not at a certain track.

This year, Harvick hasn’t had the same type of speed that he’s had in years past, though he does have an 8.2 average finish. Crew chief Rodney Childers explained on SiriusXM that some rule changes affected the aerodynamics of their cars, and they haven’t been able to adjust as well thus far in 2021. They started too loose at Homestead-Miami Speedway, then went the opposite direction at Las Vegas Motor Speedway. Harvick wound up one lap down in that event.

The No. 4 Stewart-Haas Racing Ford driver hasn’t even led a lap since the season-opening Daytona 500.  Expect that to change this Sunday as Atlanta is certainly a track where he can prove his dominance.

Like Harvick, Keselowski has also been good in recent events at the Georgia track. He’s won two of the past four races and is due for a third if this pattern continues. He’s also tied with Martin Truex Jr. for the second-highest driver rating.

Though the No. 2 Team Penske pilot hasn’t led as many laps as Harvick, he did lead over 30 circuits apiece in 2018-2019. He’s also added 19 or more fastest laps in each of the past four races.

DraftKings tends to give good drivers who start at the back a higher salary, and Cindric is no different. I honestly thought he would be a bit higher, in the $9,000 range, but I’m glad he isn’t. Since the NASCAR Xfinity Series champion is starting last, he could produce a high fantasy score on DraftKings due to position differential. For example, if Cindric finished 20th, he would score a respectable 42 fantasy points.

Earlier this year, Cindric was in contention to earn a top 10 in the Daytona 500 before getting caught up in a fiery crash on the final lap. He’s looking to do much better in the No. 33 Team Penske Ford this time around.

However, Cindric will need to adjust quickly to how a Cup car reacts on this type of track, as he only has experience in the NASCAR Xfinity Series at Atlanta. In last year’s NXS event there, Cindric led 68 laps in the first two stages before ultimately ending in 16th. However, he does have two prior top-10 finishes in NXS.

If Cindric can keep his car clean, he should be just fine on DraftKings. One note of warning is how his pit crew performs, working as a part-time team not running the full Cup schedule. They can’t make mistakes.

SHR’s issues are not just limited to Harvick, as Custer has had a worse finish in each succeeding race this year. Last week, he appeared to be on his way to at least a top 20 when Wallace made contact with the No. 41 Ford’s bumper. Custer pounded the wall and had to return to pit road for repairs.

Since Custer hasn’t had good results lately, the performance metrics formula put him in 27th for Sunday’s event. If he gets a good result this week, the fantasy score on DraftKings would be fairly high. He showed a top-20 finish last year with no practice was possible after starting 31st, so why should Sunday be any different? Hopefully, the No. 41 crew can get the car dialed in to make a good run by the end of the afternoon.

Stenhouse is an interesting fellow for daily fantasy this year. Though starting in the teens in the past four races, he’s finished in about the same spot. At Las Vegas Motor Speedway, he ended in 11th, +6 ahead of where he rolled off. As a result of this consistency, Stenhouse has been a hidden gem, scoring 30+ fantasy points during this stretch.

The No. 47 JTG Daugherty Racing wheelman has also finished in the teens in every race since 2016 at Atlanta, starting with a 10th-place result. Last year, he wound up a respectable 13th, recording three fastest laps in the process. Stenhouse’s steady performance is what you need as a value play for this spot on the roster.

OK, so Preece hasn’t had good results at Atlanta in the Cup Series yet. However, he concluded the 2019 NXS event in seventh while competing for JR Motorsports.

A couple of weeks ago at Las Vegas, he ended 15th after starting 19th. Preece was also ninth at the Daytona International Speedway road course, scoring 32 fantasy points as a result of his strong run.

Preece currently sits 14th in the point standings but unfortunately doesn’t have enough sponsors to run the full season. That won’t affect his fantasy value right now, but later on, we might not get to play him on DraftKings. Take advantage of his low salary while you can.