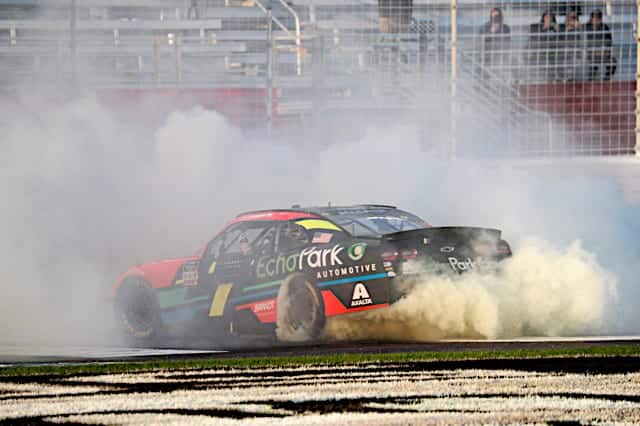 A dismal start to the season was the story for veteran-driver Justin Allgaier, but he has finally captured the flag at Atlanta Motor Speedway, winning the EchoPark 250 and holding off Martin Truex Jr., who dominated the race in his first Xfinity Series return in 10 years. His first top-ten came last week in Phoenix after a slow start to the season.

“First of all God is good man. This one’s for Rowdy,” said Allgaier, emotional, referring to the late Rowdy Harrell, a NASCAR pit crewman. “Just proud of the effort that we put in today.”

Cup champion Martin Truex Jr. made headlines weeks ago after announcing his return to the Xfinity Series at Atlanta. The Joe Gibbs Racing driver has scored five top-five Cup finishes at AMS, including a career-best finish of second in 2019. Lapped traffic muddled his final push to take the win.

Truex, who took the top finish in both stages, was penalized for speeding on pit road during a caution late in the race, dropping him out of the top 20. Over the course of 30 laps however, he made a fierce comeback – battling drivers like Noah Gragson, Christopher Bell and Allgaier to get to the front.

When asked if the penalty sealed his fate, he replied: “I’m not sure to be honest with you,” said Truex. “It was fun until I screwed it up.”

The fireworks didn’t stop after the checkered flag however. Daniel Hemric,  upset after a mid-race pit road incident, interrupted Gragson in the middle of his post-race interview, which triggered a fight on pit road.

During an incident on pit road during the race, Gragson backed up on Hemric’s car, damaging the nose.

“I don’t know why he’s mad. We were behind him coming onto pit road,” said Gragson. “He was in our pit box and I had to come around him … had to back up and get there.”

Gragson continued, “I’d be mad if I was in his shoes based on what he’s done in his career.”

There were numerous on track cautions throughout the race, including a competition caution at lap 20.

At the end of stage one, Brandon Jones was turned on the backstretch, collecting Brett Moffitt and damaging other drivers’ vehicles, including Gragson and Allmendinger.

Jr Motorsports driver Josh Berry was also the cause of a late-race caution, spinning off of turn four. He collected devastating damage after digging into the dog-leg grass.

The NASCAR Xfinity Series will have a two-week break, returning on Friday, April 9, for a night race at Martinsville Speedway. Catch the action of FS1 at 8 p.m. ET.