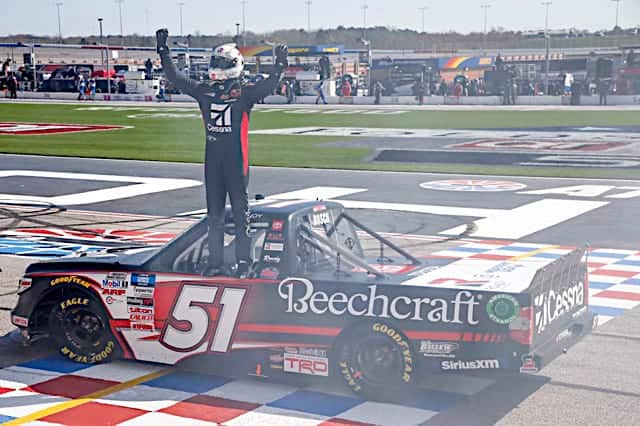 “It’s a great opportunity to race in great stuff with KBM,” Busch told FOX Sports 1 after climbing victoriously out of his No. 51 Toyota. “This Toyota was awesome. Can’t say enough about my guys. Everyone at Kyle Busch Motorsports, they do such a great job and hard work. Without their preparation & dedication, we wouldn’t be as successful as we’ve been as an organization. It’s great to get back to victory lane.”

Kyle Busch Motorsports hired Mardy Lindley, who served as the championship-winning crew chief in the ARCA Menards Series East last year with Sam Mayer, to be atop the No. 51 pit box. This is Lindley’s first win with the organization.

“It’s just a part of having good people,” Busch told FS1. “Coach [Joe Gibbs, his NASCAR Cup Series team owner] always says, ‘You’ve got to have good people to have success.’ We’ve had great people and good people, too. It’s just a matter of evolving. This sport is ever-changing. Six months from now, the setups will be different again. It’s cool to have fresh ideas, different concepts, and things that we can work on and try to improve. It’s good to see John Hunter [Nemechek] come home with another top three today and obviously, him racing for a championship this year, that’s important.”

“That last restart we had, I was just trying to save my tires a little bit, didn’t want to kill them right off the bat,” Hill told FOX Sports 1 post-race. “Whenever it was go-time, I started matching Kyle’s lap times. We had the green flag pit stops, got out in second, pit crew did an awesome job today. I kind of gave that gap up and I could never close it. I was matching his lap times but I needed to be a little bit quicker. Our Toyota was fast. We had to fight a little bit of adversity today – on the restarts, stuff happened and we had to rebound. All in all, a solid day. I wish we were racing here again cause I love Atlanta Motor Speedway. It’s my home track.”

“I definitely did,” he admitted to FS1 about not having the grip to match Busch. “Won stage one & stage two, I felt like we could hang with Kyle. Solid points day overall.” Nemechek scored a race-high 54 points to go along with his two additional playoff points.

“Happy with the day but disappointed. I didn’t have anything for him there at the end. I gotta go study some green flag pit stops to get better there; it’s always a work in progress so we’ll be back at Bristol dirt to hopefully go get us one there.”

ThorSport Racing had two drivers finish inside the top 10 as Matt Crafton was eighth.

Brett Moffitt recovered from a last-minute engine change, thereby dropping to the tail end to start the race, to finish ninth.

Stewart Friesen finished 10th after getting an uncontrolled tire penalty in the pits under the final caution.

The race was incident-free as the only three caution flag periods occurred at the competition caution and the two respective stage breaks. Only 12 drivers were on the lead lap at the finish. The other two drivers on the lead lap were Grant Enfinger, who won this race last year, and rookie Carson Hocevar.

Camping World Truck Series teams will be back in action next Saturday on the dirt at the Bristol Motor Speedway dirt track for the Pinty’s Dirt Truck Race.  The action is scheduled to start at 8 p.m. on FOX Sports 1.

Pulling over so JHN can win Stage 1 and 2 is a bit over the line in my opinion. Kyle is manipulating the points given (and not given) to the other drivers in those stages. Both times, JHN received an extra point for Kyle’s efforts.

I watch all three racing series , but Waltrip running is mouth and nascar allowing Busch to run in the truck races, I’m ready to pull the plug on the trucks. Twice Busch allowed JHN to take the lead and win both stages. It was obvious what happened , but the booth made no comment .

So Martin Truex in the Xfnifity race is OK? Furthermore, Kyle owns trucks which gives the “babies” a chance in the sport, funded by HIS money and HIS sponsors. Which other driver is doing that? Pretty soon half the Cup field will be products of KBM. We already have Bell, Byron, Jones and Wallace. They would be watching Cup races on TV if not for Kyle Busch. Not to mention crew chiefs Rudy Fugle, Adam Stevens and Jason Ratcliff.

We’re talking about the truck race. No need for the deflection.

I could care less about Kyle running trucks. Figured he dominate and he did. Go Kyle.

I don’t like it when Kyle is allowed to manipulate a race to benefit his driver.

Answer: Ego. He can’t win in Cup like he can in the Busch series and Trucks.

I’d like to think NASCAR has some integrity remaining such that they would send along a quiet message to KBM that this behavior won’t be tolerated further but I’m not holding my breath. Two races in a row now manipulated by Kyle. Credit to Vince for immediately calling out what really happened – but Mikey and Blaney immediately jumped in with the fantasy that JHN had “managed his stuff better” and miraculously closed the 1.5 second gap over the greatest driver in Truck history in a lap and a half (and then again at the end of stage two.. amazing! SMH).