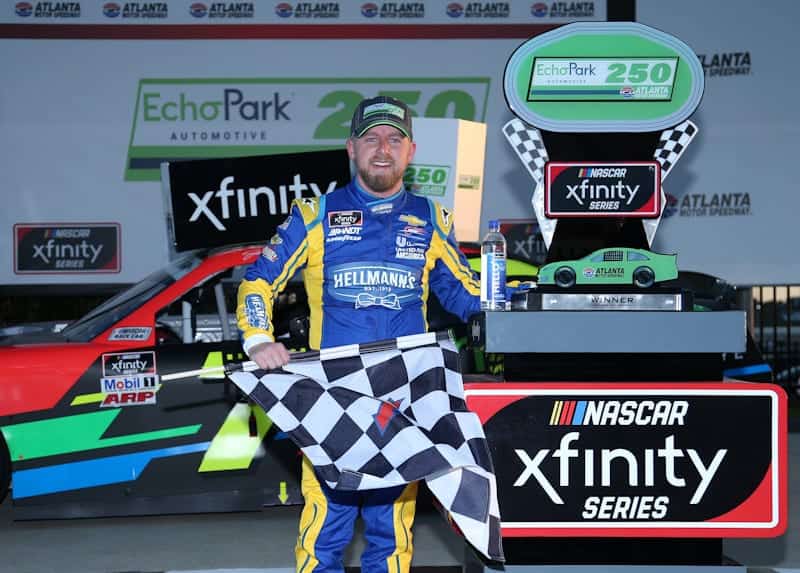 It didn’t take long for two-time Xfinity Series champion Martin Truex Jr. to get his sea legs back after an 11-year absence in the series on Saturday (March 20) in the EchoPark 250 at Atlanta Motor Speedway. It only took Truex seven laps to drive from his 18th-place starting position to the lead. However, a speeding penalty during a lap 112 caution sent him to the back, and he couldn’t quite recover for the win.

Justin Allgaier assumed the lead on the restart with 46 laps to go, but then there was a quick caution, setting up another restart that saw Truex restart 20th. He drove his way up to the top five before the final caution saw the entire field come down pit road for their last set of sticker Goodyears. Allgaier quickly took the lead from Colby Howard, who stayed out, while Truex Jr. restarted fifth.

With 12 laps to go, Truex Jr. found his way to second and got as close as two-tenths from the lead but wasn’t able to close the deal. Allgaier showed grit behind the wheel as he navigated lapped cars, multiple ones at times, to hold off what was the best car at Atlanta.

The EchoPark 250 was also an Xfinity Dash 4 Cash qualifying race. The Dash 4 Cash begins at Martinsville on April 9, with Allgaier, Harrison Burton, Noah Gragson, and AJ Allmendinger being the four going for the $100,000 bonus.

Atlanta Motor Speedway is a place every NASCAR fan circles as a must-watch race. It is one of the few oval tracks on the schedule where a driver truly matters. A driver has to manage tires, search for the fastest line for their car, on top of managing the lines of others. Jeremy Clements put on an excellent demonstration of this during the race.

Clements wound up seventh when the field was frozen for a Brandon Jones–Brett Moffitt incident, which was the de facto stage one caution. During his pit stop, Clements removed the gas can from his pit box. He was subsequently sent to the rear of the field as a penalty. Clements had fresh tires just like most of his competitors, but by the end of stage two, which was a 30-lap run by the time the race restarted, he finished ninth.

When the race’s final stage began, Clements was running fifth. His small team out of Spartanburg, South Carolina, showed a lot of poise and capability. It also demonstrated how talented Clements is behind the wheel when a track, tire, aero package mixed put the race’s outcome in the driver’s hands, rather than those engineers.

Unfortunately for Clements, his Chevrolet contacted Jeb Burton’s Chevrolet on a restart with 46 laps to go, sending both of them into the wall. Clements would rebound to finish 12th. Results don’t always tell the whole story. Clements had enough speed to compete for a top-five and no doubt a top 10.

A simple misjudgment by Moffitt caused a wreck during the one-lap shootout to end the first stage. Brandon Jones had a run on the outside lane off the exit of turn two and brought Gragson with him. Moffitt attempted to slide up between the Jones and the No. 9, but clipped the left-rear of Jones’ car. The No. 19 Joe Gibbs Racing Toyota careened left, leaving Jones no opinion but to turn the steering wheel to the right.

Turning to the right sent his car back up into traffic, immediately collecting Moffitt and Gragson. Allmendinger, who started at the rear and had driven up into the top 10, received right front damage from tagging Jones’ car. Austin Cindric also received right front damage when he hit the rear of Moffitt’s machine, who ultimately had to call it a day. Jones, Allmendinger, Gragson, and Cindric would all continue, but at the time, just a single stage in, Gragson and Allmendinger looked to be the two cars that could potentially go up and battle Truex Jr. for the win.

I’ll be the first to defend Noah Gragson and his aggressive driving and “it’s all about me, I don’t give a hoot about you” attitude. I believe Gragson drives better when he is, to put it cleanly, mad. He has a lot of talent, and it was put on full display with a damaged racecar as he battled Truex Jr. for position in the final stage. But Gragson crossed a line during a pitstop that NASCAR has to address.

Daniel Hemric’s pit stall was sandwiched between Gragson and the No. 99 of Mason Massey. While pitting under caution, Hemric had to drive around Massey more than usual, which led him to go into Gragson’s pit box slightly. Hemric reversed into his stall for service, and Gragson entered his. As Hemric’s crew was servicing his Toyota, Gragson reversed his Chevrolet towards Hemric and his crew. The rear bumper of Gragson’s car made contact with Hemric’s front bumper, and per Hemric post-race, put a hole in his car.

Hemric confronted Gragson post-race and physically touched him. This led to punches being thrown before crews and others separated the two. But this isn’t the issue.

The issue is that Gragson endangered the safety of his and Hemric’s crew members. He could have run over an air hose, causing a crew member of his to fall over and into harm’s way. Or a crew member of his or Hemric’s team could have been sandwiched between the two cars. Thankfully all were aware of their surroundings, and no bodily harm was done. But racecars are not toys. They are heavy machines that can, and have in the past, caused severe injuries on pit road during pitstops. NASCAR must address this situation along with team owner Dale Earnhardt Jr. There are no excuses for Gragson’s actions during that pit stop.

In addition to Clements and his incredible run in his car earlier, Landon Cassill and his JD Motorsports No. 4 team had a strong run in Atlanta. Their best finish this season is at the Daytona road course, which was a 12th-place run. But on an oval, Atlanta was his best finish of 2021 with a 14th-place result. The past three races’ results (Homestead, Las Vegas, Phoenix) were 19th, 21st, and 22nd, meaning today was an outstanding improvement for the Johnny Davis-owned team. Cassill’s 12th-place on Daytona’s road course and 14th Saturday are the best two finishes by any JD Motorsports Chevrolet in 2021. If Cassill can keep putting up finishes like these, he will be a fringe playoff contender. Whether or not he makes the playoffs is another story, but 14th-place finishes give the No. 4 team a fighting chance, which is undoubtedly a big reason Cassill was chosen for this ride.

Truex Jr. was the only NASCAR Cup Series point-regular to drop down to the Xfinity Series this week. He dominated, leading a race-high 105 laps, and won both of the first two stages. His speeding penalty sent him to the back, causing him to use up his tires, even on the final restart when he restarted fifth. Tires were too essential. On top of that, the track changed dramatically. As expected, Truex’s car did behave differently in the middle of the field compared to leading. It is possible the adjustments weren’t correct for him to get the most out of his No. 54 Toyota Supra, especially with track conditions changing rapidly in the last 50 laps.

In case you did forget or didn’t see, Austin Cindric will be in the Cup race Sunday in Atlanta. He’ll be back behind the wheel of the no. 33 Team Penske Ford. He started on pole but fell back early with a poor handling car, and then received damage in the Jones-Moffitt accident. He ultimately finished 13th and failed to score any playoff points for the first time in 2021.

“There’s a hole in the nose of my car, and he got popped in the eye. Where I stand from, we’re in good shape.” – Daniel Hemric

I feel a little cheated as a race fan when the Xfinity series has raced at Atlanta Motor speedway in recent seasons. In 2015, NASCAR reduced the length of the Xfinity Series races at Atlanta from 300 miles to 250. That doesn’t seem right for a 1.5-mile track on the Xfinity Series schedule. I would personally like to see that changed back to 300 miles. A 250-mile race on a big oval is better suited for the Camping World Truck Series.

And another thing: when are current drivers and commentators going to quit toeing the company line by blaming the grass for the misfortunes of drivers when the splitter digs into the grass? Josh Berry had a vicious hit when he spun after contact with Ryan Sieg off the exit of turn four. Berry saved it, but he turned right to reenter the track instead of going down pit road, but the grass was there. His splitter dug into the grass, ending his day.

I don’t ever remember seeing such violet car-on-grass incidents – or at least as often – when a valence was on the front of these cars. Not only would removing the splitter cause less downforce on the front of these cars (Xfinity and Cup Series), creating a difficult-handling racecar, it would save teams money and man-hours when their cars run through the grass. Just ask Ryan Sieg about his innocent spin at Las Vegas two weeks ago.

The problem isn’t the grass – it’s the design of the car!

Spring break has arrived for the NASCAR Xfinity Series, which means they are on vacation for the next two weekends. The series will return on Friday, April 9, at Martinsville Speedway for the yet-to-be-named 250-lap race. It is a Friday night race with a start time of 8:00 p.m. on FS1 and MRN and is the first of the four Xfinity Dash 4 Cash races. The following weekend, the series will be off once again before returning on Saturday, April 24, at Talladega Superspeedway.