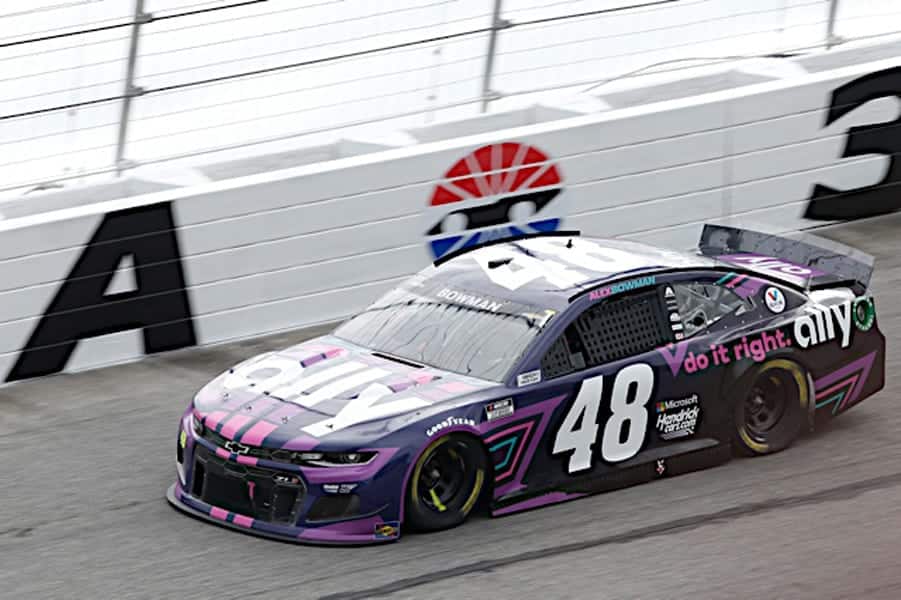 While all eyes were on Ryan Blaney and Kyle Larson’s battle for the win Sunday (March 21) at Atlanta Motor Speedway, Alex Bowman quietly finished third for his first top-five finish of 2021.

“We kind of struggled on long runs a little bit, but had really good pit stops all day,” Bowman said after the race. “Our Camaro was pretty fast. Decent restarts. Nothing went wrong for once. Seems like every race all year something has gone wrong, right?

“I was just glad we were able to put an entire day together.”

Bowman’s best result this season before Sunday was ninth at Homestead-Miami Speedway. In the three races he didn’t place inside the top 10, he was 35th, 27th and 13th.

“We’ve struggled in some areas this year that have been pretty frustrating,” he added. “I feel like we really struggled in dirty air, maneuverability in traffic, restarts and stuff. Worked really hard at bringing something to the racetrack that I could be aggressive with, could drive hard.

“Felt good to have that, to be able to pass cars.”

Two of Bowman’s teammates, Larson and Byron, have each won this season and have combined for nine top 10s.

“I feel like we’re a little behind,” Bowman said. “But [Larson and Byron] specifically are super fast each and every week. It always is good to be able to learn from them. Yeah, everything is going really well. A lot of really smart people working really hard back at the shop. It’s paying off.”

While it was an uneventful day for the No. 48 team, which had stage finishes of sixth and third, that didn’t mean their radio channel didn’t get a workout during the 325-lap race. That was thanks to crew chief Greg Ives.

“I feel like today Greg talked more on the radio than he has any race I ever have been a part of,” said Bowman, who has been paired with Ives for 124 Cup races. “I think it was really positive. I think we’ve been working together for, like, four years now, but we still are learning.”

Bowman added that Ives “has stepped up and kind of identified some areas that he can help me in the racecar, whether it’s on the radio, keep giving me more information, helping me understand things, or telling me things I can do differently, what he sees on the driver data and stuff like that.”

Bowman had a victory at this point last year, at Auto Club Speedway, but went winless the rest of the way before placing sixth in the standings while teammate Chase Elliott won the title.

“I think we ended last year really strong as well, with [Elliott] winning the championship,” Bowman said. “We all ended the year pretty strong. I feel like that’s carried over.”

“I feel like any time you kind of move people around, have some new faces, whether it’s Kyle, [the] new driver on the No. 5, [crew chief] Rudy [Fugle], a new crew chief on the No. 24, typically that sparks positive things pretty quickly. I feel like they both have been great additions.

“But I really think it just stems from ending last year so positive, continuing the positive momentum.”