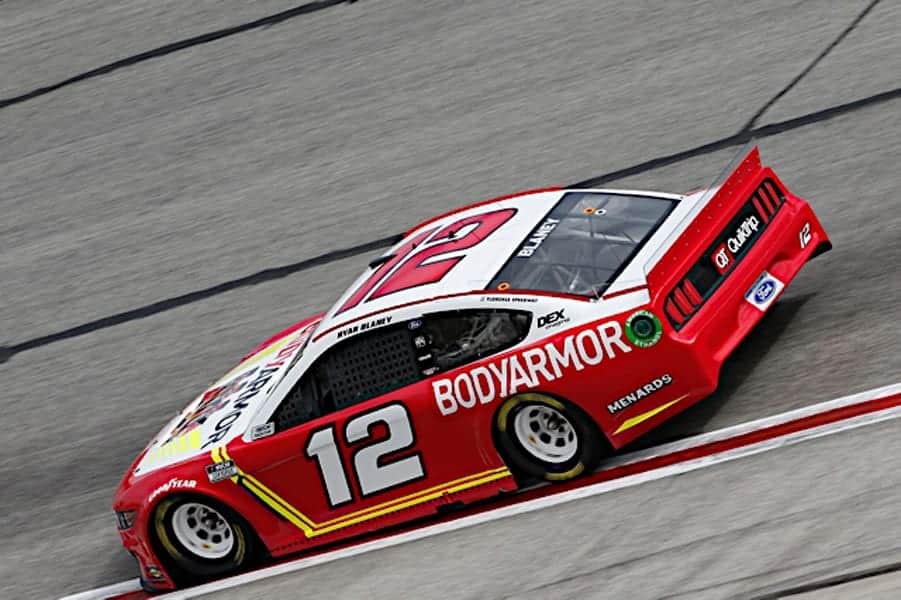 Ryan Blaney chased down a dominant Kyle Larson at Atlanta Motor Speedway on Sunday (March 21), executing an incredible comeback to win the first NASCAR Cup Series race for himself and Team Penske in 2021.

Blaney cut a three-second gap to zero in about 20 laps, passing Larson on the frontstretch and slamming the door on the No. 5 to take the lead with nine laps remaining. The No. 12 Ford cruised to victory from there in the Folds of Honor QuikTrip 500.

Blaney’s AMS triumph came 20 years after his dad had his best chance at a Cup victory, leading 70 laps until a tire issue took him out of contention.

This time around, the son finished the job, earning his first career victory on a normal Cup Series oval layout. His previous wins were at Pocono Raceway in 2017, the Charlotte Motor Speedway ROVAL in 2018 and Talladega Superspeedway in both 2019 and 2020.

“I had confidence we made really good changes to our car,” Blaney said about his  green-flag surge after the final pit stop. “Hoping there would be a long run towards the end because that was the only shot I had to beat him.

“Was just able to drive up, get a good run off of [turns] three and four and get by him.”

Blaney’s surge ruined a dominant day from Larson, who led 269 of 325 laps in an impressive performance. The No. 5 Hendrick Motorsports Chevrolet often looked unbeatable out front, building leads of up to 10 seconds in winning the first two stages.

But Larson remains without a full three-stage sweep in his Cup career, the handling on his car falling apart at the finish. Blaney’s Penske teammate Joey Logano, attempting to stay on the lead lap, also prevented Larson from having clean air down the stretch.

“I definitely would have had a better shot had I gotten by Logano when I got to him,” Larson said. “But, yeah, I mean, it just was hard. My tires were pretty much gone at that point. I was sliding around. I just didn’t get through traffic good at the end.”

It was a horror story of a day for Harvick, last year’s Atlanta winner who led 100+ laps in seven of nine races here entering Sunday. A tire issue forced an extra stop early, trapping him a lap down most of the race. No other Stewart-Haas Racing car cracked the top 15 as that four-car organization continues to struggle.

? "The biggest pile of crap I've ever driven at Atlanta. Can't get it to do anything. The front end absolutely horrendous, when it gets into traffic, it gets worse." ?@KevinHarvick goes a lap down.

The race was relatively clean with just one caution for an on-track incident involving Kurt Busch in stage two. Busch was hooked into the outside wall by Hamlin on a lap 113 restart, caused by brother Kyle spinning the tires up front. An accordion effect resulted on the outside lane, stacking up several cars and leaving Busch an innocent victim getting hooked.

It all stacks up on the restart and Denny Hamlin sends Kurt Busch into the wall. pic.twitter.com/kuW9KhDNel

The only other on-track incident almost turned tragic on pit road. Anthony Alfredo lost control of his No. 38 Ford on a late pit stop, nearly slamming into a couple members of Aric Almirola‘s pit crew. Alfredo’s bumper tagged one of them in the back, but thankfully, no one was seriously hurt.

The race stayed green for that one, creating a final-stage duel between Blaney and Larson. Larson’s lead after the fifth and final caution for Chase Elliott’s blown engine had never been more than three to four seconds, the closest Blaney or anyone had been all afternoon.

After final stops, Blaney whittled that lead down to less than a second by 15 laps remaining, ultimately using a knife-edge crossover in the tri-oval to take the lead. His final margin over Larson grew to a little over two seconds.

“Gosh, we had a great long-run car all day,” Blaney said after the race. “It took us a little bit to get going…we made a really good change, tightened it up where I needed it and it looked like Kyle was getting loose. I’m happy it worked in our favor that there were a couple long runs at the end that let us kind of get there.

“Really proud of this whole [team],” he added. “At the beginning of this year, we’ve had some bad breaks and it’s nice to close out a race like that. That was awesome.”

Blaney became the sixth different winner in six 2021 races, snapping a 28-race winless streak since Talladega Superspeedway last spring. He’s the first from his three-car organization to win this season, perhaps boosted by FOX Sports analysis on the NASCAR Camping World Truck and Xfinity series races the day before?

“I might have to start doing it every week I guess now,” he joked. “…Looking forward to kind of sliding around a bit more next week at Bristol.”

Indeed, the Cup Series next heads to a different type of racing surface: the Food City Dirt Race at Bristol Motor Speedway is set for Sunday, March 28 at 3:30 p.m. ET. NASCAR’s premier division will return to dirt racing for the first time in more than 50 years at the short track, with television coverage slated for FOX.

Did the President call Bubba?

Yep, for 5 big Macs, 5 large fries and 2 large diet cokes. But he’s not the president anymore.

The pit road incident with Alfredo brought back some really bad memories.

Sure did, scary as heck.