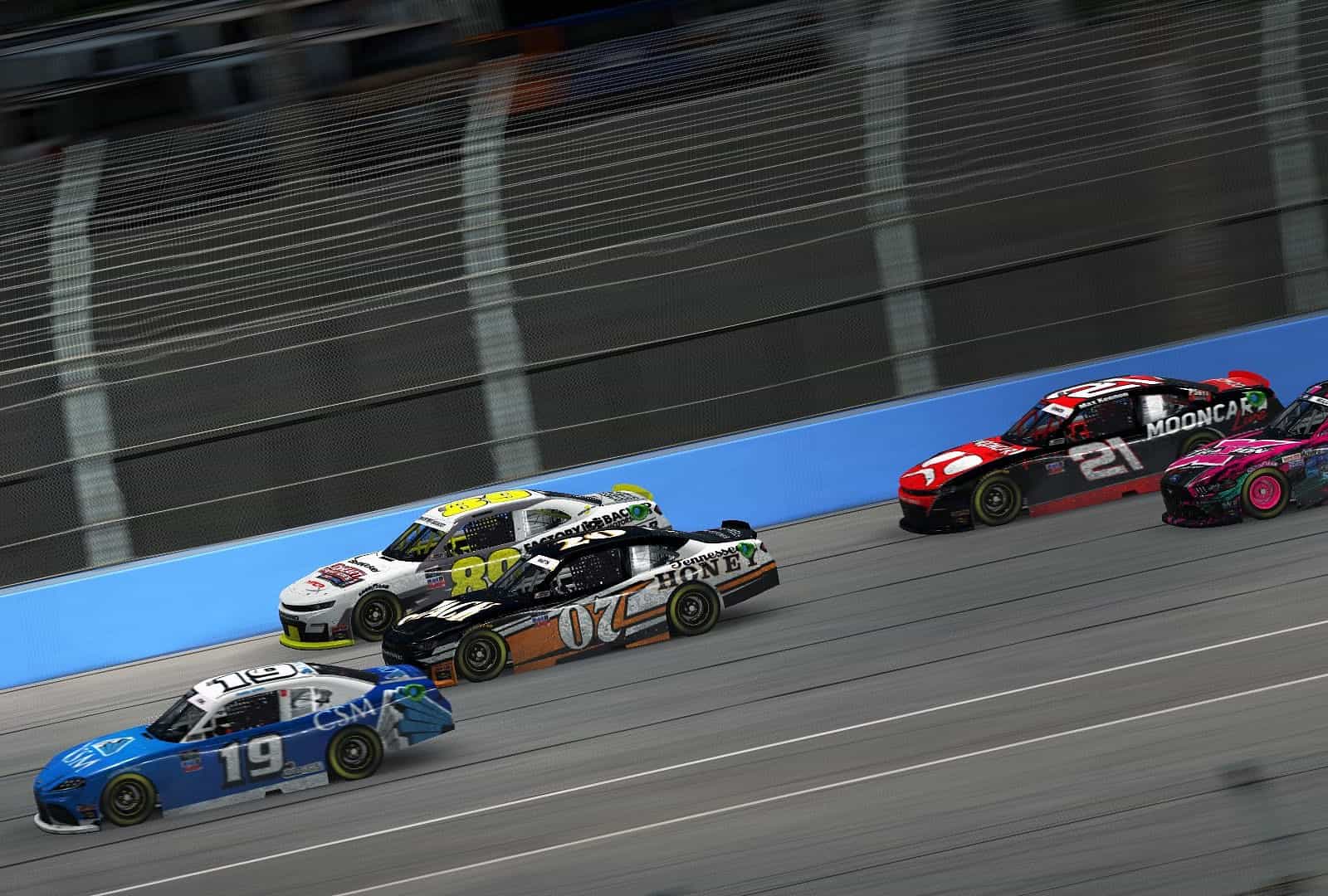 The fifth edition of The Virtual Frontstretch is out for the week of March 14. Besides a few patches from iRacing to remove some things such as the New Damage Model on certain cars that incurred glitching, as well as update the NASCAR dirt tires to behave more “realistically” with real driver input, it was a quiet week otherwise.

Here are the recaps for the big series this past week and a look ahead at the next issue.

It was a dominant Sunday evening for Kollin Keister at the legacy version of Phoenix Raceway. In his third start of the season, Keister was able to put a full race together after taking the pole position, leading 153 laps and not quitting when a different strategy took him off the point towards the end.

It was Keister’s Spacestation Gaming teammate, Collin Bowden, who tried to outplay him with a two-tire stop. On the last lap, Keister used his virtual front bumper to move Bowden out of the groove and put the no. 35 back into the lead and into victory lane for the eighth time in his FTF Cup Series career.

Kollin Keister DOMINATED tonight at the legacy Phoenix tonight, performing a flawless bump-and-run on his teammate Collin Bowden on the final lap to get back to the lead and win his first race of the season, the Racing boi short LIVE! 300k!#FTFCup pic.twitter.com/YOqj07DROC

Will Norton split the teammates at Spacestation gaming with a second place finish, and now leads the points after five races. Michael Guest hasn’t shown up for the last two events, but still leads the playoff grid with two victories.

Monday’s penultimate Round of 7 race was originally scheduled for Chicagoland, but instead moved virtually across the country to Auto Club Speedway in California following iRacing’s Season 2 updates.

With no drivers locked into the Championship 4 coming into the Big Green Egg 150, all four spots were up for grabs in the 75-lap feature on Monday night.

Ryan Vargas took the pole position alongside playoff driver Max Kennon and led the field to the green. In the first half, there were a handful of cautions that claimed the likes of Vargas, David Schildhouse, TJ Majors, Stefan Wilson and DJ Cummings.

Once things settled down, the race restarted for the final time on lap 52 with 24 laps remaining. Will Rodgers led at first but Anthony Alfredo took control at lap 57. Anders Krohn entered the conversation with eight to go, leading a few laps in the process, but at the end it was Alfredo holding on for the victory.

FINAL LAPS: @anthonyalfredo holds off @AndersKrohn in a WILD 1 v 1 battle to the checkered flag at @ACSupdates #BigGreenEgg150 | @BigGreenEgg pic.twitter.com/KhjFT8FN3A

Alfredo joins Rodgers, Preston Pardus and Nick DeGroot in the Championship 4 finale at Atlanta Motor Speedway. The drivers will all be racing in NASCAR Camping World Truck Series vehicles.

ROAD TO PRO QUALIFIER ROUND: Race 2 at Atlanta, Mar. 18

A total of 31 splits from Atlanta Motor Speedway fired off on Thursday night in the eNASCAR Road-to-Pro Qualifying iRacing Series.

This week’s top split on Podium eSports saw redemption for Darik Bourdeau, runner-up last week after giving up the lead late to Parker Retzlaff at Las Vegas Motor Speedway. This week, Bourdeau was able to run the gauntlet on the rest of the field in the 167 lap race, leading the most laps en route to the victory.

There was only one caution in the split with the highest-ranked drivers at lap 50. Other than that, the race stayed relatively clean with no drivers going over five incident points in the entirety of the race.

P1!!!! What a truck, thanks to @DeadzoneRacing for the absolute long run ripper. Took the lead on a restart then never looked back. What a way to start the season.

Onto Richmond in 3 weeks.

Second split on STN Racing had former eNASCAR Coca-Cola iRacing Series driver Michael Guariglia in victory lane. The caution flag flew with just under 20 laps to go with Guariglia out front. On the restart, Guariglia held on to the top spot over Blake McCandless and Collin Bowden to take his first victory of the season.

Bourdeau moves into the series point lead while the cutoff belongs to Alek Martinez and Dalton Collins.

FTF Racing will return to the legacy Car of Tomorrow vehicles for their sixth race of 2021, the Kickin’ The Tires 500k at Atlanta Motor Speedway on Sunday night at 8:00 p.m. ET on BottomSplit.

Monday Night Racing Presented by Tufco Flooring will also be at Atlanta to crown a champion in the season finale on Monday night. The Tufco Flooring 125 will go live on the secondary Podium eSports channel, Podium 2, at 8:00 p.m. ET.

NOTE: My apologies for a light recap this week. I’ve been deeply under the weather since Wednesday, and to put this together took a lot. Mooncar is wrapping up sign-ups for their Premier Series over at moonvision.live, and the 100% Cup Series coverage races on Saturday nights on 3 Wide TV. Their latest race can be found on their YouTube channel.