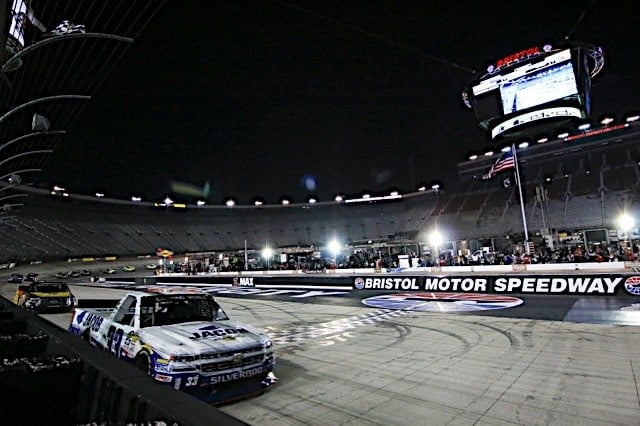 After one year away, the NASCAR Camping World Truck Series returns to dirt this weekend at Bristol Motor Speedway’s dirt track.

In all, 44 trucks are entered for the race, meaning four will fail to qualify for the main event after the heat races, barring any entry list changes.

JR Heffner returns to the series as Jordan Anderson Racing’s No. 3 driver.

Bubba Wallace will drive Spencer Davis Motorsports’ No. 11 in a partnership with Hattori Racing Enterprises.

David Gilliland Racing’s No. 17 will be driven by Kevin Harvick.

Myatt Snider is entered in Reaume Brothers Racing’s No. 33, while the team’s No. 34 is currently listed without a driver. Jake Griffin was announced as an RBR driver at the Bristol and Knoxville Raceway dirt races earlier this year.

Ryan Newman will drive a No. 39 owned by Brad Means in the team’s first start.

The No. 41 for Cram Racing Enterprises is currently listed as TBA; Dawson Cram has driven the truck in all races so far in 2021.

Kyle Larson is Niece Motorsports’ driver for its No. 44.

Andrew Gordon will attempt his series debut in CMI Motorsports’ No. 49. Trevor Collins is not currently on the entry list but is expected to do the same in CMI’s No. 83; it’ll be Collins’ second attempt after failing to qualify at Eldora Speedway in 2018.

Martin Truex Jr. returns to the Truck Series for the first time in a decade-and-a-half in Kyle Busch Motorsports’ No. 51.

The No. 56 for Hill Motorsports is currently listed without a driver but is expected to be Mike Marlar.

Jessica Friesen is in Halmar Friesen Racing’s second truck, the No. 62, alongside her husband Stewart.

Henderson Motorsports continues its streak of entering races to start the season, with Parker Kligerman again the No. 75’s driver.

Grant Enfinger is in ThorSport Racing’s No. 98.

Daniel Suarez fills in for Kris Wright, who tested positive for COVID-19 last week, in Young’s Motorsports’ No. 02.

The Pinty’s Truck Race on Dirt is scheduled for March 27 at 8 p.m. ET. It’s preceded by a pair of practices on March 26, followed by four qualifying heat races beginning at 4:30 p.m. ET on March 27.

This might be a fun race to watch. I sure hope so. Even better if they get soaked the day before.