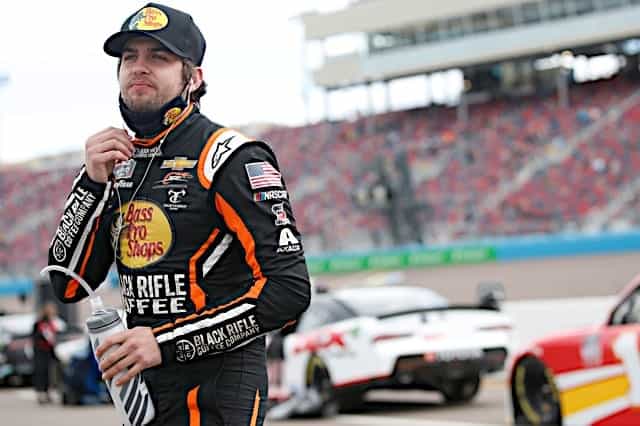 The two drivers entangled in a scuffle on pit road following the March 20 race at Atlanta that included punches and involved several crew members.

Hemric, who drives the No. 18 Joe Gibbs Racing Toyota, was upset after Gragson backed his No. 9 JR Motorsports Chevrolet into Hemric’s car during a pit stop cycle, puncturing the nose of Hemric’s car. Hemric had slid into Gragson’s box following a lapped car overshooting their stall, leading to Gragson overshooting his box as well.

Gragson’s move to back up led some (including Hemric) to believe he had intended to back into Hemric’s car and put the crew members in danger.

“He [Noah Gragson] really needed to back up a long way to try and get in his pit box because of that chain reaction incident.” Miller said on the show. “Unfortunately, the [Nos.] 18 and the 9 were both victims of someone else’s mistake there, and Noah found himself outside of the pit box and the only way he could get back in was back up as far as he could.

“I think he misjudged it there and hit the 18 and all kinds of mayhem ensued there. … We have had conversations with them and we’ll probably have some more this week now that everybody is calmed down.”

Post-race, Gragson tweeted a separate angle of the incident, which showed Hemric overshooting his stall initially.

Here's the full video. Penalty if right side tires are out of the box. Final pit stop. Judge for yourself. pic.twitter.com/2LCQEiUDQ7

However, Hemric was not convinced it told the entire story, claiming Gragson gave him a “middle finger.”

Gragson went on SiriusXM NASCAR Radio’s “XM Speedway” to give his side of the incident.

The Xfinity Series gets the next two weekends off before it heads to Martinsville Speedway on April 9.

Every time NA$CAR tries to explain the reasoning behind one of their decisions is proof that NA$CAR is a member of the BBB. Not Better Business Bureau but Bullsh*t Baffles Brains.

Should have at least been on probation.

I guess they all worked it out in the NASCAR hauler.

Nascar seriously likes conflict to boost their ratings. A jerk like Noah is allowed especially since he is Junior connected.

So true, but how long will Junior put up with his poor results in top equipment and frequent confrontations with other drivers?

You bet they do! More the merrier. Although to Jo’s point – it’s about results at the end of the day. He has been fast everywhere – but has not gotten the results. Somehow they’ve managed to sell candy to kids for many years with possibly the biggest jerk in the sport. But he wins (used to anyway). If Noah runs off a bunch of wins.. no problem but I imagine his act is wearing thin at JRM (with Kelly I bet particularly). Either way – that 9 isn’t like the 7… Noah will be either up to Cup or out soon enough anyway.

How does a driver(not racer) interupt another racer’s interview(with PRN no less), physically acoste that racer and not be penalized?
BBB is right.