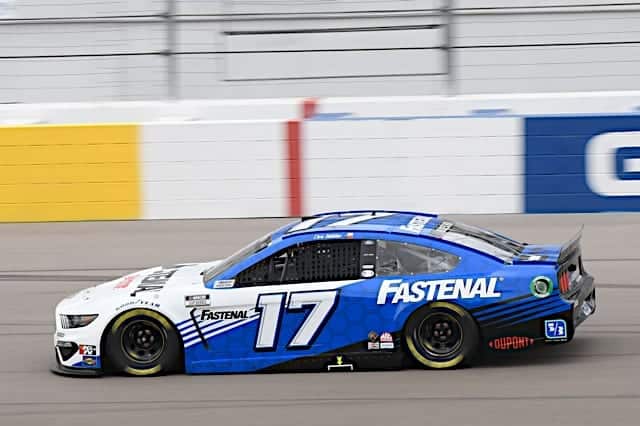 With 20 laps to go, it looked as though Ryan Blaney would have to settle for second in the Folds of Honor QuikTrip 500 as Kyle Larson looked to have the race well in hand. Blaney had a fast car at Atlanta Motor Speedway and had closed to within about a second of Larson. But for several laps Sunday (March 21), Larson’s advantage seemed to hold as Blaney would gain time in one corner and lose a little in another.

The difference came when Larson had to contend with lapped traffic, including both of Blaney’s teammates in Joey Logano. It allowed Team Penske’s young talent to make a furious run with just nine laps to go, executing a razor-edge pass for the lead to pull away for the win.

Blaney noted after the race it was 20 years ago this weekend that his father, sprint car champion Dave Blaney, dominated the Cup race at Atlanta only to see it all slip away when a loose wheel came off his car. It took two decades, but the younger Blaney finally closed the deal this weekend.

After being quietly solid over the last four races, Chris Buescher had a finish to show for it. Buescher hasn’t set the world on fire this year. After a crash in the Daytona 500, the Roush Fenway Racing driver has finished 11th, 19th, 14th, 18th and now seventh at Atlanta. Currently 16th in points, Buescher could flirt with a playoff spot if he can finish 15th or so most weeks. That’s a decent goal for a driver in mid-tier equipment, and Buescher is getting closer all the time.

This week, it’s the NASCAR Xfinity Series race that has people talking. During a round of pit stops, Noah Gragson backed into the nose of Daniel Hemric’s car, damaging the No. 18 Toyota and narrowly avoiding his pit crew. That triggered a post-race fight between the two drivers, with each landing a punch before crew members restrained them.

Gragson said the contact was not intentional (it definitely looked to be purposeful on replay), and NASCAR agreed, declaring Sunday morning there would be no penalty for Gragson.

The Xfinity Series is off the next two weekends, returning at Martinsville Speedway. What’s done is done, but if NASCAR won’t police Gragson’s actions, will the sanctioning body look the other way when another driver does? Hemric’s not the only one holding a beef with the JR Motorsports driver, and sooner or later, somebody’s going to decide that enough’s enough.

NASCAR has sent mixed messages in the past. “Boys, have at it” has been allowed to a point, but blatant, intentional retaliation with 3,000-pound racecars can’t go unchecked, especially on pit road, where crew members aren’t protected by a roll cage. In this case, verbal sparring can’t go on forever, but I’m guessing they allow at least one attempt to put Gragson in his place, depending on where and how it’s accomplished, before putting the kibosh on both sides.

Pole sitter Denny Hamlin and last week’s winner Martin Truex Jr. had races that were just OK.  Hamlin had a slight edge on his teammate, leading 27 laps, but the No. 11 didn’t quite handle the way it needed to.  He finished fourth, over 11 seconds behind winner Blaney. After a promising run in Saturday’s Xfinity race, Truex lingered around the back half of the top 10 for most of the day. While he avoided trouble and drove a solid race, that’s where he stayed, finishing ninth.

Hometown hero and defending Cup champion Chase Elliott had a long way to go from the start, dropping to the rear of the field after two pre-race inspection failures. But he was in the top 10 well before the end of the first stage, leaving no doubt he had a fast Chevrolet. It was contact with the No. 18 of Kyle Busch on the stage two restart which changed the course of his day, causing damage to the No. 9’s nose. Though Elliott was able to hang inside the top 10 for a while, he dropped back a few spots due to problems caused by the contact. Eventually, the engine blew, and Elliott had to settle for finishing 38th.

Recent Atlanta favorites Kevin Harvick and Brad Keselowski ran out of luck this time around. Harvick struggled early, forced to pit for a flat tire and losing a lap in stage one to Larson. As Larson passed him, Harvick radioed his crew that the No. 4 was the “worst pile of crap I’ve ever driven at Atlanta.” He recovered for a 10th-place finish but was never in the hunt for more.

Keselowski, meanwhile, lurked in the top 10 early, but as the laps wore on, he dropped back and lost a handful of spots to 15th before the stage two restart. Contact with Truex in stage two damaged the nose and fenders on the No. 2, and from there, Keselowski dropped back fast. Forced to pit to repair the damage, the 2012 Cup Series champ wound up a disappointing 28th.

There’s no question Larson was the class of the field on Sunday… until it counted. He led 269 of 325 laps, at times with a lead of over 10 seconds. The runner-up finish was his third top five and fifth top 10 in six races. Larson’s success seems to coincide with a resurgence at Hendrick Motorsports, which saw three of its four drivers finish in the top eight on Sunday.

In his comeback season, Larson is making himself into an early title favorite.

But can he keep the wins coming? While Larson is likely to win multiple races this season, he’s also got a reputation for not closing the deal. Sure, some of that can be attributed to his former equipment, and some can be blamed on bad luck.  But the question lingers because Larson could and probably should have double his seven career Cup wins. He’s only won more than one race in a season once, in 2017.

Time is on Larson’s side; he’s only age 28 entering 2021. Still, he needs to step up and let the world know he’s a closer or forever be remembered as the driver who “almost” wound up great.

It’s Bristol, baby. Oh, and that one other detail: it’s on dirt. Dirty, dirty dirt. The Cup Series hasn’t raced on an unpaved surface in 50 years, but it’ll go 250 laps next Sunday. Luckily, there’s practice this week, as this race is a complete unknown. Many of the Cup drivers haven’t raced on dirt in years, if ever. Several will attempt to make the NASCAR Camping World Truck Series race as a warmup.

The lineup will be determined by four heat races on Saturday. They’re only 15 laps apiece, but it seems like 15 minutes per heat might be a bit optimistic.

While a true dirt track might have been a better option, this massive undertaking by Bristol Motor Speedway should be an interesting barometer. If it’s a success, will NASCAR keep a dirt race on the Cup schedule going forward in a nod to the sport’s roots? Who will shine on Sunday?

It’s uncharted territory, and it will certainly be worth watching to see what happens.

How… many weeks will we go before we see a repeat winner?

2021 may be remembered as the season of parity. Generally, one or two teams assert dominance, and one manufacturer figures to be the one to beat while one seems to struggle.

So far, there have been six different winners, and each manufacturer has two victories, with no driver or make really having a massive edge thus far.

It’s great for the sport. The more different drivers winning, the more fans get to enjoy their favorites in victory lane. Many of them will also spend money, buying merchandise to remember the event by, so it’s good all around.

If the trend continues, there could be very few playoff spots available on points. There are several drivers and teams capable of winning races who haven’t yet.

Will we see winner No. 7 at Bristol? This is the week where we likely see a repeat. Larson is killer on dirt, but he’s not the only driver in the race by any means. If he doesn’t win, it’s very possible that someone new will, perhaps Austin Dillon, who won a late model feature on dirt at Bristol just this past weekend.

Whatever order they come in, the more different winners we see, the better it is for the sport, and that’s the positive trend going forward.

Gragson seems to pride himself on being a dirty driver and having no friends on the track. But his lack of on-track performance and arrogant attitude must be causing concern for Dale Jr. HMS has generally prided themselves on “gentleman drivers” like Gordon, Johnson, Kahne, Terry Labonte and Chase Elliott. The only exception has been Kyle Busch who moved on to more comfortable territory. But since Gragson doesn’t have Busch’s talent, it’s becoming increasingly doubtful that Gragson has much of a future. And to think a year ago, his name was being tossed about as a possible replace in the #48.