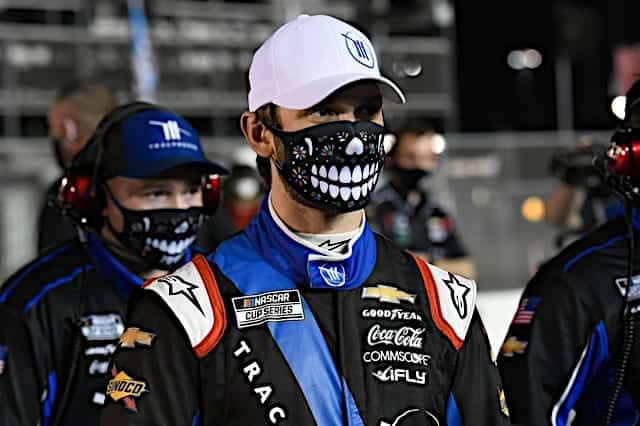 Following last week’s race at Phoenix Raceway, Trackhouse Racing received the news that teams dread to hear. During post-race inspection, Daniel Suarez’s No. 99 Chevrolet was found with two loose lug nuts. That resulted in a one-race suspension for crew chief Travis Mack, along with a $20,000 fine.

In his place, the team brought on Jose Blasco-Figueroa for the Folds of Honor Quiktrip 500 at Atlanta Motor Speedway. Normally, the loss of communication would hurt, but in a year where all teams have limited personnel, the situation was nothing new for Suarez. Suarez adjusted well to a new voice calling the shots, as the No. 99 CommScope Chevrolet entered the top half of the field to finish 19th in stage one.

Stage two was even more promising for the Monterrey, Mexico native as he drove up into the top 15 early on in the stage. That wasn’t enough for Suarez, though. Racing against the big dogs of the sport, Suarez powered past drivers like last week’s winner Martin Truex Jr. for a 10th-place stage result, scoring a single stage point.

In the final stage, there was a moment where the No. 99 looked like a weekly contender. The 29-year-old got up to sixth on a restart and stayed inside the top 10 for the majority of the stage. In fact, it started to look like the hard work would pay off just six races into the team’s tenure.

But it wasn’t meant to be for Suarez.

With just over 50 laps to go, green flag pit stops began. Suarez sped on pit road and had to face a pass-through penalty that trapped him a lap down. In a race that saw several lengthy green flag runs, it was nearly impossible to make up ground with such little time remaining. Ultimately, Suarez brought home his car in 17th.

“I’m very proud of everyone in this group,” Suarez said following the race. “They work very, very hard. They build a very fast car. It was a car capable of finishing in the top 10, that’s for sure. I made a mistake on my part that kind of got us out of contention. But it’s something very good to build on.”

The finish propelled Suarez from 24th to 23rd in the point standings six races in. It’s an impressive start for a single-car organization still finding its footing on the NASCAR landscape.

Suarez was fairly lonely in the dog yard this week, although there were some drivers that stood out. While he did not finish the highest out of all the underdogs across NASCAR, Santino Ferrucci continued to show potential in his migration from the open wheel confines of INDYCAR to the heavy stock cars of NASCAR.

After having to find his rhythm early on in the Xfinity Series race, Ferrucci dodged a multi-car crash and drove up to 11th by the end of stage one. He continued to search for the balance of his No. 26 Toyota Supra, bringing his ride to a 17th-place stage two result.

But it was the final stage where Ferrucci looked like a veteran. The car began to come to him as the run went along, and he entered the top 10 following a round of pit stops under yellow. The 22-year-old began to run top-five lap times and got as high as fourth at one point. Ferrucci spent a lot of the final stage hanging up there before fading to 15th at the finish. It was the Woodbury, Connecticut native’s third straight top-15 performance in four starts, quite a start with a Sam Hunt Racing team that’s stepped up along with him.

“Tough racetrack,” Ferrucci said after the race. “First time ever making laps there and we had another top 15. We’re building one step at a time.”

After his four-race top-20 streak ended last week at Phoenix Raceway, Michael McDowell jumped back into the top half of the field at Atlanta for a 19th-place finish. The Front Row Motorsports driver remains a respectable 13th in points.

In the NASCAR Xfinity Series, Jeremy Clements continued his impressive start to the season with a 12th-place showing. Landon Cassill earned his second top-15 performance for JD Motorsports with a 14th-place result.

The NASCAR Camping World Truck Series also visited the Peach State this week after a weekend off. Parker Kligerman was back in the No. 75 Henderson Motorsports’ Chevrolet Silverado, and he once again had a solid showing, coming home in 14th.

For the first time this season, the NASCAR Xfinity Series will get a breather, and following some post-race drama, it might be needed. While the NASCAR Camping World Truck Series has raced on dirt every year since 2013 (excluding 2020), it shifts venues now to have the inaugural Bristol dirt race. It’s a wide-open opportunity for some little dogs to make their presence known at the front of the field.

Can you believe it has been over 50 years since the NASCAR Cup Series last got down and dirty! Whether you agree with the decision to run dirt at Bristol or not, that moment we’ve all been anticipating is here. Watch out for Stewart Friesen, a dirt ace making his Cup debut in the No. 77 for Spire Motorsports. It would not be the first time Spire pulled off an upset if the 2019 Eldora Dirt Derby winner were to find victory lane. Remember, the team won with Justin Haley in a rain-shortened Daytona International Speedway event back in summer 2019.

Other underfunded teams will have opportunities to have strong days with dirt aces like Chris Windom, Shane Golobic and Mike Marlar entering the field. In a race where the unexpected should be expected, these guys have the experience to land as mentions next week.

Promising day for us and lots of speed from the entire @CommScope team.

We'll take the positives and come back stronger ? pic.twitter.com/CsJwwerLqp

The Trustpage Toyota Supra was one hot rod in a chilly Atlanta & brought us another top-15 finish this year.

Spent a quite a bit of time in the top-5 (as high as p4) in the final stage of the #EchoPark250. pic.twitter.com/RvXVA6sIIN

Really proud of the piece @Mark_C_Setzer and my guys brought to @amsupdates. Had a top 5 car. Hate I got a bad restart. Then we got ran over and the car just wasn’t the same after that. Thanks to @DiecastKings, all the fans that supported it too along with @Spartanburg1400. pic.twitter.com/j2UJQsDux0

With his 19th place run, @Mc_Driver now has a NEW personal best finish at @amsupdates. ?

Thank you to @fr8auctions for coming on board with us today. We can’t wait to see you all again at @MartinsvilleSwy! pic.twitter.com/snBtugxpbq

Few things as fun as 25+ laps into a run @amsupdates , the RR is begging for life & you keep searching for ounces of grip – I tried the wall, usually works.

But something new setup wise, didn’t quite work. Solid P14 on the day for us