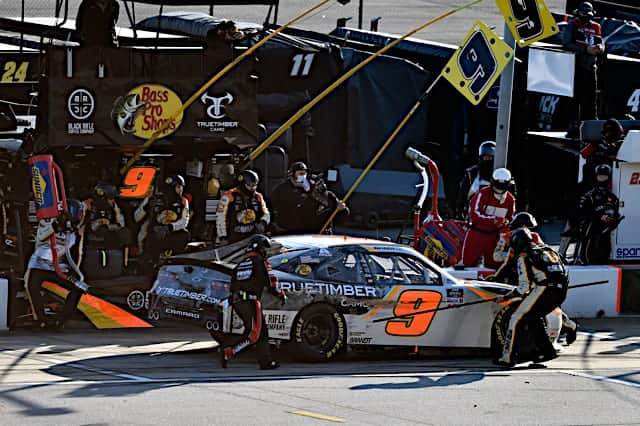 So it should be no surprise yet another incident found its way to the JR Motorsports driver, this time following Saturday’s (March 20) EchoPark 250 at Atlanta Motor Speedway. Daniel Hemric confronted Gragson on pit road after the race, triggering an altercation that eventually led to punches thrown between the two drivers and members of their pit crews.

The tipping point that sent Hemric over the edge originated where it ended – right on pit road – late in the event when Hemric’s pit stall parking job impacted Gragson’s entry to his. Gragson claimed he was forced to correct his car, but backed his No. 9 Chevrolet into the right-front fender of Hemric’s Joe Gibbs Racing Toyota. What made Gragson’s move controversial – in addition to certainly looking intentional – was that Hemric’s pit crew was busy changing right-side tires, and the contact could have led to disaster had Gragson hit Hemric’s car harder or the pit crew.

Gragson argued on social media after the race it was unintentional but a necessary fix.

18 was in our pit box when I was turning into our pit stall. He backed up into his. I was out of position in the box and had to back up to get into my box. Unintentional backing into him. If they'd show the full replay, you'd see I didn't just back into him for no reason.

Here's the full video. Penalty if right side tires are out of the box. Final pit stop. Judge for yourself. pic.twitter.com/2LCQEiUDQ7

Judging by the post-race shoves and swings in addition to his own Twitter follow-up, I doubt Hemric agrees.

NASCAR Xfinity Series officials summoned the 22-year-old for a post-race meeting, but the sanctioning body announced Sunday morning (March 21) that Gragson would not be penalized or punished for what happened on pit road either in or out of the car.

So now, as observers in any facet, we have to ask ourselves: When will Gragson start facing repercussions for how reckless his demeanor on and off the track is?

Gragson has unquestionable talent and speed, evidenced by strong runs and race wins. None of that matters in this conversation.

Atlanta’s fracas is already Gragson’s second notable incident of 2021 just five weeks into the season. The first came at Homestead-Miami Speedway on Feb. 27, where Gragson was two laps away from a win before David Starr, driving for the underfunded MBM Motorsports in 12th place on the lead lap, corded a tire and smacked the wall just in front of Gragson, who was running the high side and piled directly into the back end of Starr’s car.

Gragson followed up by disparaging Starr and the team days after the race was over, long after learning (and for some reason, not believing) Starr’s issue was mechanical and not driver error.

The problem with Gragson is not his incident rate, which indeed is actually problematic this season because he has finished just three of six races in 2021. No, the problem is that Gragson races and retorts with no remorse.

Passion in the heat of the moment is fantastic. “Black hats” in the sport like Dale Earnhardt Sr., Tony Stewart and Kyle Busch – Gragson’s former team owner in the Camping World Truck Series – are beneficial to NASCAR. That’s a fact.

But Gragson is crossing into a territory that frames him as a spoiled pest who is never wrong, even when presented opportunities to quell tension that might alleviate future retaliation against him. That narrative gets strengthened when there is no visible accountability keeping the up-and-coming driver in check.

To be unapologetically oneself is admirable, but not when that personality is dangerous both on and off track – a trait that, while not trying to pick healed scars, was evidenced in his younger years and his treatment of women as noted in past articles on Frontstretch. He was younger then and similar instances have not resurfaced, so it’s fair to give him the benefit of the doubt that he has matured in that respect.

Even with that said, Gragson clearly still has plenty of maturing to do. It’s to the point where his car owner, Dale Earnhardt Jr., has had to address Gragson’s personality and behavior on his massively successful podcast multiple times – first after the Herbst incident at Texas in July 2020 and again as recently as the Starr incident at Homestead.

And yes, we will be getting an update on this week’s Dale Jr. Download regarding Earnhardt’s feelings about this latest dust-up.

Gragson’s behavior, lack of remorse and reckless abandon has garnered him plenty of fans but plenty of on-track enemies who can easily prevent further success for the No. 9 team if he doesn’t address the issues at hand. He first has to recognize, though, there are indeed issues to be addressed.

Officials have spoken with Gragson. Presumably, the owners at JRM will speak with him. Gragson has myriad time and opportunities to grow, mature and become a more respected competitor by his peers.

Now, it comes down to his willingness to do so.

Years ago drivers like Ron Bouchard won many regional races before getting an opportunity to run in the big time. His many fans watched every Sunday. How many fans does this punk Gragson have beside his Dad sitting in a jail cell? Nascar is trying to sell these kids but I doubt there’s a lot of enthusiasm for them. Frankly it disgusts me to see these rides go to wealthy or super connected punks.

if sponsors start calling jr motorsports not liking their driver’s behavior, then maybe something will be done. i don’t care what nascar said about it being a non-incident, there were pit crew members servicing the car when noah backed into hemric’s car.

the kid might be a good, passionate racer, but he’s got to harness that temperment. nascar wasn’t too happy with dale sr’s temperment and behavior in the beginning. numerous drivers use to complain about his driving methods.

I don’t think drivers nowadays have the benefit of time to improve their images and attitudes, like they did in Dale Sr.’s time. Gragson is less than a year younger than William Byron, 3 years younger than Chase Elliott and 4 years younger than Christopher Bell and they all have solid Cup rides without any of Gragson’s baggage.,

I posted this with another related article:

Gragson seems to pride himself on being a dirty driver and having no friends on the track. But his lack of on-track performance and arrogant confrontational attitude must be causing concern for Dale Jr. HMS has generally prided themselves on “gentleman drivers” like Gordon, Johnson, Kahne, Terry Labonte and Chase Elliott. The only exception has been Kyle Busch who moved on to more comfortable territory. But since Gragson doesn’t have Busch’s talent, it’s becoming increasingly doubtful that Gragson has much of a future. And to think a year ago, his name was being tossed about as a possible replace in the #48.