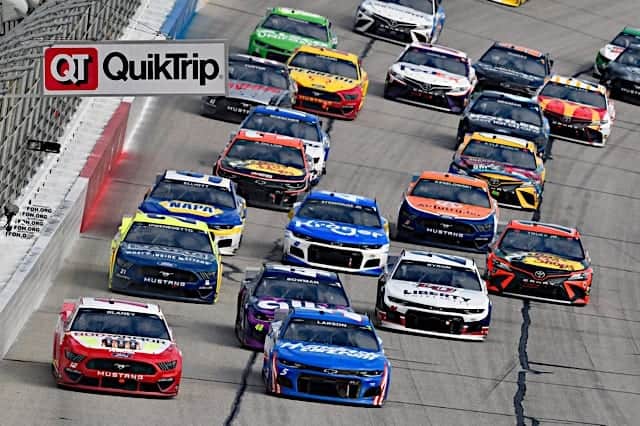 1. Time to Play in the Dirt

I cannot wait for this weekend. Cannot. Wait.

I’m endlessly fascinated to see what will happen in both races on the Bristol Motor Speedway dirt. Fair to say I’ve not anticipated regular season races quite like these two for some time — a decade or more at least.

All told, some 23,000 cubic yards of compacted dirt were hauled into the Coliseum, or around 2,300 truckloads worth. The 36-degree banking in the corners is now reduced to about 19 degrees, thanks to something in the region of 9 or 10 ft. of dirt added to the high banks.

Part of the attraction of the Bristol dirt races is the sheer unpredictability, the utter unknown of how it will all play out. Will we get an unexpected winner? Or will it end up being one of the usual suspects?

What a return to Cup competition it has been for Kyle Larson. Yes, Sunday’s race didn’t end as he would have hoped but it was another dominant day for a driver who has barely skipped a beat since his return to the Cup Series. In fact, if anything, he already looks much better. And it’s not a stretch to say he could easily be looking back at three straight wins already.

Some of the early success is undoubtedly equipment; the Hendrick Motorsports outfit looks to be the class of the field in the early going in 2021 as indicated by a series best 379 laps led, the win at Las Vegas Motor Speedway and three top fives. Hamlin is the next closest with 210, followed by Joey Logano with 198 laps led.

But it’s also a nod to just what a brilliant driver Larson is — there’s a reason Tony Stewart really, really wanted to sign Larson as evidenced by this reply on an old Instagram post to a fan asking why he hadn’t signed Larson: “trust me I tried. Learn all of the details before you bash me. I tried for the last 4 years. Ford wouldn’t approve it. I TRIED.”

We’ve seen before that picking a title favorite at this early stage is instructional at best, but on the balance of play so far, Larson is seriously putting himself in the conversation to win the title.

With the abbreviated test session in the books, it’s time for the serious business of Formula 1 to begin. And no, I’m not talking about the excellent new series of F1: Drive to Survive on Netflix either, although do check it out if you haven’t before; it’s a brilliant motor racing show.

This Sunday (March 28), we get underway with the Gulf Air Grand Prix at the Bahrain International Circuit. The track has hosted F1 races since 2004, with seven-time champion Michael Schumacher winning the inaugural event.

All eyes, as ever, will be on Lewis Hamilton and Mercedes — the dominant force in the turbo-hybrid era. The British driver, recently knighted, is looking for an record-eclipsing eighth championship (and fifth in a row).

But after a difficult and interrupted test for Mercedes, the Red Bull pairing of veteran Sergio Perez and the Max Verstappen in particular might just be daring to dream in 2021.

Last season, due to schedule fluctuations brought on by the global pandemic, the circuit hosted two events albeit using different configurations — races won by Hamilton and Perez, respectively.

4. The Theater of the Mind

Growing up in England, I listened to soccer on the radio all the time. In part it was necessity, as only a select few games were broadcast live across the season.

Quite the difference to what we can access now live sports-wise, that’s for sure. This past weekend, I watched the race from green flag right up until about 30 to go when for various reasons I had to step away. So I ended up listening to the radio (albeit via the NASCAR app on my smartphone) and loved every second listening to Ryan Blaney chase down Larson.

There’s a quintessential quality to a great radio broadcast namely painting a vivid picture with just the power of your words. The PRN team this Sunday and the MRN team both do such a great job. And just for a minute I felt 20 years younger, and that, my friends, is never a bad thing.

And finally, a quick shout out to Sunday’s race winner Blaney, who picked up his fifth career victory in 204 Cup starts, the fifth straight season in which he’s won a race.

(Side note: This win brought great joy to a close friend of mine as evidenced by his ebullient texts post-race, and that’s a good thing in this strange world of ours.)

In the last two seasons, the Team Penske wheelman has won one race, had 11 top fives (speaking to speed) and 18 top 10s (17 in 2019), and finished seventh and ninth in the overall standings.

The big question now is can Blaney build on this, win multiple races in a season and challenge deep into the playoffs? Or to put it another way, can Blaney have a Chase Elliott-style breakout? This is the earliest in the season he’s ever won a race, and he’s clearly got some horses under the hood of the 12 car.

Watch this space, as they say.

How refreshing it would be to see both Larson and Blaney have breakout seasons and challenge for the championship. They have the speed, but can they find consistency? We’ll see.

The only good thing to come out of the Atlanta Cup race was Ryan Blaney passing The Second Coming of Petty and Earnhardt.

It’s eating you up huh.

I thought Jimmie Johnson was the second coming of Petty and Earnhardt.

Danny, you’re so right about racing on the radio. I still have fond memories from the 60’s & 70’s of listening to the Indy 500 on the radio, long before they ever dreamed of showing it live on TV. As nice it is to watch a race live, there was something special about those Indy 500 radio broadcasts.

I can still remember listening to Sid Collins from the track’s broadcast booth. He’d call the start and then pass it off to the 5 reporters stationed around the track. As the cars circulated the track, through turn 1, turn 2, down the back stretch, into turn 3 and through turn 4, and finally back onto the main straight to complete lap 1, reporters such as Howdy Bell and Doug Zink would describe the action at each turn! It was wonderful to listen too. Besides Collins, there was Lou Palmer, Fred Agabashian, the track historian Don Davidson, and may others who I’ve long since forgotten.