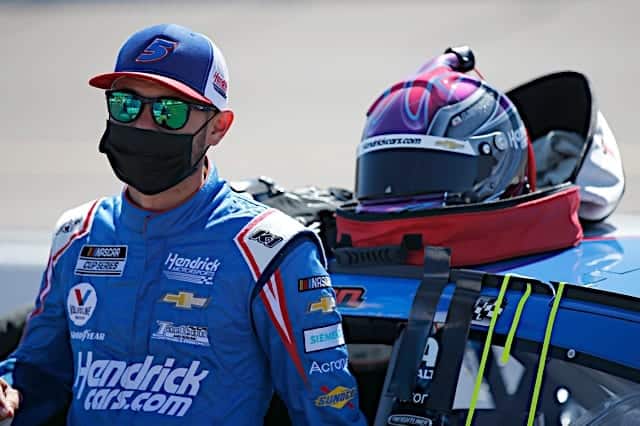 Throughout the history of NASCAR racing, the sport featured occasional stars with particular skills that shone on certain tracks. On the road courses, drivers like Dan Gurney, Marcos Ambrose, Boris Said, Scott Pruett and Ron Fellows excelled. On superspeedways, Michael Waltrip, Brad Keselowski, Sterling Marlin, Ernie Irvan and Dale Earnhardt are among the first names that come to mind.

But, in light of the NASCAR Cup Series’ historic return to dirt this weekend at Bristol Motor Speedway, this edition of the Frontstretch 5 will feature a new category of specialized drivers – dirt aces. Of course, it’s been 50 years since the last NASCAR Cup Series race on dirt, which means a whole new generation of favorites will emerge and further etch their names into dirt racing history as a whole.

When you think of drivers who excel on dirt tracks, Kyle Larson is the go-to name that most fans think of first. Growing up racing midgets and sprint cars on dirt tracks in his home state of California, he became a natural rather quickly. In 2011, he won Rookie of the Year honors in the USAC Silver Crown Series. He’s a three-time Turkey Night Grand Prix winner, won the 2020 edition of the Hoosier Hundred and is the current two-time defending champion of the Chili Bowl Nationals.

Even with his busy schedule in NASCAR, Larson has had plenty of warm-up time on the dirt prior to this week’s events at Bristol. During his suspension in 2020 for uttering a racial slur on a live iRacing stream, he was able to rack up numerous wins in sprint car competition. In the Bristol Dirt Nationals last week, he ran second to Jonathan Davenport in the Super Late Model feature event.

With a win at Las Vegas Motor Speedway earlier in 2021, a guaranteed spot in the playoffs and a stinging runner-up finish to Ryan Blaney at Atlanta Motor Speedway last week, you can guarantee that Larson will be extra-motivated to continue his hot season by getting the win on Bristol’s dirt surface on Sunday.

In the shadow of Larson lies Christopher Bell. He, too, has a brilliant record in the realm of midget and sprint car racing. He won the 2013 USAC National Midget Series championship, has three Turkey Night Grand Prix wins and won three consecutive Chili Bowl Nationals in his home state of Oklahoma (2017-19).

After continuing to build up his dirt resume, Bell was picked up by Kyle Busch Motorsports at the midpoint of 2015. In just his third Camping World Truck Series start, he scored his first career win at Eldora Speedway, holding off a number of other hungry dirt racing veterans and battling hard with Bobby Pierce to do so.

Fast forward to this year, where Bell comes to Bristol in his sophomore Cup Series season. He already has his first win, coming at the Daytona International Speedway road course in February, and by virtue of that victory has already a secured playoff berth. A win for the 26-year-old would indeed be special. But don’t count out the possibility of he and Larson re-enacting their classic Chili Bowl battles in doing so. Now, that would make for a fun show.

Chase Briscoe’s racing career began by following in the footsteps of his father Kevin and his successful sprint car team-owner grandfather Richard. During his youth, he built up his driving skills around these cars and gained a good following for himself in Indiana, especially after establishing himself as the record-holder for being the youngest driver to win a 410-sprint car feature at just 13 years old. Like Larson and Bell, he is also a yearly competitor at the Chili Bowl Nationals. The genesis of his full-time stock car career in the ARCA Menards Series was helped in large part thanks to his friendship with Bell.

In addition to the 250-lap Cup Series event on Sunday, he will also attempt to make the field in Saturday night’s Truck Series event, driving Roper Racing’s No. 04 Ford. The current Rookie of the Year candidate has a best finish of 18th in his first six Cup Series starts and is the defending NASCAR Xfinity Series winner at the speedway (albeit, of course, on asphalt). Should outside forces fail to hinder him along the way, look for the 26-year-old to improve on his career-best finish immensely.

Another young gun with plenty of dirt racing experience to speak of is two-time Xfinity champion Tyler Reddick.

Like Larson, Reddick began his career competing in a plethora of vehicles on dirt in California. But the class where he primarily rose to prominence was in the late model ranks, where at age 15 he was competing against the likes of Scott Bloomquist, Jimmy Owens and Don O’Neal. He is the youngest polesitter for the World 100 at Eldora and the youngest winner in the Lucas Oil Dirt Late Model Series, thanks to winning the East Bay Winter Nationals. His Truck Series record at Eldora Speedway contains two top-five finishes in three starts.

Although Reddick’s success in NASCAR’s other two series is undoubtedly good, the 25-year-old is still winless in 44 career Cup starts. Perhaps his fortune can turn around for him on the type of track surface that suits him the best.

Coming in shotgun in this round of top picks for the Food City Dirt Race is Ontario’s own Stewart Friesen. The 37-year-old has been immersed in the world of dirt track racing throughout his life, starting his career at his family-owned track of Ransomville Speedway in western New York. From there, he steadily rose up to the big-block modified ranks, capturing several track championships and hundreds of checkered flags all across the Northeast. This included five wins in the annual DIRTcar Super Dirt Week 200 in 2018.

Friesen then made his first splash in the Truck Series at Eldora in 2016, running inside the top 10 for the majority of the race before a broken oil cooler dropped him down to a 28th-place finish. But his following three races at Eldora resulted in his first career win in 2019, three podiums and two poles. He later grabbed another win at Phoenix Raceway before finishing fourth in the final standings in 2019.

For Bristol, both he and wife Jessica will compete in Saturday’s Truck Series event together for Halmar Friesen Racing, followed by the husband’s maiden Cup Series start on Sunday in the No. 77 Chevrolet for Spire Motorsports. It is his first start, after all, so the task of a win may be a tall one. But given how solid his background is on these types of tracks, along with the amount of track time he’ll receive beforehand, his debut could be a magical one.

I just love these articles.