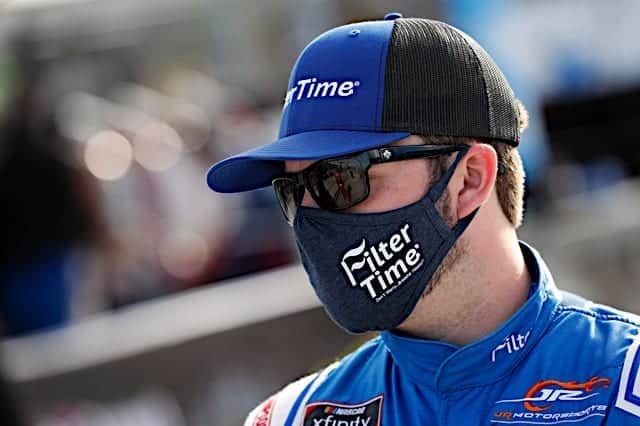 There’s an overused observation that for every driver that has risen up from the short-track ranks, having gotten the big break at the right time, there are thousands of other kings of their short-track kingdoms whose accolades are mostly limited to those bullrings.

For example, while Joey Logano, David Ragan and Reed Sorenson got their chance to race for some of NASCAR’s top teams in part due to their credentials from racing Legends and Bandolero cars, those such as Casey Roderick and Doug Stevens are famed for their exploits on a smaller level.

That’s where Josh Berry comes into the picture.

A NASCAR Weekly Series Champion and late model ace, Berry has the opportunity that many drivers could only dream of – an opportunity to drive multiple races for one of the top teams in the NASCAR Xfinity Series, JR Motorsports. Overall, he’ll be behind the wheel for 12 races this year before Sam Mayer takes the wheel.

Berry, who coming into this year had seven Xfinity starts, five with JR Motorsports, can only hope that his opportunity is parlayed into something even bigger. There are two ways in which it can go.

On one hand, there’s the stories of Brad Keselowski filling in for Ted Musgrave in 2007, Lake Speed in place for Davey Allison in 1993 and, Ryan Preece making the most of a four-race opportunity with Joe Gibbs Racing on the Xfinity side in 2017. For all three, those led to better opportunities for all three going forward.

On the other hand, not taking enough advantage could result in a “what if,” which is why it could be argued that Berry may be in among the more pressure-packed situations in the NXS garage right now.

Through five races in the No. 8 car, Berry has two top-10 finishes. But that hardly tells the whole story of how his season has gone.

Each time out, running well has not been the issue. Being able to avoid gremlins of bad luck, however, has been a whole other matter. At this point, Berry’s been remembered more for those than running well.

At Phoenix Raceway, a run as high as third and legitimate chance to win was derailed by late-race contact, and those frustrations were directed toward the eyesight of Santino Ferrucci by way of the universal single-finger salute.

Behind that blur is Josh Berry.

He is not a Santino Ferrucci fan today. ?? pic.twitter.com/6vSsjiDnwn

It’s hard to blame Berry for those frustrations. Winning a race in an opportunity like this can change a driver’s career trajectory – see David Gilliland at Kentucky. And knowing how capable he was to winning did not appear to be lost on Berry.

Josh Berry on his outburst on Saturday at Phoenix.

"To run as good as we did in my mind was incredible. With no practice, to run third, we legitimately had a chance to win that race. I believe that. I know that."

Combined with this as his last best shot, he was emotional." pic.twitter.com/0c5vh2RdC5

And then there was last week at Atlanta Motor Speedway, where Berry had the foul fortune of hitting an uneven transition from the apron to the AMS infield grass.

.@joshberry spins, and the No. 8 car suffers heavy damage in the @amsupdates infield. pic.twitter.com/mLfJG5GxUV

To his credit, he is gaining as much levity as possible.

Sometimes you just gotta laugh. ?Wish I had that one over again, but that’s racing. Thankful for @tirepros support of me regardless! Order up a t-shirt or grab one at Bristol. #ontothenext https://t.co/ugf5qeh3BJ

So far, Berry has run well and attracted headlines at times for the not so right reasons.

The good news for Berry is that the next time the series races, it’ll be at Martinsville Speedway. If there was ever a track built for a driver with a short-track background, the half-mile paperclip is it.

Berry has an incredible opportunity. Time will tell how much advantage he’ll be able to take of it.