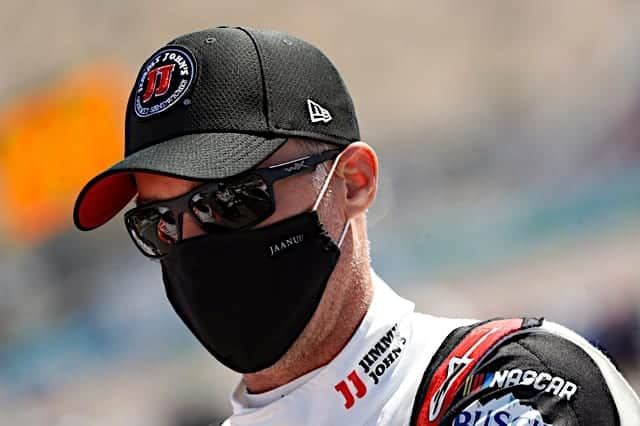 The 2021 season has been a season of parity so far. Through six races we’ve had six different winners and some you may not have guessed. There have been some surprises along the way, with perhaps the biggest surprise being that Kevin Harvick and his No. 4 Stewart-Haas Racing team have failed to lead a lap outside of the Daytona 500 this year and are way down on speed.

Since Harvick’s arrival at SHR in 2014, he hasn’t finished a season worse than eighth in the standings and has won at least two races in every season. However, the 2021 season has seen Harvick struggle even at his best racetracks. This past weekend at Atlanta Motor Speedway, the No. 4 team was way down on speed. Harvick was a lap down for most of the event.

With the unique schedule in 2021 and how bad SHR has been as a whole so far this year, we wonder: Will Kevin Harvick go winless in 2021? Vito Pugliese and Clayton Caldwell  debate.

Over the years, a few teams in the Cup Series have separated themselves as not just manufacturer standouts, but their own independent racing entities. Joe Gibbs Racing is the de facto Toyota factory team, with Hendrick Motorsports the GM stalwart, with a pair of Ford teams in Team Penske and Stewart-Haas Racing battling for top blue oval honors. Penske has always been an engineering enterprise, winning a championship when they had the only fully funded Dodge entry in the field.

Stewart-Haas similarly has been a dominant force with Kevin Harvick winning 35 races with Chevrolets and Fords since his arrival in 2014. Twenty-three of those wins have come with Ford since the switch in 2017 and 2020 was their most productive season yet with nine victories. In a sport where you’re only as good as your last finish – and every driver fears the race they just won might be their last – there’s some handwringing amongst some already that the No. 4 team has lost whatever edge they’ve had the last few years.

A less-than-stellar run at Las Vegas Motor Speedway, and a sixth-place run at Phoenix Raceway – a track where Harvick has been nothing short of dominant since 2006, winning nine times – has some freaking out that he might go winless for the first time since 2009.

Really? Nine wins one year, zero the next? I remember last year when I participated in a similar argument of will Kyle Busch NOT win in 2020. What happened?

Granted, it wasn’t until three races to go, but he still won a race before the season ended (and his crew chief abruptly quit). I understood that argument a little bit better. His teammate Denny Hamlin won seven races, and Busch wasn’t able to put together a complete weekend until Texas in the fall. This sort of doomsday prognostication for Harvick six races into the season is completely unwarranted.

Let’s take a look at the facts:

Uh, I’d take those stats to start the season, wouldn’t you?

So only one race not in the top 10, with no practice, and people are ready to throw in the towel on the most successful driver and crew chief combination since Jimmie Johnson and Chad Knaus knocked out a sleeve of Oreos and some 2%.

We see this virtually every season. There are one or two teams that hit on something trick, and they appear unbeatable the first few races. This year that’s Hendrick Motorsports – particularly Kyle Larson – and the Penske teams, though Ryan Blaney is the only one of the three who have won. Has Harvick led races only to have late-race trouble that has cost him a win? Nope! Hasn’t led a lap since the Daytona 500 actually. Joey Logano on the other hand has led almost 200 laps and won a few stages. He leads Harvick by a whopping 11 points.

People, please. We’re just over 15% of the way through the season. If a driver hasn’t led a race before the first pit stop, would you just naturally assume he has no chance of winning the event? Same situation here. Keep in mind there’s also a new car being developed for 2022, and the current car has a shelf life seven months remaining, perhaps there are efforts being focused elsewhere? With the current playoff system, they have almost half a year left to win to get in. Look at the races that are coming up next: Bristol Motor Speedway on dirt, Martinsville Speedway, Richmond Raceway, and Talladega Superspeedway. Four completely different tracks, with a career total of eight wins among them. Plenty of opportunity, absolutely no reason to suspect that he’d have no chance at victory.

If you’re asking me to bet money against a driver who rightfully earned the nickname “The Closer,” and a crew chief in Rodney Childers that if you hand to count on one hand the best of this era, you wouldn’t need your thumb, are going to go 0 for 36, then that is a wager I would happily throw down on the over.

Write it down: KFH will win multiple races this year. – Vito Pugliese

Kevin Harvick is off to an interesting start to the 2021 season. While he is sixth in the point standings, it is clear that Harvick and his No. 4 team are nowhere near the team they have been the past few seasons and I don’t see that changing. That’s why I don’t see Harvick going to victory lane in 2021.

There was an interesting article on NBCSports.com written by David Smith last week that showed just how far off in speed the team has been so far in 2021. The article states that from 2014 through 2019 the No. 4 car had been the fastest car in the Cup Series five times in those six seasons. In 2020, the team ranked fourth in speed. Through the first four races in 2021, they were down to 12th and many thought that was going to change when we headed to Atlanta Motor Speedway this past weekend. Often, Phoenix is suggested as Harvick’s best racetrack, however there can be an argument made about Atlanta Motor Speedway.

Since 2015, Harvick had never finished worse than ninth and never led less than 45 laps at the facility. In the last six races prior to Sunday, Harvick had two wins, four top fives and six top tens. He has been so good at Atlanta the last few seasons that the sport has created an adjective just for his performance there. “Harvicking” is keeping your car at the bottom of the racetrack longer than anyone and completely dominating the field with it. Harvick has done that Atlanta, coining the phrase.

With all that in mind, one would think that even though the No. 4 team had struggled with speed early in 2021, that a race at Atlanta Motor Speedway came at the perfect time for the team. Instead it turned into more of the same.

Harvick’s car was way down on speed falling a lap down for the majority of the race and saying at one point that his car was “the biggest piece of junk” he had ever driven at Atlanta. The team did manage a top-10 finish by finishing 10th, yet at a track Harvick usually dominates on, more was expected. It was another sign of just how off Stewart-Haas Racing and the No. 4 team has been so far in 2021.

According to an interview on SiriusXM NASCAR Radio a couple of weeks back, Rodney Childers, the crew chief for Harvick, stated that NASCAR had made some new rule changes in 2021 that have affected the rear wheel openings on the car. Childers claimed it has knocked down about 70 counts of downforce off the cars and that it has completely messed up the aero balance of the Stewart-Haas Racing cars.

With that knowledge, I find it extremely difficult for Kevin Harvick to win a race this season. This year NASCAR has introduced more road courses on the Cup schedule than ever before. The series will run seven points races on road courses. In his career, Harvick has just two wins in 43 starts on road courses. That means Harvick is going to have to capitalize on the tracks he’s had success on and as seen at Atlanta this past weekend, I am not sure this team can do that right now.

The lack of practice and track time in 2021 will make it harder than ever to gain on the competition. Plus, there is a parts freeze and limited wind tunnel time. All that coupled with rule changes will make it a chore for this team to find its groove.

Not to mention that the lack of speed seen from the No. 4 car in 2021 is not an isolated problem. The entire organization at Stewart-Haas Racing is lacking speed right now. According to the same article by Smith, entering Atlanta Harvick’s teammate ranked 18th, 25th and 27th in median speed in 2021. That means that the entire organization has been drastically affected by NASCAR’s rule changes and unfortunately for the team, there is not a car in the organization that is performing well that can give them a base line.

I believe with all these factors that Harvick and the No. 4 car will continue to struggle in 2021 and for those reasons he will go winless for the first time since the 2009 season. – Clayton Caldwell

we’re only 6 races into the season.

i can’t help but think that stewart is involved in so many other things, besides nascar now that is having impact on the teams. who is steering the ship?

kevin has been in cup for 20 yrs. his son is racing karts.

i think if they were halfway into the season and no wins then the question would be valid.

I agree Janice, it is premature to start asking that question. Especially since we’ve had 5 of the 6 races won by drivers that weren’t expected to win this early in the season.
Kyle Busch hasn’t won any races yet and only managed to squeak out 1 win late in the season last year. Elliott, Logano, Keselowski, Hamlin, etc haven’t won either. Should we be asking the same question about them this early in the season. Way too early.
I suppose some weeks there isn’t that much to write about, and since “the dirt race” has been covered ad nauseam, this is better than another article on Bristol.

sick of all the bristol dirt coverage.

i mean last night they had that video game racing at bristol dirt and you’d think it was a bonified actual cars on track race.

I don’t get the whole video racing thing either, but to each their own (I guess).

There is something for everybody. People bought Gremlins. There is no accounting for taste.