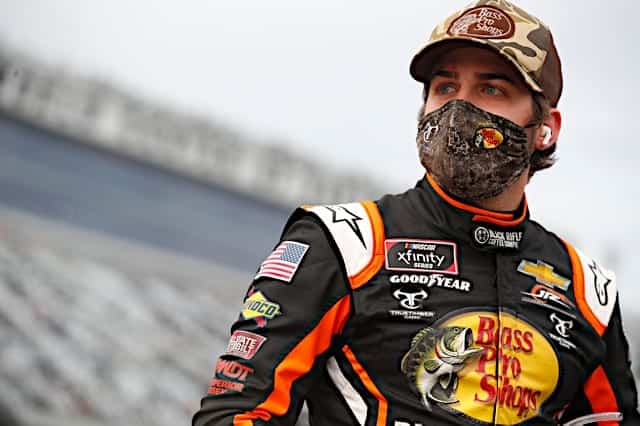 It’s that time of the month that the old-timer, long-time NASCAR writer and observer stops by to share some words of wisdom with you. While I will never get used to stage racing and having playoffs in my favorite sport, I am thrilled that not as many drivers and crew guys get hurt as back in the old day. Let’s take a look at the world of NASCAR from an old school fan perspective.

Bad Boy, Bad Boy, What You Gonna Do?

It didn’t take long for NASCAR’s biggest bad boy, Noah Gragson, to get into his first real fight of the year. While he didn’t throw the first punch in this one, he did win on points. This might be the only points title he wins in his career because trouble keeps finding him on the racetrack or he brings the grief upon himself. This time around, it was his inability to parallel park that got him into trouble, which seems so Generation Z of him. In his defense, at least he knows how to drive a stick shift car unlike many of his Z’ers, although I would bet against him knowing how to change his own tire. In today’s “Can’t We All Get Along” world, the outrage for his actions was loud on social media after his incident.

While back in the day, the “Bad Boys” of NASCAR used to get more fans defending their actions, Gragson seems to just motivate negative feels. Could you imagine if Cale Yarborough or Darrell “Jaws” Waltrip had social media when they raced? Cale didn’t care about winning fans; he only cared about winning races and dollars. Jaws used that persona to make more money off the track than he ever did on the track.

Even more flamboyant were Tim Richmond and the Intimidator himself, Dale Earnhardt. Today’s softer feeling NASCAR fans would have lost it with some of the antics by those guys back in the day. Could you imagine the Twitter uproar with Dale wrecking Terry Labonte at Bristol? I know he was just rattling his cage. Gragson deserved a fine at least for his lousy attempt at parallel parking because he put crew guys in danger, and with his reputation on the track, he would have earned that fine. But the guys wearing the black hat are always good for attendance and ratings.

So we are all left to wonder, Noah: “Bad Boy, Bad Boy, what ya gonna do next?”

It’s been 50 years since the Cup Series last got as down and dirty as they will this weekend at the Bristol Motor Speedway. Since the repave job at the Last Coliseum, the racing has gotten better but the excitement among fans has died down. Fans didn’t show up at Bristol to see side-by-side racing for the lead; they showed up to watch NASCAR’s version of bumper cars. Back in the day when NASCAR left the dirt, the concept was that only the minor leaguers raced on the dirt and that pavement was for the big boys in the sport. While fans are intrigued by racing on the dirt, back in the day the fans who followed NASCAR were more thrilled with speed than having dirt as a condiment on their hot dogs. Will this love affair with dirt wear off after a few years, or are we looking at a new tradition that might catch on just like the thrill of the Bristol Night Race brought more night time racing to NASCAR?

The last time they dumped dirt on the high banks, only the real dirt racers came to town. I was there and I still think I am finding dirt in my racing bag! You might still be able to find remnants of the dirt in the grandstands too, since there haven’t been enough bodies over recent years to make sure the seats all have to be clean. Will this be the most exciting race of the year or will this be yet another gimmick to try to improve the quality of racing to keep the fans interested? It sure won’t be boring.

NASCAR by the Numbers

Thank you Ryan Blaney for keeping my dream alive of having 36 different winners in NASCAR’s Cup division! NASCAR billed this as the “Best Season Ever” and maybe it will live up to its billing by having more different winners than ever before. Yes, I know the dream of 36 different winners will never happen. My head injury wasn’t that bad when I was 16 and I have not turned totally senile yet. But while I have no faith in Quin Houff or Anthony Alfredo making it to Victory Lane, we could have the most different winners in a modern NASCAR season, which is 19.

It would be great to see more than 16 winners in the so-called regular season because that would mess up a bunch of graphics! Why is there at least a slight chance for a record? Only one of the first six winners has won more than 10 races in their career (Martin Truex Jr, 28). Not a single one of the five drivers that won multiple races last year have won yet this season. Last year, 13 drivers won a race, but five drivers won 78% of the races.

Ten of the drivers have yet to win a race this season. so there are a lot of talented drivers who will grab a win before the season is over. Plus there are more road course races than ever and one of those could be won by a super long shot who has a great road-racing pedigree. Dare I say Josh Bilicki could pull off an upset? We also have three more superspeedway races and we already saw an upset special in the first one at Daytona. Why not Corey LaJoie pulling off an upset special this year, too? We also have this week’s race at Bristol on the dirt ,which could bring us another wild upset special. While many of these upset specials sound crazy, the odds of the first two races being won by first-time winners were very long too!

Strap in tight this weekend because unlike last week at Atlanta Motor Speedway, where the action seemed to disappear until the end, racing on the dirt at Bristol shouldn’t offer a single dull moment. If you want to feel like you are there, roll around in the dirt and sprinkle some lightly on your hot dog and popcorn and it will almost feel like you are there at the Last Great Colosseum.

One good thing about the event at Bristol is that they won’t destroy a real dirt track After seeing what 200 laps by the DIRT Big-Block Modifieds does to the Syracuse Mile, Bristol will not be pretty.

Heck it has already had a thousand laps put in on it in the last week.It will be just like a rubbered over dirt track just before it rains.The crews are what I worry about. Wild and wooly pit entry.Guys cutting parts off cars.You know those front airdams will be gone fast.No one but dirt racers used to rough tracks.It will get holes.Just hope no one gets run over.Then an untested tire doing all those laps!