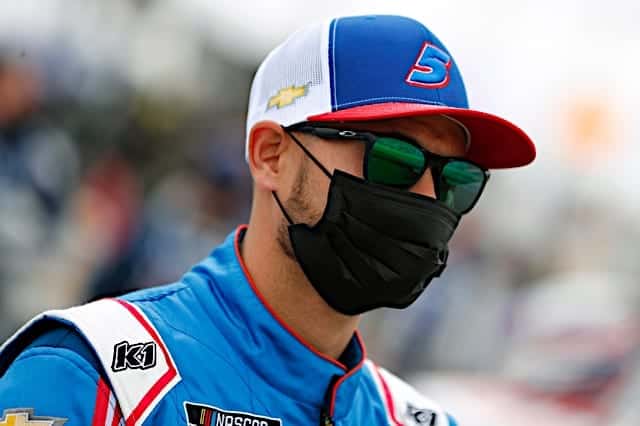 This weekend’s 44-truck entry list for the NASCAR Camping World Truck Series’ inaugural race on the Bristol Motor Speedway dirt track is a little over 15% NASCAR Cup Series driver, with seven competitors who run full time in Cup dropping down to run the Truck race the night before.

The dominance of the Cup interloper is a tale told often in the Xfinity and Truck series, particularly in the late 2000s and early 2010s. More recently, the preponderance of such racers has died down thanks in part to restrictive policies on how many events an upper series regular can enter in a season.

With seven potentially starting in the 40-truck field once the heat races have set the lineup, smart money would probably place a Cup guy in victory lane by the end of Saturday night.

Which one of them will it be?

Yeah, this is going to be that kind of column. Apologies in advance.

There’s a good chance this is an exceedingly dumb position to take, too. The seven-driver Cup squad includes Kyle Larson, one of the best dirt racers in recent memory, NASCAR or not. It’s got more than one previous winner of the Eldora Speedway Truck Series race that served as the circuit’s introduction to dirt from 2013 to 2019. Like, the outcome is clear, right? The win’s totally gonna be stolen by a Cup driver. Which doesn’t make it a bad race! It’s just the way the cookie crumbled.

Key word being totally. Because there’s a case to be made for a lot of them.

First, Larson. Chili Bowl Nationals winner the last two times running. Regularly wins at dirt tracks across the world in between his NASCAR racing exploits. He’s even a past victor at Eldora in Trucks, snagging the 2016 edition for GMS Racing.

But Larson is also racing for Niece Motorsports, a team that’s seen fleeting success in the Truck Series (see: Ross Chastain‘s run to the Championship 4 in 2019) but has also performed below expectations (see: the entire 2020 season) to the point where it’s still not completely clear what level of competitor the four-truck team is.

That unpredictability may work in Larson’s favor — hey, Bobby Pierce used to take an MB Motorsports truck to near-victory lane experiences, and the Mittler Brothers team’s equipment was generally worse than Niece’s — but it’s also cause enough for hesitation.

Consider the unknowns of it all, too. NASCAR’s sticking 40 trucks on the Bristol surface, eight to 10 more than would generally run the Eldora feature. It’s an unprecedented situation, having 40 of these big-bodied trucks out on a new-to-the-trucks-themselves dirt course. By Knoxville Raceway later this year, a lot of those unknowns will probably be answered. But until then, that’s the slightest of strikes against Larson — just as it is for anyone else. And why it’s more important for Larson than anyone else in the field is that it potentially makes him even more human, at least right off the bat. And who knows what kind of carnage could be coming for the field early on in the race.

Larson also hasn’t set foot in a truck since the 2016 season finale at Homestead-Miami Speedway. Practice and heat races will certainly help him get acclimated to the truck again — as will the sheer fact that Larson has pretty much driven the wheels off anything he’s ever raced. But one has to wonder if four-plus years away from this particular racing disposition might hurt him, at least at first.

Chase Briscoe doesn’t have the last problem as much. In addition to his 2017 rookie campaign in the series for Brad Keselowski Racing, he also drove one start each in 2018 and 2019 for ThorSport Racing, both times at Eldora. He won one of them (2018) and led 93 laps in the other (2019) before settling for seventh.

ThorSport, however, is not Roper Racing Team. Heck, BKR isn’t Roper (well, kind of, because Roper got some of the BKR trucks when it closed down, but you know what I mean). Briscoe is fairly untested in equipment that’s not considered among the best in his respective series.

That isn’t to take too much away from Roper’s No. 04, which nearly won Daytona International Speedway to kick off 2021 with owner Cory Roper. The No. 04 has certainly come down to earth in the races since, though, and at the very least is not going to provide the horsepower Briscoe was used to his three times out at Eldora.

Then there’s Bubba Wallace, who was Eldora’s second Truck winner in 2014 and its first victor who was a series regular at the time of his win.

Wallace’s pluses include that previous win as well as some slightly more recent experience in the Truck Series, boasting a pair of 2019 starts for AM Racing. And while he’s driving for Spencer Davis Motorsports, a fledgling team that has shown speed but, sort of like the aforementioned Roper, is generally more than thrilled with a top 10, the No. 11 is being prepared by Hattori Racing Enterprises, which fields the No. 16 for Austin Hill full time — a definite step up in equipment.

His minuses? Chiefly that he hasn’t ran a truck on dirt since that win. His sporadic series starts since have always come on asphalt, and unlike Larson, Wallace isn’t the guy you hear about tearing up dirt tracks the world over in his spare time. He wasn’t known as a dirt ace in 2014 either, sure, but his diminished dirt experience in recent years makes him tough to choose as a runaway favorite.

Ryan Newman‘s back, though! Surely he’s a shoo-in frontrunner, right?

Maybe. But Newman’s also one of the biggest unknowns of the entire field, not just of the Cup folks. Not because he doesn’t have as much recent dirt experience but because his team is brand new.

Newman’s driving the No. 39 for a team that seems to be called Diversified Custom Concepts, or perhaps that’s just the sponsor, maybe both! Either way, it’s definitely owned by Brad Means, Xfinity Series owner Jimmy Means’ son and a two-time DNQ in the Truck Series in the ’90s.

There’s really no indication of how a Brad Means-owned truck will compete. Will it be up to what Newman’s generally used to at his day job at Roush Fenway Racing? Maybe. Will it tend more toward the Jimmy Means Racing efforts in the Xfinity Series? Maybe. It’s going to be hard to know for sure until the trucks hit the track for practice Friday.

Give Newman a little credit in that he has raced in the series on dirt before, finishing third in the inaugural Eldora event, and he’s even got experience in more underfunded equipment at Eldora, running the 2018 edition for Jordan Anderson Racing. But until we see what’s under the hood of that No. 39 — and with the possibility of missing the race present with four trucks going home after the heat races — it’s best to tread lightly.

And then there’s the other three. Daniel Suarez, Kevin Harvick and Martin Truex Jr. Despite their standing as Cup regulars (the latter two as Cup champions, no less), it’s difficult to anticipate them as bona fide contenders Saturday. None of them ran the Eldora Truck race, and Suarez was the last of the bunch to even start a Truck race — in 2016. They’re here for one thing: to gain experience for the Cup race the next day.

(Watch that flippant paragraph come back to haunt my dreams or waking nightmares when one of them wins. Whatever, I fear nothing.)

So who does that leave? The rest of the field?

Well, yes. And there are some heavy hitters among them.

Grant Enfinger, for example, never won at Eldora but scored three top fives in his three starts while driving for ThorSport, the team for which he’s driving this weekend, too.

Mike Marlar was a surprise contender at the final Eldora race in 2019 for Reaume Brothers Racing. He’s now in contention with Hill Motorsports, arguably a step up in equipment — which means his fourth-place run with RBR could translate into something more this year.

Matt Crafton? Of course he’s still around, and he’s got the 2017 Eldora win to his name while never finishing outside the top 10 in his seven starts there.

And it’s incredibly difficult to count out Stewart Friesen, the 2019 Eldora winner and someone who finished top three in each of the final three Eldora Truck events.

So don’t take a look at this weekend’s entry list and discount it as a formidable race and instead as a preview of what’s to come in Cup’s return to dirt the next day. Big guns like Larson are entered, yes. Might win, too.

But the Cup regulars have quite the adversaries in the Truck drivers, full- and part-time. Some of them have even won at Eldora in years where it seemed like the race was all but in the bag for a Cup guy or dirt star.

I’m going with Stewart Friesen, for what it’s worth. Marlar’s a dark horse. Heck, Nemechek’s got a Kyle Busch Motorsports truck this time instead of the Nemco Motorsports machine he usually piloted at Eldora. Gotta count for something.