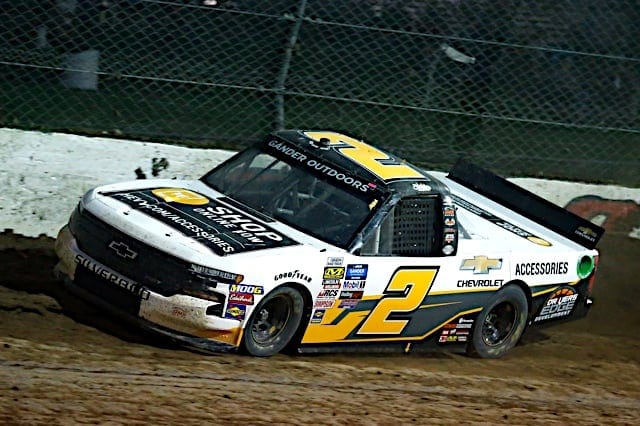 This weekend, the Camping World Truck Series heads to Bristol Motor Speedway, but this time, it’s for a complete unknown. Instead of the traditional 0.533-mile concrete surface, officials have trucked in “23,000 cubic yards of dirt,” according to Speedway Motorsports, Inc. vice president of operations and development Steve Swift.

From 2013 through 2019, the Truck Series ran the Eldora Dirt Derby at Eldora Speedway, but the 2020 version of that race was canceled due to the COVID-19 pandemic. Then, last November, Eldora confirmed NASCAR would not return to the track for the 2021 season.

“We had a great seven-year run that ushered in many firsts for NASCAR, namely heat races, last chance qualifiers, four-wide salutes and stage racing,” Eldora Speedway general manager Roger Slack wrote in a letter to fans. “Rising stars and dirt-racing specialists ensured we never had a repeat winner and that all winners came from various racing backgrounds, from dirt and asphalt to open wheel and stock cars.”

When NASCAR revealed the 2021 schedule, the Bristol dirt race weekend was born. The speedway announced Wednesday (March 24) that its grandstand capacity for the race has been sold out, though there are some tickets remaining for Friday’s practice sessions.

“There has been so much fan excitement generated around the Food City Dirt Race weekend and as of late last night we reached our socially-distant grandstand capacity for Saturday’s Pinty’s Truck Race on Dirt and Bush’s Beans Qualifying,” Jerry Caldwell, executive vice president and general manager for Bristol Motor Speedway said. “We appreciate our fans and community for always being by our side and we look forward to serving up some incredible WOW moments and memories this weekend with some thrilling dirt racing action, NASCAR-style.”

It’s fascinating just how the track surface was set up. As referenced above, more than 23,000 cubic yards of dirt were trucked in, and the process wasn’t a knee-jerk throw a bunch of dirt on the surface kind of thing. It took about three months of planning, research and consulting with dirt track experts, a process that began back in January.

“We started out placing sawdust on the track,” Swift explained. “The reason we do that is to make sure that when we clean the track up we have a way to get it off without staining the concrete and get the track ready for the Night Race in September. It also helps with the cleanup.”

Fill dirt that had previously been used in the early 2000s was stored in a facility a few miles from Bristol was placed before the rest of the racing surface, a dirt called “Bluff City Clay,” was put down.

“There is a lot of science to dirt racing and the type of dirt that you race on,” Swift said. “We had to look for different types of dirt, there’s a lot of red clay in the area, but there’s good red clay and bad red clay. We’ve talked with a lot of experts, to people who know a lot more about dirt than anyone would ever want to know about dirt.

“We took samples and sent them off to have them tested and found the right mixture. Once we found the right dirt it was a matter of how to get it to the site in a timely manner. We found enough to cover the track and to have a great racing surface.”

The timelapse transformation of the bullring is pretty fascinating.

(Author’s Note: For the full story about how the racing surface came together, click here.)

As far as the race itself, the field will be set in a similar way it was when the Truck Series raced at Eldora. A series of heat races will determine that starting lineup, however, it’ll be a little more complex than just utilizing the finishing order.

Four qualifying races at 15 laps apiece will be run, the lineups of which will be determined by a random draw. Caution laps during the qualifying races will not count. Once those races are completed, NASCAR will use the finishing order to reward points related to finishing position with the winner of the heat receiving 10, second place receiving nine and so on down to 10th. Drivers will also be given points for each position gained throughout their heat. Those points will only be used for the starting lineup – not for the championship standings – and any ties will be broken via owner points.

With 44 drivers currently on the entry list, four will miss the race in the field of 40. There will be five positions set based on owner points, while the top 35 will be determined by the qualifying races.

NASCAR will not utilize the choose rule for this race, though things like the free pass, overtime and wave around will still be options for teams. The three stages will end at laps 40, 90 and 150, and under each stage break, the field will be frozen for pit stops. Changing tires or adding fuel will not be permitted outside of stage breaks without NASCAR’s approval. The field will line up the way it was frozen at the end of the stage, though those who opt not to pit under the stage break will restart ahead of those that do.

Regardless of how you feel about NASCAR utilizing Bristol for a dirt race instead of visiting a ready for racing dirt track, the unknowns that Saturday’s event bring, along with the prior excitement that surrounded racing at Eldora are enough to make this a must-watch race.

Naturally, drivers who have an extensive dirt racing background have to be looked at as favorites for the race, along with those who have excelled at Eldora previously. But it’s far from a guarantee since everyone will get a pair of practice sessions ahead of the heat races.

When the checkered flag flies Saturday evening, one driver will walk away as the inaugural winner of the Pinty’s Truck Race on Dirt, and we should, in theory, have a better understanding of who to watch when the series heads to Knoxville Raceway in July for its second dirt track race of the season.

RETWEET if you're ready to go truckin' with us this spring with the #LiftKits4Less200 ?