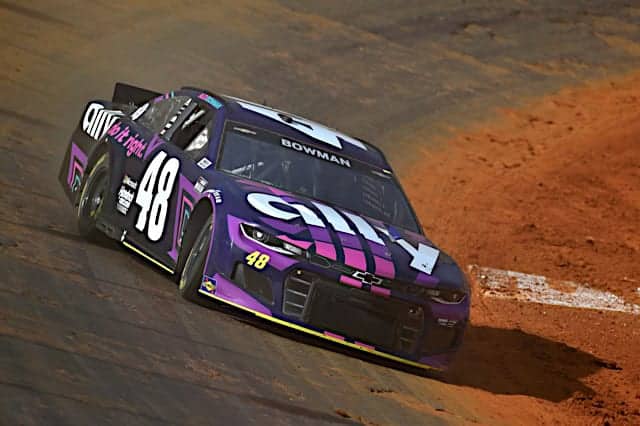 Bowman completed 42 laps in the opening practice session but his first lap became the fastest one in the field at 89.308 mph.

A trio of Joe Gibbs Racing drivers were second through fourth fastest in this session with Christopher Bell, Kyle Busch, and Denny Hamlin, respectively.

Blaney wheeled his No. 12 Team Penske to the top of the leaderboard in the final practice session with a top speed of 89.233 mph.

Bowman showcased the speed in his No. 48 Hendrick Motorsports Chevrolet as he was also second-quickest in this session.

Hamlin was third-fastest, the second driver to be in the top five in both practice sessions.

Joey Logano and rookie Chase Briscoe, who is also competing in both races at the Bristol Motor Speedway dirt track, rounded out the top five.

During this session, Hendrick Motorsports changed the engine on Larson’s No. 5. As a result, he will have to drop to the rear of the field before the race begins on Sunday.

The Cup Series will return to the track tomorrow for its four qualifying races. Those are slated to begin at 6 p.m. ET with FOX Sports 1 broadcasting all of those. The Food City Dirt Race will then take place on Sunday at 3:30 p.m. ET with TV coverage provided by FOX.

The track looked like it was breaking up in really big chunks. Wait til they run the 250.

I expected the dirt to be thicker. The main groove was concrete with a thin layer of mud over it. You could still see the seems between the concrete. The dirt seemed to be concentrated at the top and on the very bottom. Not what I expected at all.

Gary
Reply to  Bill B

The dirt is 8 feet deep in the middle and 1 foot deep minimum at the top. You are not seeing concrete. Yes, the dirt has come up a little. Have to expect that from 39, 3400 pound stock cars. What I dont understand is why Goodyear didn’t do a tire test.

Bill B
Reply to  Gary

So in the picture of Alex Bowman at the top of this article, there is a foot of dirt underneath his car?
What an optical illusion. I guess it must be packed so hard that it no longer looks like the orange-reddish dirt on the bottom.
Thanks for the clarification.

Gary Wayne
Reply to  Bill B

Watch for yourself and see how you interpret it.
https://www.bristolmotorspeedway.com/handler.cfm/template,video/cat_id,57842/?med_id=1922459

Bill B
Reply to  Gary Wayne

Thanks for the video.
And yes, it does sound like it is as you said it was.

I am sure when I watch the race today (or more likely tonight or tomorrow with all the rain) they will talk about it in greater detail.

As much as I anticipated this race, I’m afraid after this weather fiasco, this will be a one and done for Bristol. And to think they have another event scheduled later in April for the World of Outlaw series!
.