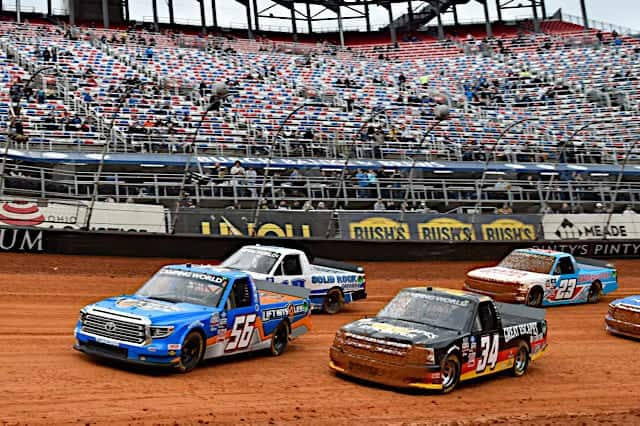 Turns out NASCAR’s Air Titans were no match for some mud-infested dirt after rain poured down on Bristol Motor Speedway’s new surface Saturday (March 27).

With a storm system continuing to move through the area, all on-track action, including the heat races for the Truck and Cup Series, have been cancelled. The Bristol Dirt Truck race was scheduled to go green at 8 p.m. ET on FOX Sports 1.

The rain has won today. We will see you tomorrow for dirt racing in Bristol! pic.twitter.com/MVHOFkJmrV

Instead, the trucks will return to the track at 9 p.m. ET on Sunday night, their TV coverage moved to FOX Sports 2 after the Cup stars run the Food City Dirt Race beginning at 3:30 p.m. ET on FOX.

Drivers from both the Truck and Cup series, which featured notorious dirt track ringers, were looking to set the field in four 15-lap heat races Saturday night. The trucks took the track around 5:30 p.m. before a red flag flew quickly due to visibility issues.

This will be an epic fail on NASCAR’s part. They should have scheduled a 3 race dirt weekend. The rules would be simple, no rules except for the engines. The NASCAR teams could’ve come up with some cool designs. Perhaps as cool as Charlie Swartz’s wedge car at Pennsboro back in 1982. Race 1 at Eldora an open race where all dirt drivers could try to get into on a Friday then on to Pennsylvania motor speedway for a cup race featuring NASCAR drivers only and ditto for the final race on Sunday at Hagerstown MD speedway. I can not understand why NASCAR has road course cars, short track and super speed way cars but somehow thought regular cup and truck cars could put on a good show on dirt. Let the crew chiefs go to work fabricating cool dirt cars and quit infuriating the Dirt Gods !!!

The NA$CAR brain trust, using the term very loosely, have been infuriating the Rain Gods since 2004.

No race today so I started googling. Richard Petty, 83 received an inoculation and recommended it to racefans and their families.
Richard Petty, ALWAYS a Champion! ?