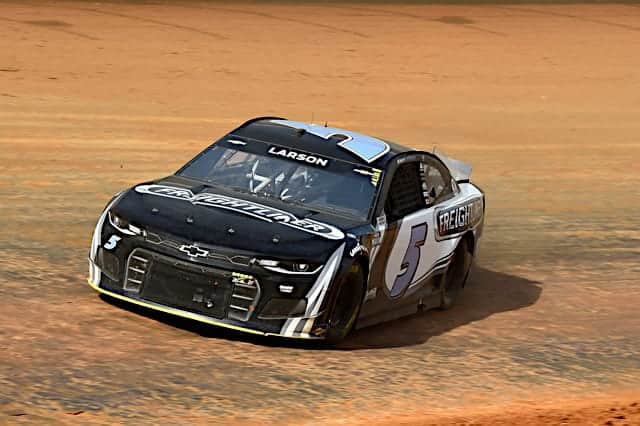 The starting lineup for both the NASCAR Cup and Camping World Truck series have been announced following the postponement of tonight’s truck race (March 27) and the cancellation of both heat races at Bristol Motor Speedway.

The lineups are now calculated using the performance metrics formula for each division.

For the Cup Series race tomorrow at 3:30 p.m. ET, Kyle Larson will officially capture the pole position. However, he’ll start at the rear of the field due to an engine change during Friday’s two practice sessions. Denny Hamlin, Ryan Blaney, Kyle Busch and Martin Truex Jr. round out the top-five starters.

Making headlines this weekend are numerous drivers making their Cup debut thanks to their experience on dirt. This group includes USAC Midget champion Chris Windom in the Rick Ware Racing No. 15 Chevrolet; 2018 World Of Outlaws champion Mike Marlar in the MBM Motorsports No. 66 Toyota; and Matt Wood Racing’s Shane Golobic in the Live Fast Motorsports No. 78 Ford.

Stewart Friesen, a regular contender in the NASCAR Camping World Truck Series and longtime dirt track veteran, is also in the field making his Cup debut. Friesen will begin the race 32nd, Golobic will take the green 35th, Windom starts 36th while Marlar will start 38th.

Ty Dillon will bring up the rear of the field in 39th position, making a Cup start as part of his limited schedule with the No. 96 of Gaunt Brothers Racing.

In Truck Series competition, multiple drivers hoped for a happier ending in the heat races, including Jessica Friesen, Stewart Friesen’s wife; Trevor Collins; Cup regular Ryan Newman; and dirt modified ace JR Heffner, who withdrew from the race earlier today. None of the aforementioned qualified for tomorrow night’s race after the starting lineup was released following the same formula.

Up front, John Hunter Nemechek will start from the pole in the truck event with Austin Hill in second. In third will be Sheldon Creed, with Matt Crafton starting fourth and Johnny Sauter fifth.

Take out Norm Benning and put in Jessica.