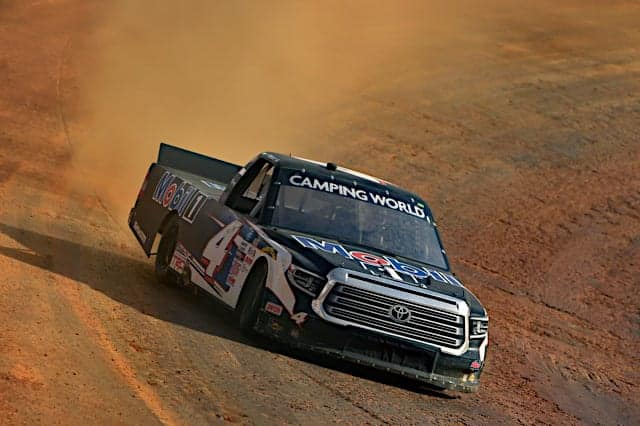 Bristol Dirt? Mother Nature doesn’t care, as she didn’t let up on Bristol Motor Speedway over a March 27-28 weekend filled with rain.

Constant precipitation from Saturday afternoon into Sunday ultimately forced the postponement of the NASCAR Cup Series and Camping World Truck Series’ Bristol dirt races. Drivers will have to wait another day before attempting the first Cup race on this track type since 1970.

The Trucks are waiting it out, too, as the Pinty’s Truck Race on Dirt was pushed from its original 8 p.m. ET start time on Saturday to 9 p.m. ET the following day. Now, they will take the green flag shortly after noon ET on Monday (March 29). The Cup Series’ 250-lap Food City Dirt Race, meanwhile, is set for 4 p.m. ET that afternoon. It will be the first time in more than 50 years that NASCAR’s premier series has raced on dirt.

Despite beautiful, sunny skies on Friday for Cup and Truck practices, ominous clouds and eventually rain moved in and swept away both series’ heat races that were scheduled for Saturday afternoon. The heavy rain, combined with lengthy track prep and flash flood warnings for the area, ended up forcing NASCAR’s hand and the postponement of all Bristol dirt track activity.

I have NEVER seen the water this high before at @BMSupdates #NASCAR pic.twitter.com/gbTupU0B0i

The last time a race at Bristol was postponed to Monday was in 2018, where Kyle Busch went to victory lane the day after a Sunday rainout.

Kyle Larson is set to lead the Cup field to green after the lineup was set through the sport’s qualifying metric. However, the No. 5 team changed the engine in their Chevrolet after Friday’s practice and he will drop to the rear.

John Hunter Nemechek is slated for the Truck Series pole, but is on baby watch with Cup driver Christopher Bell on standby to relieve him.

The whole thing is shaping up to be a catastrophe in the making.
Track coming apart, tires not holding up, rain, too muddy for qualifying, etc., demonstrating just how half-assed this race was thought out. It sounds like the plans were to figure out how to mitigate any issues they encountered as they went along. Well the issues are mounting up.

If this were on the normal Bristol concrete we’d probably be seeing a race tonight. The rain has stopped and they have a way to dry concrete. Dirt, not so much.
A million rolls of Bounty?

Good idea, until a 100 year rain came to town

Goofy idea all the way around.

Run the Cup bumper cars at noon and try to get the Truck event in after the Cup event has destroyed the track.

If nascar wanted to race on dirt why dont they go to a dirt track and do it. Why take a concrete track and put dirt on it and try to race on that. The cars are to heavy for this kind of track. If the cars would race at a true dirt track like eldora it might be a good race but nascar doesnt want to pay tony stewart for the privilege to host a race at his track. All about money. Not surprising

Totally agree. This is a stupid idea. Bristol is a great concrete short track. So, in effect, NASCAR has removed a legitimate short-track for an experiment which appears doomed to fail.

Absolutely! I agree with all of the comments made by others. Stupid idea and obviously very little thought on how this would work and guess what – it doesn’t!

Could have raced at a real dirt track, such as Eldora.

It’s funny, less than 20 years ago none of these people or TV broadcasters ever heard of the great racing going on at Eldora since 1954. I’ve been going there since the seventies, but Knoxville is even a better dirt track. Cup cars look stupid on dirt.