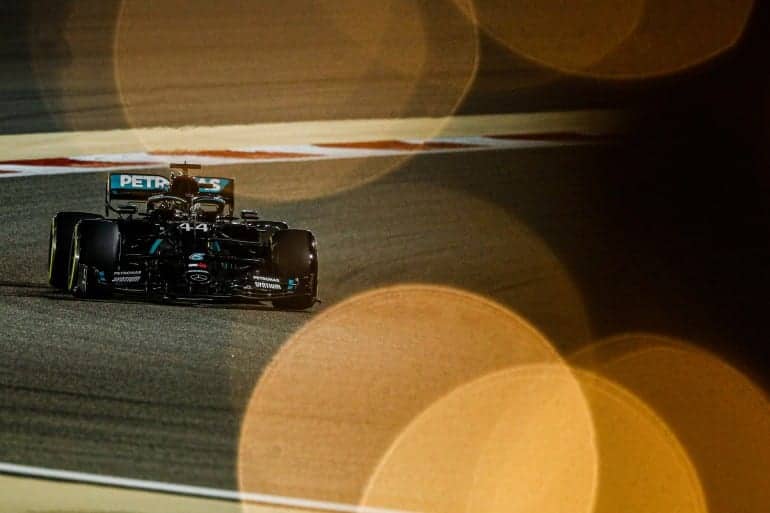 Sir Lewis Hamilton prevailed in a clean battle with Max Verstappen in the Bahrain Grand Prix (Sunday, Mar 28).  Hamilton earned his 95th win and kicked off the 2021 season with a win in his chase for an eighth championship.

Verstappen appeared to have the advantage throughout the race, as his Red Bull consistently showed more speed.  With 12 laps remaining, Verstappen chased Hamilton down, closing a gap of over five seconds.

Verstappen made the pass on Hamilton with three laps to go but did so by exceeding the track limits and gaining a lasting and definitive advantage.  Under those circumstances, Verstappen was forced to give the position back to Hamilton.

Though Verstappen still had time to recover and overtake Hamilton again, he never found the opportunity.  Hamilton covered Verstappen with just enough gap to take the checkered flag and open a season that will likely see the two drivers contending for the win at every track.

Hamilton’s teammate, Valtteri Bottas came to the finish in third.  His day was marred by a slow pit stop when his crew struggled to remove the front right wheel.  The extra eight seconds in the pit dropped him into a space where he could do nothing.

Bottas did earn the fastest lap point by being brought in on the penultimate lap and putting on new tyres.

Lando Norris made a cracking start at the beginning of the race and used it to finish in fourth.  The McLaren driver continues to assert himself as someone to watch who may start nabbing podiums and soon a race win should McLaren position itself correctly.

Sergio Perez started the race from pit lane after a glitch shut down his Red Bull during the formation lap.  While Red Bull may have made an error in its strategy with Verstappen and failing to get him out front, the team was brilliant with Perez, stealing his way through the field and allowing him to use the car’s pace to retrieve an excellent finish.

Charles Leclerc made a stellar start but his Ferrari struggled over the long run, burning the rear tyres off in a similar way that the car did last year.  The difference this year is that Ferrari’s pace looks much better and the tyres held on longer.  Leclerc wound up sixth for his effort.

Daniel Ricciardo’s first foray for McLaren led to a seventh-place finish.  Ricciardo had a quiet and steady day and brought home valuable points for the team.

Carlos Sainz helped Ferrari to a strong start to the season by earning eighth.  Last year, Ferrari struggled mightily to place both cars in the points, yet the team was able to do so in the inaugural event of 2021.

Yuki Tsunoda may be the surprise of the day.  The F1 rookie scored points in his debut for Alpha Tauri with his ninth-place finish.  Starting 13th, Tsunoda hovered in the early teens for much of the race but was able to pick off drivers in the final stint.

Lance Stroll rounded out the top ten by nabbing a point for the newly-minted Aston Martin team.  The points-paying position is an important start for the team as it is struggling to adjust the car to the new rules that the team principal has argued have affected them more than others.

Hamilton’s victory kicks off his 2021 with a veritable throwing down of the gauntlet that Verstappen is sure to be addressed.

As. much as it pains me gotta give kudos to Lewis. When Max ran him down and passed him I thought it was over, was shocked to see Max go from pulling away to being passed. Credit where credit is due I guess.

I am thinking the same thing, very painful. An incredible race by the seven time champion.