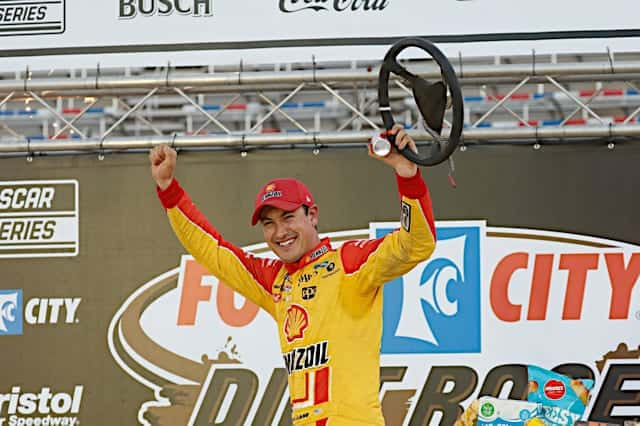 Scenes of flooded parking lots and heavy rain gave way to sunny skies on Monday, allowing the NASCAR Cup Series to take to a dirt track for the first time in more than 50 years.

It also gave way to Joey Logano, who carved his way through the dirt to win his first race of 2021. Logano’s car came to life in the back half of the race, possibly having learned some things after broadcasting the Camping World Truck Series event earlier in the day.

The dirt was plenty packed down in the wake of the Truck Series race, which kicked off at noon and ran until just past 2 p.m. Martin Truex Jr. won that event and looked to be in good shape for the first half of the Cup race, leading more than 100 laps.

Non-dirt racers, or at least those with less experience on dirt, seemed to have an advantage. It helped their case that dirt stars like Kyle Larson and Christopher Bell were taken out early, but more unexpected names made up the front-runners for most of the afternoon.

It was by no means a clean running in terms of the environment or the race itself, with multi-car incidents bringing out caution after caution.

The red flag flew on lap 41 when Stewart Friesen pinched Aric Almirola on a turn exit, sending the latter around and directly into harm’s way. Shane Golobic piled into the back of the No. 10, followed by Anthony Alfredo and Corey LaJoie each smashing into the front of Almirola’s car in turn. The melee happened directly in front of and within feet of leader Truex, who narrowly missed Alfredo’s disabled car and was nearly rear-ended by Quin Houff.

The red flag is out after a big crash at the Bristol Dirt Track. https://t.co/vX3wLq74Ah pic.twitter.com/kTMQ4lOFsv

Ryan Newman spun a few laps later, causing Kevin Harvick to take evasive action … right into Stewart-Haas Racing teammate Chase Briscoe. All three cars were able to continue, but being sandwiched between Harvick’s car and the wall sent the front of Briscoe’s No. 14 up into the air.

Not even 10 laps later, Christopher Bell spun and collected fellow dirt veteran Larson, as well as Ross Chastain. Larson was able to continue but was essentially taken out of contention while Bell and Chastain went to the garage, ending the day for several of the pre-race favorites.

Trouble for two of today's favorites to win. Christopher Bell goes around and Kyle Larson has nowhere to go. pic.twitter.com/nhKfNCSawx

Larson’s day of incidents wasn’t done, though, when he, Alex Bowman, Ryan Blaney and Michael McDowell found themselves facing all the wrong way on the frontstretch on lap 153. Kyle Busch also suffered damage.

Before that, though, someone had dethroned Truex from the top spot: Suarez.

Suarez lightly tapped Truex’s rear bumper after hunting the No. 19 for a handful of laps, the polite greeting sending Truex ever so slightly out of the groove and allowing Suarez to slip past.

Suarez then set sail, retaining his position out front until there were less than 10 circuits left in stage 2.

After the last multi-car crash, NASCAR elected to use single-file restarts for the remainder of the race. It benefited Suarez the first time around, but after a caution for Cody Ware, it bit the No. 99 team. Suarez battled hard with Logano for several laps before settling into second, only able to watch as Logano won the second stage.

NASCAR then paused the race for around 15 minutes so teams could work on the track and improve it for the final 50-lap sprint to the checkered flag. During this pause, it was announced that the Cup Series would return to the dirt at Bristol in 2022.

Logano gapped the field on the restart but Denny Hamlin quickly closed back in, contact between the two nearly sending both spinning. Suarez dueled with Truex for second as more battles raged throughout the top 10, but it was the battle for the lead between Hamlin and Logano that was the showcase.

The two dueled for several consecutive laps before Hamlin, for the moment, settled into second. Wallace’s bid for a top-10 finish, where he had been running for a majority of the race, evaporated with a flat tire with less than 40 laps to go. Contact with Ricky Stenhouse Jr. cut the left-rear tire down, forcing the No. 23 to pit road and putting him two laps down.

With 25 laps to go, though, Hamlin began to close as Logano encountered lapped traffic.

One more caution flag flew for Mike Marlar spinning, though, and set up one final restart.

Logano used the single-file lineup to his advantage, getting ahead of Hamlin and a charging Ricky Stenhouse Jr.

“It was definitely a challenge,” Logano said after the race. “When they watered the track the last stage, that kind of changed everything and Denny and I had a heck of a race. He found grip up top and I was like, ‘well, I don’t know how to do that,’ so I had to go up there and find that out to defend the lead position. And eventually just worked the lapped cars, that was very hard as well — as it should be … was able to get through them as needed and, of course, the late-race caution.

“Team Penske really put together some really good cars to come here and wing it,” he added. “That’s what this is about. Nobody really knew what to put in the car, and we were able to adjust the right way throughout practice and get it into victory lane. It’s great.”

The Cup Series gets a week off before heading to another short track, this time to Martinsville Speedway on Saturday, April 10. The second-ever night race at the paperclip-shaped track is set for a 7:30 p.m. start time, with coverage on FS1. Truex is the defending winner of the night race, while Elliott went to victory lane there last fall.

What a pathetic, made-for-TV spectacle.

Right on the money. What a joke Nascar has become. There is no real racing anymore. It’s like the WWE made for TV and that is.

What great fun that was to watch.

They kind of lost me when they, all of a sudden, just announced, in the middle of the race, that there would be single file restarts. Personally, I’d prefer single file restarts at all the races, but to just change the rules of the race like that made the whole thing a farce. Imagine the NFL saying there would be a 5th down when the 4th quarter started. It just undermines the legitimacy of the whole race and sport.