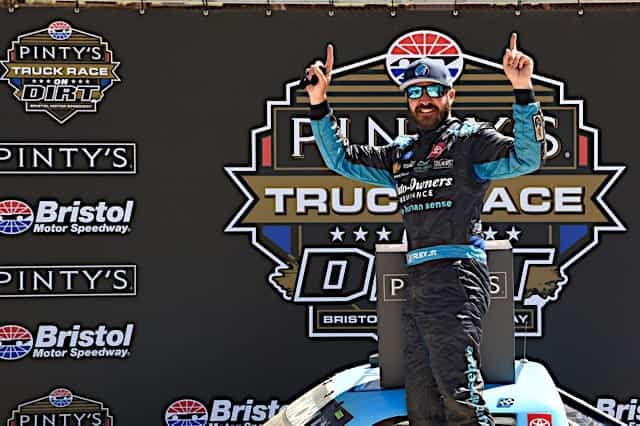 While the NASCAR Cup Series returns to dirt for the first time in over 50 years, the NASCAR Camping World Truck Series made its debut on the Bristol Motor Speedway dirt track after seven seasons of racing at Eldora Speedway.

Though many drivers in the Pinty’s Truck Race on Dirt had experience from the ARCA Menards Series, Eldora races or are purebred dirt racers, Martin Truex Jr. was not one of them. But it was Truex who rolled into victory lane at Bristol in the No. 51 for Kyle Busch Motorsports.

The inaugural Bristol dirt race was the first time Truex had been in a truck since 2006.

Not only did the Mayetta, N.J.,  native have a strong day, but he also followed Busch’s dominant performance last weekend at Atlanta Motor Speedway with one of his own.

Truex took the lead from Sheldon Creed in a one-lap shootout to end stage 1 and earn the stage victory. He never looked back after that, sweeping the stages and leading 105 laps in route to his first Truck victory.

“It’s unbelievable, really,” Truex told Fox Sports 1 following his win. “I guess they had to put dirt on Bristol to get me back in victory lane here. It’s been a long time. That was a blast, I’m still really surprised. I wanted to run this race so I could get more experience for the Cup car.”

Ben Rhodes scored Toyota a 1-2 finish by coming home in the runner-up spot. The winner of the season’s first two races ran in the top five for most of the afternoon and even closed in a little on the No. 51. It was too little, too late, however, as the No. 99 ThorSport Racing truck finished as the bridesmaid.

Truex and Briscoe led the way out of six Cup regulars who were in the race.

Kyle Larson was one of the pre-race favorites behind the wheel of the No. 44 Niece Motorsports entry. That all came crashing down when Larson was involved in a hard crash on Lap 99.

The race featured 12 cautions for 56 laps, with 11 lead changes among six drivers.

The NASCAR Camping World Truck Series returns on April 17 at Richmond Raceway. Coverage is scheduled to start at 1:30 p.m. on FS1.

This dirt race dirtier than yo momma!! I love this racin!!!! We need more of these.

Hopin my homie Billy Byron gets a win here!!