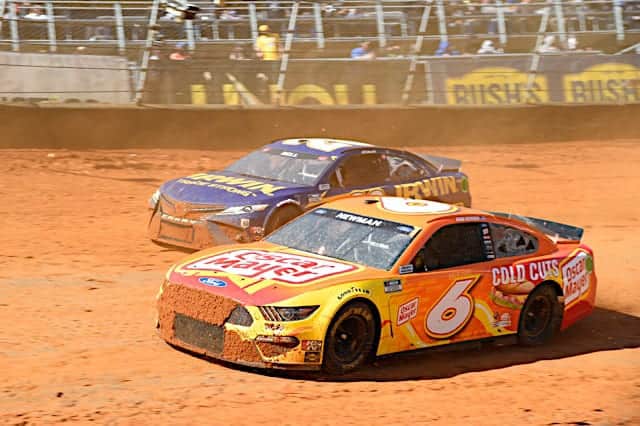 The struggles for Ryan Newman in the past year and a half have been plentiful, but the Rocket Man finally looked like his old self in the Bristol Motor Speedway dirt race.

Newman finished fifth on Monday, March 29, scoring his first top five since losing to Ryan Blaney by .007 seconds at Talladega Superspeedway in the fall 2019 race.

“Proud of our guys,” Newman told FOX Sports. “Our best team effort, like you said, all year, and it’s still early in the year.”

A couple months after that Talladega runner-up, Newman wrecked just a hundred or so yards shy of winning the Daytona 500. The wreck nearly claimed Newman’s life, giving him a brain injury and keeping him out of the No. 6 Ford for the next three races before COVID-19 shut down NASCAR for two months.

When Newman returned to the seat, the results were not there. In 2020’s last 32 races, he only scored one top 10, ironically coming at the fall Talladega race.

But there was an uptick in Newman’s performance to start 2021. He finished seventh at Homestead-Miami Speedway and 13th at Atlanta Motor Speedway. Then came Bristol on dirt, a type of racing Newman cut his teeth doing. He even has a third-place finish at Eldora Speedway in the Camping World Truck Series.

Newman drove a complete race at Bristol, working his way from his 14th-place starting spot to finish eighth in the first stage, even after getting turned at one point by William Byron. He then worked his way up to fifth in the second stage, running around there for the rest of the race.

“I wish we could’ve won, I think if we had some track position, like I’m sure a few other guys would’ve said, we would’ve been that guy, but we’re happy with a top five.”

The result moves Newman up to 19th in points. He’s 23 points below 16th spot with plenty of time to work his way into the playoffs should more runs like Bristol come his way. Fortunately for Newman, this won’t be the last time Cup cars will race on dirt, as the NASCAR will run the Bristol dirt race again in 2022.

“It was awesome to me,” Newman said. “It was a great run for our Oscar Meyer Ford, which mattered the most to me. But for all the fans that stuck it out, I think it was an amazing event. Hopefully, we get to do it again.”

This is a comment on Fire on Friday: with 36 races before eliminations, how about 1/4 on short paved tracks, 1/4 on mile/half-mile dirt tracks, 1/4 on 1 mile+ tracks, 1/4 on street/road courses. That equally test driver/crew abilities across a wider spectrum of challenges.