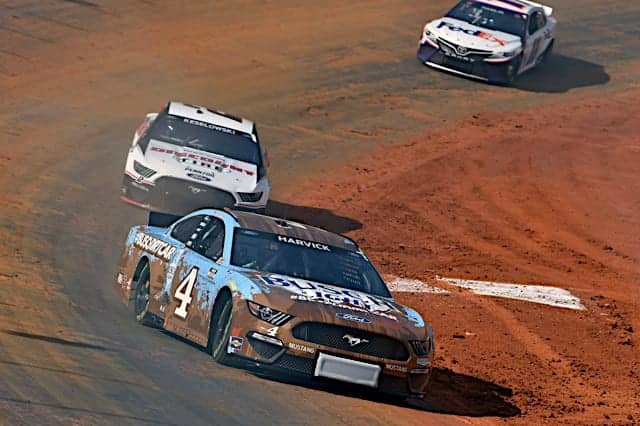 Was racing in the dirt at Bristol worth it? (Photo: Nigel Kinrade Photography)

It is a real shame that NASCAR’s weekend of racing at the dirt-covered Bristol Motor Speedway did not run as planned.  After days of torrential rains and serious flooding in northeast Tennessee, NASCAR will attempt to run the Cup and Camping World Truck series events on Monday (March 29).  The NASCAR Bristol dirt debut will simply have to wait.

Rainouts are never fun, but this one hits especially hard.  The prospect of seeing Cup Series cars on dirt for the first time in 50+ years generated a lot of anticipation, and hosting the event at Bristol, with its stadium-like atmosphere, only added to the excitement.  The Cup Series’ return to dirt racing created a groundswell of enthusiasm among fans and competitors alike.

However, not everyone was happy.  No less an authority than Richard Petty himself questioned NASCAR’s decision to bring dirt back onto the yearly schedule.  Back in October 2020, Petty commented in an article for Autoweek that dirt racing was “not professional” and that a return to dirt felt like NASCAR was “going backward.”  The Autoweek article resurfaced in a Reddit post on Friday (March 26), setting off a lively discussion about whether or not dirt racing belongs in the Cup Series.

“I have to be careful here,” Petty said, “because there’s some politics involved and I don’t want to annihilate NASCAR on this. I guess I’m looking at it from an old-time deal because we spent years and years and years trying to become a professional sport. Years and years to get away from that stigma. But dirt-track racing is not professional, so we’re going backward. It would be like taking a professional football team and going back to play at a high school field.”

At first glance, Petty’s statement may seem quite hypocritical.  NASCAR’s brand of stock car racing began with races on dirt ovals.  Dirt tracks remained a major component of the Cup Series schedule well into the 1960s, with over a dozen events held each year.  And while Petty was part of the generation that transitioned NASCAR from dirt tracks to paved superspeedways, wins on dirt ovals are an important part of his own racing accomplishments.  It was Petty himself who won the last time the Cup Series raced on dirt, at the North Carolina State Fairgrounds in 1970.

But before rushing to judge The King, it is essential to consider his entire statement, especially where he mentions the idea of professionalism.  Petty and his contemporaries did indeed fight a long, hard battle to establish stock car racing as a professional sport.  Anyone involved in NASCAR in Petty’s time, just as today, knows of the sublime talent and immense courage required to wheel a stock car.  But most people from outside the sport did not share that view.  Even competitors and fans of other motorsports disciplines looked at stock cars as the lowest form of auto racing.

As Petty mentions, NASCAR had to fight the stigma that its brand of racing was crude and unprofessional, especially when it came to dirt racing.  Almost from the beginning, NASCAR founder Bill France and his associates saw stock car racing for what it could be, rather than what it was.  France knew that in order for the sport to survive, he had to promote standards of professionalism in how NASCAR’s stakeholders conducted their business.  Growth required new races at new tracks, venues that would bring new fans and more money to the table.  Naturally, the small-town dirt tracks got left behind.

NASCAR underwent the same process that other major American sports did in the 20th century.  It outgrew its ancestral homelands, becoming mass entertainment in a way that even France himself might not have envisioned.  As someone who has witnessed all the changes, it is not surprising why running a dirt race might not sit well with Petty.  After pursuing a trajectory that led the sport away from dirt, does dirt racing have a place in the top echelon of NASCAR today?

There is no doubt the sport was outgrowing dirt racing by the 1970s.  But dirt racing has changed, too.  Much like NASCAR spurred the professionalization of stock car racing, sanctioning bodies like USAC and the World of Outlaws have lifted dirt racing to a more elevated place of respectability within the motorsports universe.  Racing a late model, sprint car or modified on dirt requires a recognized, specialized set of skills, just like competing in NASCAR, IndyCar or Formula 1.  Maximizing the performance of a highly technical machine demands a high level of driving talent.  In 1970, you could legitimately debate whether or not dirt racing was “professional.”  You could do the same for stock cars.  But considering the landscape of motorsports today, it is easy to find undeniably professional forms of both dirt and stock car competition.

In fact, you could argue that dirt racing has done something important that NASCAR has struggled to do: maintain a connection to its roots.  Because of its widely varying forms, levels and types of racing vehicles, dirt series remain an accessible type of motorsports for many up-and-coming racers in the United States.  That is not to suggest that dirt racing is cheap, as rising costs inevitably followed professionalization.  But it often feels like that community has the best of both worlds: national, professional circuits at the top with lower, localized divisions providing clear paths forward for aspiring racers.

In contrast, it feels like NASCAR spent the last 20 years or so running from its roots.  Once the sport got the national attention that it craved, its leadership started to take cues from how other major American sports operate.  Despite having achieved an undeniably professional status, NASCAR still acted like it had something more to prove.  The sanctioning body began to chase a type of fan that may never have existed, all while alienating many long-time supporters in the process.  As a result, the sport entered a period of declining ratings and prestige.  The quest for professionalism came at a price.

That is why the Bristol dirt race feels so special; it is an attempt by NASCAR to reconnect with its heritage.  While Petty is entitled to his opinion, this race is not a step backward or a sacrifice of the professionalism for which NASCAR fought so hard to achieve. Instead, the NASCAR Bristol dirt debut is intended to bring a blend of NASCAR’s old traditions with the new, elevated status of dirt racing.  Its billing as one of the biggest races of the season is deserved.

Having diverged 50 years ago, the Cup Series and the world of dirt racing are intertwined again.  The changes that both have undergone since then mean that they are no longer detriments to each other’s success.  Dirt racing can be a vital part of NASCAR’s identity once more.

Unfortunately, everyone just has to wait an extra day.

Perhaps this weekend is, despite all the pratfalls a reminder of why major league racing no longer run on dirt tracks.