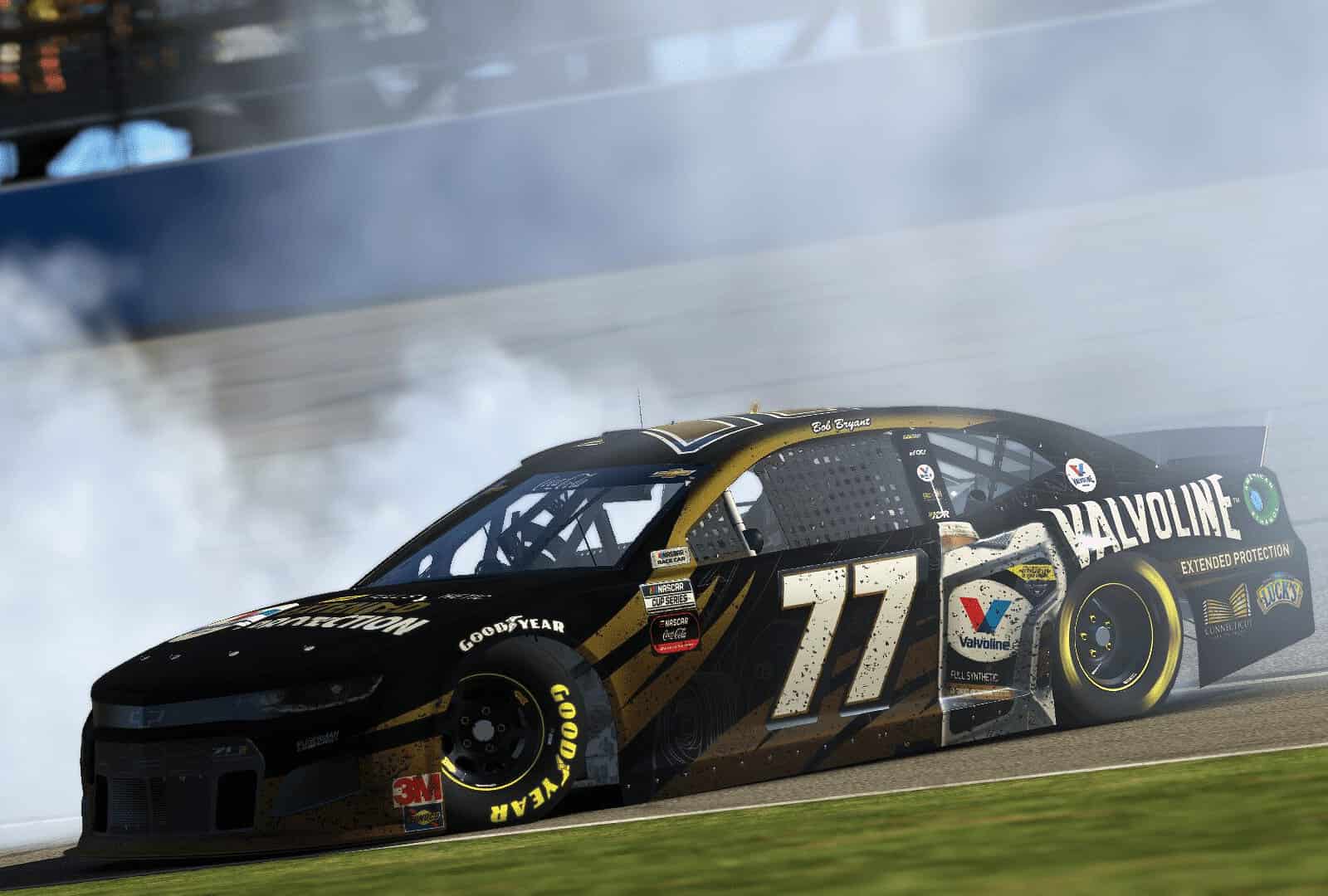 Round Five of the eNASCAR Coca-Cola iRacing Series found the tour at the virtual Auto Club Speedway on Tuesday night (March 30). After a tense race at Atlanta Motor Speedway just two weeks ago, drivers returned to an intermediate track, this time a two-mile oval with a wornout surface and multiple grooves.

After a tame and strategy-filled race compared to the previous two weeks, Bob Bryant of Kligerman Sport picked up the big win to score his first victory of the season.

A veteran of the division, Bryant was full of emotion after the race.

“I don’t know what to say, just (had an) incredible car. This series is unbelievably difficult — I’m honestly kind of shocked at the moment,” Bryant said after his first win in the series. “Strategy worked out, played it from the beginning, and we were either going to be hero or zero but we’re here, and we did it!”

Bryant has been in sim racing for a long time and has a list of accomplishments that few have been able to surpass. He noted that this win in the top level of sim racing is number one on his list.

Keegan Leahy of 23XI Racing started from the pole and looked to score his second win of 2021. While he arguably had the fastest car of the race, strategy was the name of the game over the course of the event.

Leahy led the opening stint of the race and seemed to be dominant after maintaining about a second’s lead over 23XI teammate Mitchell deJong and Michael Conti. However, Leahy pulled a strategy move by pitting under green on lap 20, hoping to catch everyone else off sequence.

A four-driver battle for the lead then ensued between deJong, Conti, Nick Ottinger and Bobby Zalenski. All four traded the lead back and forth throughout the next several laps until green-flag pit stops around lap 33.

Auto Club has been known for being a wide racetrack with multiple racing grooves over the years. The racing Tuesday showcased all of the great qualities of the racetrack, with three- and even four-wide racing thoughtout the entire event.

A total of 14 drivers tried the one pit stop strategy, led by Matt Bussa, Derek Justis and Isaac Gann early on. Without a caution, it was going to be tough for them to hold off the dominant cars all race long, but the one-stop strategy prevailed.

Bryant was the last to pit, with 48 laps to go, which then handed the lead back to Leahy after his very early pit stop. His final stop of the night came with 43 laps to go, but he cycled back to 15th once all of the two-stop drivers came in.

Conti and other leaders pitted shortly after Leahy this time rather than waiting 20 laps like the first round. It led mostly everyone on the two-stop strategy down pit road in hopes of chasing Leahy down, but the one-stop strategy for Bryant and others paid off in the end. Bryant made the pass for the win over Justis with 24 laps to go and never looked back.

The next race for the series will be in two weeks (April 13) at the virtual Richmond Raceway with coverage starting at 9 p.m. ET on eNASCAR.com and Twitch.tv/iRacing.